Weighing the pros and cons of microhousing, the newest trend in affordable living in Seattle. 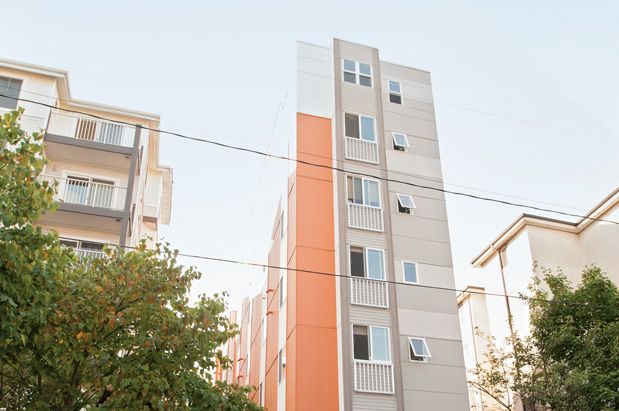 Brent Gunning has something in common with Henry David Thoreau: Both have lived in dwellings so small they could open their front doors while sitting at their desks. Thoreau built his own 150-square-foot cabin, while Gunning, a 24-year-old Microsoft software engineer with close-cropped hair and a chill demeanor, has been living for several months in a Redmond micro-apartment, a 140-square-foot space the size of some walk-in closets.

He pays $807 a month (by bank transfer—no checks accepted) for the furnished room at the LEED Platinum–certified Tudor Manor development. That includes all utilities, a free laundry room, Wi-Fi and parking, an option Gunning chose that raised his rent by $60 monthly. His space is as tidily packed as a lunchbox, with the desk and chair, one window, one bed, wall-hung shelves holding clothing and books, and a “convenience center” with mini-refrigerator and microwave. There’s a bathroom with shower, but no closet or kitchen. (Gunning uses a small, shared kitchen, with a stove, down the hall, which he says is rarely in use.) Gunning’s Fender guitar fits in an upright stand beside the door, and so far, no one has complained about his evening strumming.

“I’m saving up to buy my own place,” he says, and this was the lowest-priced decent month-to-month rental Gunning found near his work. Nearby are transit, a gym, parks, restaurants, hair salons and city hall. “Hands down, this was the best deal by a lot,” says Josh Born, another young tenant in one of Tudor Manor’s 61 units (his is a comparatively luxurious 220 square feet for $875 a month). Born moved here from Washington, D.C., after getting a temporary contract at Microsoft. The first month he was here, he paid $1,650 to rent a Bellevue studio. Small spaces—with matching rents—are the big appeal of micro-apartments such as this one at Emerald 10 on Seattle’s First Hill.

Gunning and Born are early adopters of a new housing trend: extra-small apartments with a shared kitchen down the hall—modern versions of the rooming houses of the past, which best suit one busy, budget-minded person who doesn’t have much stuff. Bellevue-based developer Jim Potter was part of a group that built the first modern micro-apartments in the Seattle area under the name “aPodments” on Capitol Hill in 2008. Since then, he and other developers, including Seattle-based Calhoun Properties and Bellevue-based Kauri Investments (the latter is also the developer of Tudor Manor), have built or are planning several more such buildings. Bryan Stevens, spokesperson for Seattle’s Department of Planning and Development (DPD), estimates there are currently 10 micro-housing proposals under review. (Since these are reviewed in the same way as are apartment projects, the department doesn’t officially single out these proposals.)

The trend is driven by the need for cheaper single living spaces, and it is evident in other cities as well. In New York, Mayor Michael Bloomberg held a contest this summer for new micro-apartment building designs. San Francisco is currently considering whether to reduce minimum apartment sizes to 150 square feet to make room for micro-housing by the bay.

“People who came to capitol hill and started raising families recognized they were living in a dense environment,” says Cummings, “But They didn’t expect the city to upzone without any process.”

Developers here didn’t have to wait for a vote. “Existing codes have allowed this housing option based on the current definitions for a ‘dwelling unit’ and ‘household,’” says Stevens. “A single dwelling unit can house up to eight unrelated people utilizing a single kitchen and common space.” Rents for the smallest rooms start at around $495 a month without parking, and include utilities, Wi-Fi and, usually, furniture.

The buildings have a fan base. Redmond’s Tudor Manor project helped the city win a Governor’s Smart Communities Award as an example of “smart growth.” Seattle Mayor Mike McGinn blogged his approval of the micro-apartment concept this January as an “affordable, transit-friendly option.”

A.P. Hurd, vice president at Touchstone, a Seattle-based commercial real estate development firm, and co-author of the recently published book The Carbon Efficient City, lived in an apartment of less than 300 square feet for three years in New York City, and supports the buildings. “Finding ways we can house people in more compact environments that are a good deal for them…is a good thing,” she says. “The less space you build, the less space you have to heat and cool—that reduces the amount of energy you use.” Even better, the buildings, situated in walkable neighborhoods near transit, accommodate—and even reward, with lower rents and sometimes transit credits—the carless.

Demand is driven partly by demographics. “We’re more and more of a singles society,” says Jim Potter, chair of Kauri Investments. Potter said his typical renters are in their early 30s and earn between $2,000 and $3,000 a month. Some tenants have a single-family home outside the city, and rent to avoid a daily commute. Potter describes his customers as “busy and active,” and in need of a place to sleep and shower.

But while shrinking digs might please politicians and some budget-minded renters, some neighbors, even those who support the idea of density, aren’t thrilled with the new buildings.

One objection is that here in Seattle, unlike in San Francisco or New York, the process of creating code to allow such buildings isn’t currently up for review—it’s old code. So micro-apartments pop up, sometimes with little warning, in places where neighbors have been expecting traditional four- to six-unit buildings. With micro-apartments, “unit” is likely redefined to mean an entire floor of eight tiny apartments with locking doors and bathrooms, plus one kitchen and one common area.

Ed Cummings is a business strategy consultant who has lived on Capitol Hill with his family for nine years, on a street of primarily single-family homes. He says he and his neighbors understood that they had moved into a multifamily zone, but were surprised to learn that a nearby single-family house was being torn down to build micro-apartments. It wasn’t evident from the building plans, and only came to light because the developer inquired about piggybacking on a neighbor’s sewer line to accommodate the large number of individual bathrooms. “People who came to Capitol Hill and fixed up old houses and started raising families recognized they were living in a dense environment,” says Cummings, “but they didn’t expect the city to upzone without any process.” He would like to see the city assess where such buildings are most appropriate. “There’s no valve controlling how many of these there are,” he says. “They should have a set of indicated and non-indicated conditions, public notice and a public comment period. I own a multifamily property myself,” he says. “Apparently I could go from four to 24 units, and tough luck on my neighbors.”

Cummings thinks this project is a bad fit for several reasons, including the lack of transit on the street, and increased traffic and parking demand in a noncommercial area—most of these buildings offer little to no parking for residents, and if it exists, it costs extra. (Potter claims only about 10 percent of his tenants typically have cars. The DPD’s Stevens says a series of code changes over the last 10 years means parking is not currently required for many apartments in most city neighborhoods.) Cummings also points out that the adjacent elementary school is an amenity that won’t be used by singles in micro-apartments, but could have been used by people in single or multifamily homes. Stevens responds, “Everyone needs housing, and our policy is to focus growth in areas that have the infrastructure to support it (i.e. parks, public transit, access to goods and services).”

But that policy, too, is causing some resentment. “I’m living in a neighborhood that’s already met its density goal,” says Patrick Tompkins, a Capitol Hill resident and former building contractor. He isn’t specifically against micro-apartments; his broader concern is that such buildings are being concentrated in neighborhoods like his, a block east of Group Health, where traffic is already a “circus.” “How much density are we supposed to take?” he asks. “If density is such an important goal, then why aren’t we pursuing it citywide?” During a recent kerfuffle over another longstanding zoning loophole that is allowing developers to wedge second homes onto single-family properties in neighborhoods such as Green Lake and Queen Anne, Seattle City Council member Richard Conlin took the side of neighbors who objected, and said he’d work to close the loophole, but he’s made no such moves to change micro-apartment codes. “We’re getting the sense that we’re being treated like second-class citizens,” says Tompkins of his neighborhood.

The city has no plans to change the codes, but it is “tracking complaints,” says Stevens. “We are watching to see if there are any unintended consequences from such micro-units.” Tompkins has another suggestion. “If they’d like do an experiment and build some of these in Madrona on Richard Conlin’s street, I’d be happy with that.”