The year in planes, trains and automobiles…and tunnels, bridges and ferries 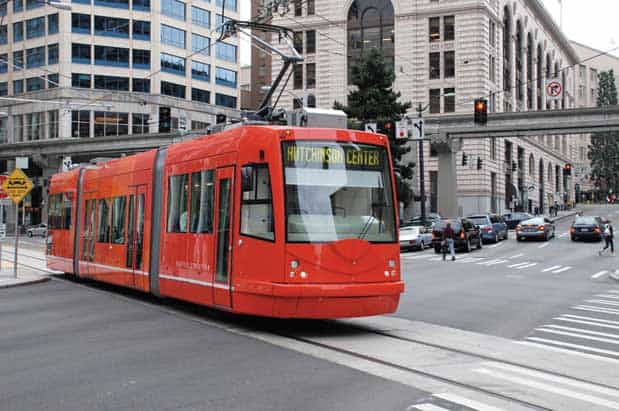 !–paging_filter–p[trains]brstrongMud Bath /strongbrCommuters using Sound Transit’s Sounder north line in Everett during the 2012–2013 winter are forced to secure alternate transportation 122 times due to mudslides, rocks and other debris blocking the tracks. brbr[tunnel]brstrongTunnel Vision/strongbrIn April, Elizabeth Campbell, a Magnolia resident and relentless objector to removing the Alaskan Way Viaduct (She loved car rides on it as a child! Earthquakes be damned!) tries to launch another initiative against the tunnel. If all goes Campbell’s way, the initiative will reach the ballot next November about the time Bertha finishes boring a giant hole from SoDo to South Lake Union.brbr[bridges]brstrongGames of Bridge/strongbrIn late May, an oversize truck clips the girder of a bridge spanning the Skagit River along I-5 north of Seattle. The bridge—and two vehicles—fall into the water below. Miraculously, there are no fatalities, but the accident spurs panic about old bridges. In new-bridge disasters, engineers for the State Route 520 floating bridge over Lake Washington say the cost of repairing cracked pontoons may reach $400 million ($250 million more than what’s in contingency budget). brbr[streetcar]brstrongThe Missing Link /strongbrIn the thick of the June primary race, Mayor Mike McGinn proposes a plan to implement a downtown streetcar that will connect the First Hill streetcar to the South Lake Union streetcar. (We’ve heard that if you say the word “streetcar” three times in front of a mirror, Senator* Ed Murray gets his wings.) brem*Ed Murray was elected Seattle mayor after our December issue went to press./embrbr[bikes]brstrongSpin Cycle/strongbrDespite speed bumps in New York City’s bike-share rollout, Seattle’s Puget Sound Bike Share pops a wheelie when Seattle City Council votes in early September to unanimously approve a 500-strong bike share to launch in 2014. brbr[cars]brstrongAlong for the Ride /strongbrIn nouns-that-become-verbs news, Seattleites have been Uber-ing, Lyft-ing, Sidecar-ing and Car2Go-ing in sweeping numbers this year, much to the dismay of local taxi drivers, who angrily flocked to City Hall in August to protest illegal infringement on their right to provide inconvenient, often tardy and sometimes surly service. brbr[tunnel]brstrongCan You Dig It? /strongbrWe cheered when the earth-boring beauty named Bertha finally embarked (after much vacillating) on her mission to dig the Highway 99 tunnel on July 30. We jeered when she stopped drilling for several weeks because of disputes over whether the longshoremen’s union or the building trades union would remove the excavated dirt. We cheered again, though with somewhat less enthusiasm, when drilling resumed, ever so slowly. brbr[planes]brstrongFlight Status/strongbrIn September, Seattle-based Alaska Airlines earns first-place ranking for fuel efficiency among mainline airlines in the U.S. (Lest we indulge in too much self-congratulation, keep in mind Greyhound buses operate, on average, three times more efficiently than planes.) nbsp;brbr[light rail]brstrongNext Stop: Eastside/strongbrBellevue developer Kemper Freeman Jr. to Sound Transit: Not in my neighborhood. Good thing the Washington Supreme Court disagreed in its September ruling that gave a green light to a light-rail line that will connect Seattle, Mercer Island, Bellevue and Overlake with transit service.nbsp; Easily accessible, affordable car-free option across Lake Washington: 1. Freeman: 0.brbr[light rail]brstrongStaying on Track /strongbrIt’s a miracle no one was crushed by dropping jaws when Sound Transit announced that the U-Link light rail connecting downtown to the University of Washington looks as though it will come in ahead of schedule and under budget.brbr[cars]brstrongOne Hot Ride/strongbrIn October, a rubbernecker’s video of a Tesla Model S electric car engulfed in flames on a Kent road causes investors to freak. Tesla loses $4 billion in market value. brbr[planes]brstrongA Dream Deferred/strongbrBoeing’s 787 Dreamliner takes even more heat when a flight bound for Tokyo on October 9 is diverted back to San Diego due to a possible problem with the aircraft’s deicing system. One week later, an 8-by-4-foot piece of fuselage falls off the bottom of an Air India–operated Dreamliner in midflight and lands near India’s Bangalore airport. brbr[ferries]brstrongFire Sale/strongbrKING 5 News reports that Washington State Ferries is auctioning nine never-deployed, multimillion-dollar generators. The equipment had been sitting idle for five years, ever since ferry engineers realized installing the generators could cause an electrical explosion (see Tesla)./p