The beers are alive at this Capitol Hill hot spot 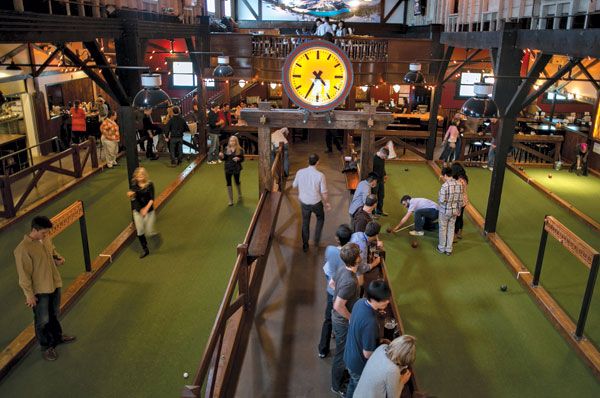 Beer Hall Bonanza
With 11,000 square feet and a dark wood aesthetic, Von Trapp’s definitely has a signature beer-hall style. It’s the details that keep the style from feeling cliché, however, with stunning Viennese chandeliers, a Parisian Metro clock, a bistro wall from Germany and other pieces, all uncovered by the owners on a research trip to Europe. Naturally, the German bierhaus vibe would be wasted if the beer wasn’t up to snuff. But bar manager and beer aficionado Doug Wargo (late of Quinn’s) has corralled a strong selection of about 100 European and West Coast beers, on tap and in bottles. I suggest the German Veltins pilsner (sizes ranging from a 2-ounce taste to a 2-liter boot, enough for three to share, at least), which has a summery body and a hint of bubbly bitterness.

Cocktails and Games
While there’s a focus on beer, Von Trapp’s also boasts a swell cocktail menu crafted by Bastille’s bar guru, Erik Carlson (previously at Moshi Moshi). My pick is the Edelweiss Punch ($11), a concoction of rum, apricot brandy, Meletti amaro, pineapple syrup, lime, weissbier and nutmeg. With the host of libations offered, you’ll want to stock up on the hearty culinary options from chef Pete Fjosne (former Bastille sous-chef). While folks rave about the house-made sausages, including the Cheddarwurst and the Nuremberg, which come in a bun or plated ($8–$12), and the pretzels (made daily, thought not served as warm as we’d like), including a horseradish-cream-cheese-stuffed version ($5), don’t skip the Käsespätzle ($12). The ultimate German comfort food, it’s rich and gooey, with thick pasta and cheese topped with fried onions and tangy dried tomatoes. Yummy. After that, you’ll probably want to head to one of the full-size indoor bocce courts. Put your reservation in for a court before eating, however, as they’re snapped up quickly.