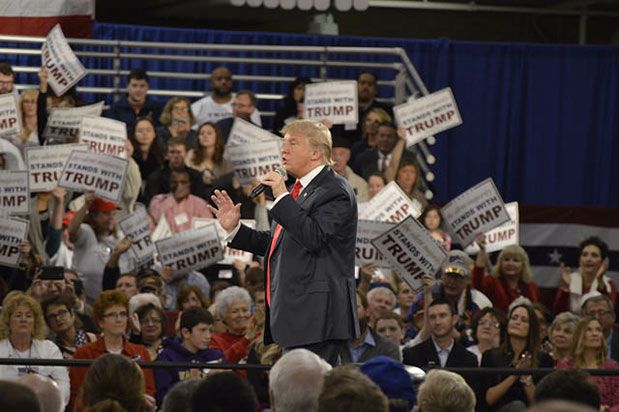 Susan Hutchison, chair of the state GOP, said last week that Washington was a “swing” state and that Donald Trump could win Washington. Such optimism is typical of state party chairs, who are inevitably cheerleaders for their team.

Will Trump win the state?

Certainly, anything can happen. This election cycle is defying some conventional wisdom. Hutchison is counting on Trump helping to turn out the GOP base and says her party is focusing on that, plus flipping Snohomish County, which she describes as Washington’s “Ohio,” meaning the key swing county in the state. Still, there are big challenges.

Washington last went for a Republican president in 1984 (Ronald Reagan), and has gone for the Democrat ever since. The last GOP governor elected was John Spellman in 1980. Democrats dominate in statewide offices—the only one consistently won by Republicans is Secretary of State. Presidential election years usually see higher turnout for the Democratic base which is in the most-populous and fastest-growing metro areas of the state. Democrats often use the presidential campaign to nationalize their election message, and they will certainly do so with Trump who is not even being embraced enthusiastically by some state Republicans—specifically the mainstream candidates at the top of the ticket: Bill Bryant, the gubernatorial candidate, hasn’t endorsed Trump and dodges the question, and Chris Vance who is running for U.S. Senate has said he will not vote for Trump.

Washington does have a significant block of voters who are comfortable splitting their votes, and this is where Hutchison takes encouragement. In 2012, for example, Barack Obama won Washington with 56% of the vote to Mitt Romney’s 41%—a hefty margin. But Jay Inslee won the governorship with roughly 52% of the vote to Rob McKenna’s 48%—a much closer contest. That translates as some 100,000 voters who likely filled in the blanks for Obama-McKenna. If Bryant can pick up those ticket-splitters, plus get more turnout from the base due to Trumpism, he might have a shot.

But Hutchison is also fighting a battle, highlighted at the convention in Cleveland, which is that many Washington conservatives don’t like Trump (the state delegation went for Ted Cruz, who famously did not endorse Trump at the convention last week, for which Hutchison called him a “traitor”) and the fact that many of the state’s high-profile, mainstream Republicans, like McKenna—the class of the state party—and respected elders like Slade Gorton are not supporting Trump. So Hutchison is trying to mobilize a base that’s divided at both ends of the GOP political spectrum, and Hutchison’s challenge is to heal those rifts, if she can.

Hutchison’s hope is that state Republicans unify behind Trump. On the other hand, anti-Trumpism will be a mobilizing and motivating factor for Washington’s Democrats, though some Bernie Sanders supporters might be less than enthusiastic. And if Washington looks “safe” for Hillary come election day, you might see some progressives peel off to “vote their conscience” for third-party candidates.

National momentum could be a factor. If Trump populism sweeps the nation, Washington could be impacted. Perhaps the last big tide of conservatism to hit the state was during the so-called Republican revolution of 1994, lead by Newt Gingrich. That was an off-year election, not a presidential one, but it had profound impact on the state’s Congressional delegation: Five incumbent Democratic representatives were defeated on election night, including Tom Foley, the first Speaker of the House to lose office since the Civil War era. Also losing: Maria Cantwell, Jolene Unsoeld, Mike Kreidler, and Jay Inslee. Clearly, some of these candidates made comebacks—Cantwell is a U.S. senator now, Inslee governor—but all toppled due to a political earthquake on a scale few anticipated.

Trump taking Washington is unlikely if political norms apply. Nate Silver, a premier calculator of election odds currently gives Hillary Clinton a 58% chance of winning to Trump’s 42% nationally, but the odds are even greater for victory here in Washington where Silver currently gives Clinton a whopping 83% to 17% edge. So no, we are not a swing state. Still, in a year when candidates are defying norms, history is merely a guide, not a prediction. Clinton holds the high ground and it’s Hutchison’s troops who have the uphill battle.

Updated: This story was edited to reflect the correct spelling of Susan Hutchison.