But have they dimmed the flavors too much at this Pike Place hideaway? 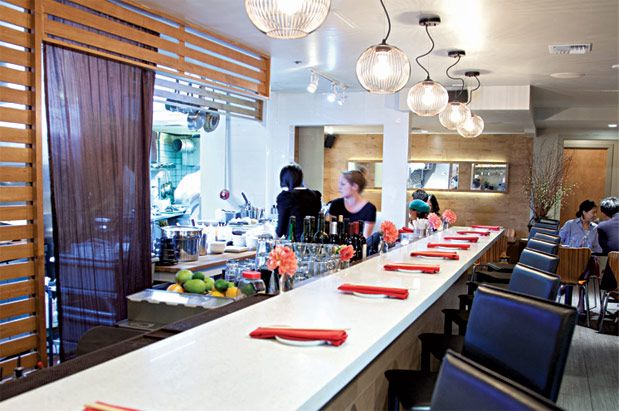 This article originally appeared in the October 2012 issue of Seattle Magazine.

The concept behind Cha:n is approachable and modern Korean food, and whether it works for you depends on whether you think the funky, fiery cuisine needs more approachability or modernization. Owner Heong Soon Park, who remodeled what used to be part of Bacco (he still owns both) to create this downstairs hideaway, has gentled authentic flavors here without ruining them. Chefs in the open kitchen cook with quality meats and produce from their Pike Place Market neighbors, making for specials like a “farmers market bibimbap” that no doubt had fresher vegetables and more humanely raised bulgogi beef than any of my usual Korean haunts up Highway 99. I didn’t mind that it was half the size of those strip mall specials for a similar price—better ingredients hike the bottom line—but the usual punch was tamed too far for me. Likewise, the fact that a dense mung bean pancake arrived greaseless and piping fresh impressed us, but its accompaniment of sprightly microgreens just came off as a culinary anachronism. (Finger-licking Korean fried chicken wings, though, are worth a special trip: crunchy-sweet, generously portioned, blisteringly hot and juicy.)

Cha:n’s menu is divided into “traditional” and “modern” sections, but I didn’t see a significant difference between them. If food were the only issue, I’d take Korean newbies to Lynnwood or Federal Way and let them sink or swim in the sharper, spicier flavors. But Cha:n does stand out with its servers: They’re very aware the food might be a new experience for diners, and happily, cheerfully, guide them through.