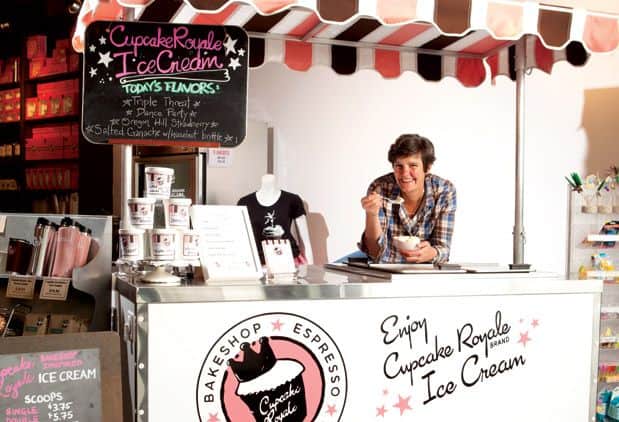 It’s hard to recall the time before cupcakes were considered an acceptable—and sought-after—adult dessert, but when Jody Hall founded Cupcake Royale (cupcakeroyale.com) in 2003 in Madrona, hers was not merely the sole cupcake shop in town, it was the only cupcake-specific bakery in America outside of New York City.

Considered a risky endeavor by many (could a store survive on cupcakes alone?), Hall’s venture proved more than successful: Cupcake Royale now has five locations, and a sixth opens near the Pike Place Market on June 30, 2012 (108 Pine St.; 206.883.7656). This new downtown spot will showcase Hall’s latest innovation, “bakeshop-inspired ice cream,” featuring delectable, made-from-scratch flavors—some inspired by beloved Cupcake Royale cupcakes, such as Stumptown coffee with ganache ribbon, and some containing actual chunks of cake, such as red velvet cupcake and salted caramel cupcake.

The downtown shop will serve scoops, shakes and sundaes, as well as ice cream flights (à la beer and wine) with toppings. The Capitol Hill and Bellevue stores will also be scooping; other stores will serve the ice cream in pints. In all cases, we applaud Hall’s decision to go à la mode.