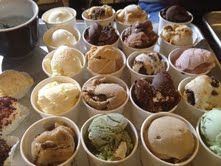 Cake and ice cream go together like PB&J, but until now none of our local cupcake shops made both: you’d have to get a cupcake here and then get the ice cream there. Not for long! Demand, meet supply: Cupcake Royale is launching a cupcake-inspired ice cream line this summer. Flavors will include Salted Ganache with Oregon hazelnut brittle: Bananza, with roasted bananas, caramel and fudge; Whiskey Maple with “bacon crack”; and pistachio with honey-nut nougat (yum!).

Not only that: Cupcake Royale will be taking over the former Chocolate Box space at 108 Pine Street (just a half-block from Pike Place Market), where they’ll sell cupcakes, ice cream and cups of Stumptown coffee; the Chocolate Box, which currently shares the space with Molly Moon’s, will move into a smaller space right next door. The opening of the Pike Place-area Cupcake Royale is set for early July, as is the launch of the ice creams, which will be scooped at the Bellevue, Capitol Hill and 108 Pine locations (though as of June 1st, there’ll be an ice cream cart in front of the 108 Pine location doling out scoops).