The Debate over a Pretty Lake on Snoqualmie Pass. Who’s Right?

With drought comes tough choices, and the argument over Lake Kachess hints at future battles 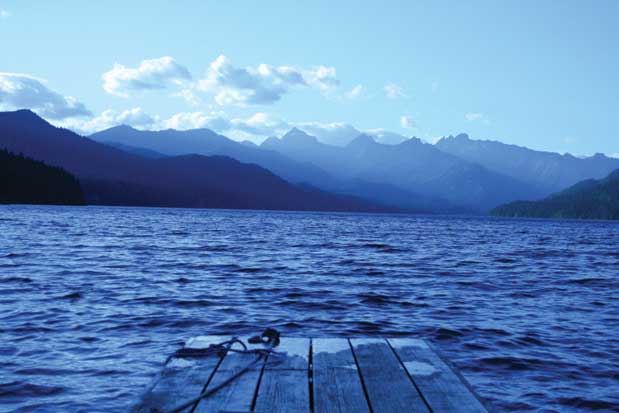 On this side of the mountains, we don’t think too much about water. Even with a dry winter and Governor Jay Inslee declaring this a drought year for the state, Seattle’s reservoirs are mostly full. Turn the tap and get all the water you want.

But take Interstate 90 across the Cascades, and it’s a very different picture. Lush, dense forests give way to arid landscapes, punctuated by swaths of green, irrigated fields. Water is scarcer, and the demands for it are great. For many decades, farmers, anglers, hunters and environmentalists have debated about how this resource should be shared, and this year, that debate got very personal for homeowners living on the banks of a picturesque lake near the top of Snoqualmie Pass.

It started with a federal plan to increase the amount of water drawn from Lake Kachess to supply water for irrigation in the Yakima Valley, raising farmers’ hopes for the prospect of more water for their crops and concerning area property owners. “We didn’t buy property and build a house to have a view of the rocks,” says Shoreline resident Ron Knowles, who has a vacation home on the lake. But at the same time, he doesn’t want to be selfish. “I don’t want crops to go dry so I can put my toes in the water.” That may be what it comes down to.

First, some background: All of the water in the Yakima Valley is accounted for. “We know where it all goes, because every drop of water has been litigated,” says Scott Revell, manager of the Roza Irrigation District, one of six in the Yakima Valley that administer water rights.

The farms in the Yakima Valley need lots of that water, so much that mere gallons aren’t up to the task of measuring it. Instead, water managers talk in terms of acre-feet. (One acre-foot is enough water to cover 1 acre to a depth of 1 foot, about 325,000 gallons.) Farmers in the valley have rights to more than 2.4 million acre-feet of water. In years when there’s plenty of rain, that’s not a problem, but this year, some farmers will likely need to scrape by with less than 40 percent of what they’re entitled to.

It’s a year like this one that has farmers eyeing the big reservoir that is Lake Kachess, which sits off I-90, about 20 miles east of The Summit at Snoqualmie. Water from the lake is already used for irrigation purposes and has been for more than a century.

The proposed project would install a new pipe to extract water, and position the pipe about 80 feet lower than the current outflow. This would allow access to about 200,000 more acre-feet of water and could end up exposing, on average, 200 feet of what had been lake bed, turning lakefront houses into mudflat-front houses. And it’s a view that could last for several seasons: If Kachess is taken all the way down to the new pipe, it would take 101 days to empty and between two and five years to refill, according to a draft environmental review of the project.

The Federal Bureau of Reclamation, which is spearheading the project with the state Department of Ecology, stresses that the lake would only be tapped in a year when some farmers would get less than 70 percent of the water to which they are entitled. In recent memory, droughts of that level happened in the multiyear drought of 1992–94, and the single-year droughts of 2001, 2005 and this year.

“Do we expect that to occur every year? No,” says Wendy Christensen, who is managing the project for Reclamation. “Kachess is the ‘emergency break-the-glass’ scenario.” Christensen says the lake would only drop by the full 80 feet in the case of a multiyear drought.

One beneficiary of that new pipeline could be the bull trout population. The fish spawn in the river that flows from Lake Keechelus, but that river often flows too quickly to be a friendly spawning ground. Piping extra water into a different lake—thereby reducing the water flow into those streams—should help trout habitat.

Opponents call the project—which will take years to get approved and funded and could cost between $600 million and $680 million—a colossal waste of money.

Water managers, says Ken Hammond, are looking at the problem from the wrong side. “It’s more like a ‘longage’ of demand than a shortage of supply,” he says. Hammond is a retired professor of geography from Central Washington University who has been active in water planning for decades. “Uniformly across the West, they’ve allocated more water than actually exists.”

Hammond argues that what’s really needed is for farmers to accept that in some years there just isn’t enough water for all of
them to be able to grow what they might like. He says farmers need to adjust and grow crops that need less water.

Hammond says that the project isn’t economically the best answer. There are complex economic formulas that determine if a project can work or not. On the whole, this project meets those standards, but largely because of the benefits to the trout. “The fish are carrying the water to the land,” says Hammond, who believes those fish-related benefits could be completed without the irrigation portion.

Hammond calls for charging farmers for the water they use, which may lead to more conservation, a different mix of crops with some fields allowed to go fallow, and water swaps between rights holders.

Revell, of the Roza Irrigation District, says some farmers are already doing that. Water swaps are common. Farmers are installing different sorts of irrigation, at least across his district. In years like this, the growers make decisions about which crops will be more profitable and cut others off, in some cases, bulldozing fruit trees to clear the way for less water-intensive crops in the following year.

He acknowledges that some places grow timothy hay—a crop used for livestock and sometimes exported that some critics suggest is too water intensive—although there isn’t much of it in his district. However, he’s quick to note that exports drive a large part of this state’s economy. In western Washington, we usually think of planes and software, but agricultural products bring a lot of money into the state as well, Revell says.

Meanwhile many lakeside residents aren’t persuaded that a lake-draining pipeline is the answer to getting water to the farmers.

A few hundred families have houses near the lake, some of them living there year around. They fear that drawing down the lake levels will alter the landscape and ecosystem in a profound way.

“Kachess is one of the most beautiful lakes in the state,” says John Wenstrup of Seattle, who has a second home on the lake. “There is a clear set of costs not being included in this, far beyond the cost of building a pipe.”

Christensen of the Bureau of Reclamation acknowledges that the lake may not look as pretty some years, and that homeowners’ concerns are real, but says those concerns are overstated. The lake level would certainly drop, but there will still be a lot of lake left, she says. “People think they’re going to be looking at a mud hole, but they’re really going to be looking at 386,000 acre-feet of water,” she says.

But views are not the only concern. Many of the houses get their water from private wells. If the lake level drops, homeowners fear the water table could go along with it, leaving many with no source of water. Firefighters also count on ready access to the lake water.

“We have no idea what it would do if you drop it another 80 feet,” says Bob Agrisano, a Fall City resident and president of the Kachess Community Association.

Agrisano and others around the lake are upset that the draft environmental impact statement, while saying that there would be steps taken to mitigate problems such as falling water levels, doesn’t actually say what those steps would be. He notes the plan could actually draw the lake down below its natural (pre-dam) water levels.

“It’s very, very incomplete,” Agrisano says. “You can’t move forward with something this dramatic if you don’t know what its impacts are going to be.”