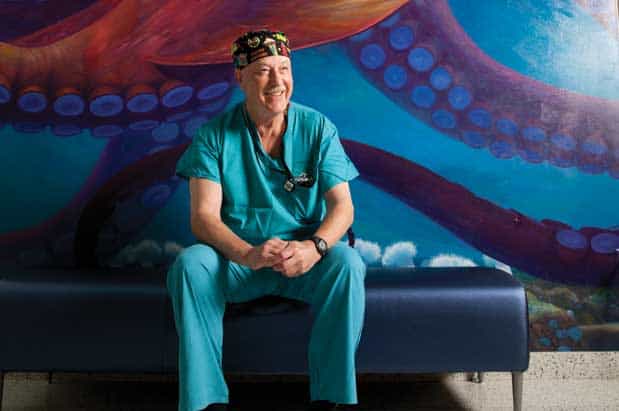 In all the years Seattle magazine has been asking local doctors to nominate health care practitioners for our Top Doctors list, only one doctor has received top votes in his specialty every single year.

It’s probably no surprise to his colleagues and patients that this man is Joseph Gruss, M.D., chief of Craniofacial, Plastic and Reconstructive Surgery at Seattle Children’s Hospital.

During his career, which has taken him to London, Toronto and Seattle (since 1991), the world-renowned surgeon has pioneered new approaches for repairing faces malformed by birth defects and violence—in many cases, encountering resistance and criticism before his techniques became widely adopted. Today, patients with life-threatening conditions travel from around the world to be treated by Dr. Gruss and his team, and he is still tackling some of the most difficult cases of his career.

We asked this approachable doctor who grew up in Johannesburg (and retains a South African accent) a few questions about his work, as we add one more accolade to his many laurels.

What was your most challenging case?
Unfortunately, I have challenging cases all the time…that’s what I do most of my life, the worst cases. Just this last week, myself and Dr. Amy Lee, the neurosurgeon, had a newborn with this enormous tumor that took up half the head. It was a malignant tumor, we had to operate; it was a pretty scary case. That’s probably one of the most complex cases I’ve done.

Did you ever think of pursuing a different career?
When I was 3 or 4 years old, I had a ruptured appendix—and those were the days when antibiotics were just starting, and I was sick for a long time. That’s the only thing I really remember from my early childhood. But after that, I don’t know, I always read lots of medical books as a kid. I wanted to be a doctor from an early age.

How is working pediatric plastic surgery unique?
I never realized it when I went into it, but you’re like a family doctor because it’s virtually the only specialty in medicine where you often meet families for a prenatal visit before the baby is born, and then when these kids are born with, say, a cleft lip or something like that, you follow the kid until they’re fully grown. It’s very similar to being a family doctor; you get to know the whole family unit. That’s one of the beauties of what we do. Most surgeons, if you have a problem, you operate, and then the patient gets better, and you never see them again. We have to treat the kid and the family unit for a long time, so that’s one of the things that is really fascinating.

What has changed the most since you began practicing?
The access to technology has changed tremendously. We do a lot of our planning for big surgeries on the computer now. Sophisticated radiology has made it much easier for us to diagnose things in advance for complicated surgeries. And the safety of anesthesia and ICUs has dramatically improved the safety of the complicated surgeries we do.

What future development do you think will transform craniofacial surgery?
I think that the big thing is going to be genetic diagnosis of conditions, and whether we’re going to be able to prevent some of the severe deformities that we now see.

What will be the big challenge going forward?
One of the big problems of medicine is my generation of surgeons has done so many cases and has such an enormous experience, it’s not going to translate to the young surgeons coming up now. They’re never, ever going to have the same experience. So it’s much more difficult for the young surgeons to conceptualize an operation like I can. And I think that they’re going to need a lot more access to sophisticated computerized planning and models and things like that.

The new generation of doctors doesn’t want to work as hard as we did, and that’s not a bad thing, because we didn’t exactly have a great life—we’d work all the time. As trainees, we’d work regularly 120 or more hours a week. Now they’re restricted, although you think an 80-hour workweek is still a lot of work compared to the general public, but to train as a sophisticated surgeon, you need to have dedicated a lot of time. So it’s not the same anymore. It’s not just in surgery; it’s in everything.

What aspect of your job might surprise us civilians?
Medicine’s got a bad rep. You read about people who tell their kids not to [study] medicine and all this, but it’s hard to understand that, because it’s such a great profession. I often work all day, hard as anything—stressful—and I keep thinking that I’m actually getting paid to do this because it’s such fun.