Diagnosed with bipolar disorder, the Seattle cartoonist wonders if ‘crazy’ is crucial to creativity. 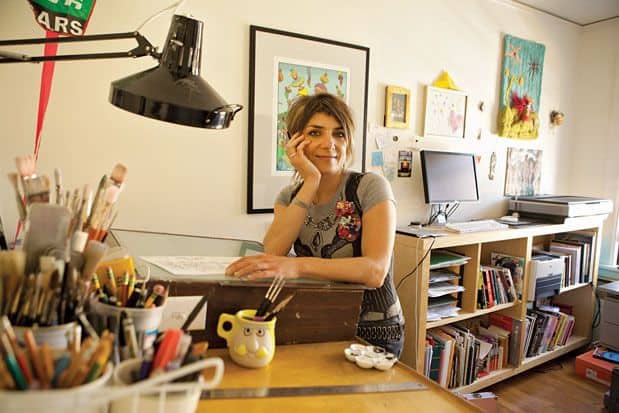 If you ever find yourself crying at work, take Ellen Forney’s advice: “Don’t wipe your tears. Don’t change your posture. Just keep working until you get to the point where your nose is running and you’re kind of a mess—then get up, go to the bathroom, blow your nose and wipe your face. Take a deep breath and go back to work.”

She would know. The Seattle cartoonist cried a lot when she set out to create her new book, Marbles: Mania, Depression, Michelangelo, and Me, a graphic memoir coming out this month. Best known for her work in The Stranger, especially the autobiographical comic strip “I Was Seven in ’75” (compiled as a book, Monkey Food), Forney is no stranger to drawing herself (sometimes literally) naked—but Marbles takes self-revelation to new heights.

The book takes place in Seattle in 1998, when Forney, 29 at the time, was first diagnosed with bipolar disorder. Recounting therapy sessions, medication trials, and bouts with both mania and depression, Forney tapped into emotional memories to re-create, in detail, the highs and lows of that uncertain time. Sprinkled with plenty of self-deprecating humor, Forney’s story is relatable and entertaining, in spite of its heavy subject matter.

Originally from Philadelphia, Forney is now 44 and living in Capitol Hill, where she teaches comics studio classes at Cornish College of the Arts. She has published two other books, I Love Led Zeppelin, a collection of her comics reprinted from various publications, and Lust, a compilation of X-rated single-panel cartoons adapted from The Stranger’s Lustlab personals section; she also created comics and illustrations for Sherman Alexie’s young adult novel The Absolutely True Diary of a Part-time Indian (which received a National Book Award).

She didn’t start working on Marbles in earnest until 2008, more than 10 years after being diagnosed. “I was keeping a lot of detailed journals at the time, and thank god,” she says. “One symptom of mania—and of being human—is bad memory.” Through informal interviews with friends and family, and her medical records, she was able to reconstruct this segment of her past as if it happened yesterday.

Forney even took pictures of herself re-creating past events in order to have reference photographs to draw from. That meant she had to become 29 years old again, putting her hair into punky spit curls, donning her old clothes and “too many necklaces,” and reenacting scenes, such as hugging trees in Seattle’s arboretum, while crying and barefoot. Confronting these memories was difficult but eventually therapeutic, she thinks.

The diagnosis was devastating for Forney at first: The personality traits that she once thought made her unique suddenly boiled down to criteria for a textbook psychological disorder. She worried her creativity was just another symptom that would be potentially eradicated by medication. She plumbed the biographies of famously unstable artists, such as Vincent Van Gogh, looking for hope, or for a silver lining; maybe “crazy” is good for creativity? “Even as the weight of this news sank in,” she writes early in the book, “the sense of heaviness was alleviated by a backhanded sense of cred.”

The book is hugely compelling, thanks to Forney’s fluid and funny tell-all style. Memories of clownish mistakes and moments of weakness most of us would prefer to keep locked away Forney sketches in detail, seemingly laughing while she does it. She covers everything from struggling to give up smoking pot to losing the ability to orgasm (among other side effects she experienced from her medications). All sides of herself are conveyed in varying styles: “Manic Ellen” is a loopy caricature with spinning eyes or outlandish, curling appendages. “Depressed Ellen” is a motionless lump on the couch, or a recoiled, meek version of her stronger self.

When you’re sure she can’t reveal any more, Forney goes a step further. For several pages, comic panels give way to captionless, full-page scans and photographs of actual drawings from old sketchbooks. The haunting self-portraits and other spooky images force the reader to linger in the kind of terrifying quiet Forney must have experienced during her darkest days.

Forney hopes the book can be useful, the way other memoirs, such as William Styron’s Darkness Visible, helped her. For that reason, she takes it well beyond your garden-variety confessional: The memoir is packed full of carefully researched, hand-drawn infographics (“What Is a Mood Disorder Anyway?”), step-by-step guides such as “How to Swallow Your Pills in One Gulp,” practical tools (a calming exercise called “alternate nostril breathing”) and a pile of footnotes. She’s not promising a cure or a recipe for success. But Marbles hits an important point home: Coping with mood disorders is not a battle of wills that takes place solely in one’s imagination. It demands real and concrete resources: therapy, medications, time, a lot of money and good people in your corner.

Forney has been seeing the same psychiatrist for more than 13 years, and she feels OK now. She still has to track her moods carefully and pay attention to her eating and sleeping habits. “It’s an effort. It’s something that I carry,” she explains. “I just know how to carry it now.”