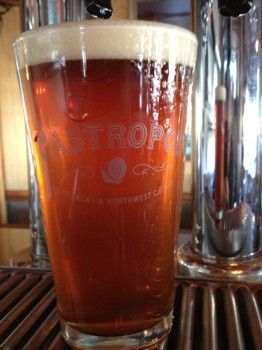 Cody Morris’s Sodo nanobrewery, Epic Ales, is a beer-lovers oasis. Tiny, with just a few stools front and center behind which Morris often stands, tasting folks on beer and talking shop, it’s the sort of place you really want to succeed, but still don’t want to tell anyone about.

Morris makes clever but always tasty brews, many infused with food and inspired by the seasons. Beets, tea, mushrooms, cinnamon, peppercorns, lemongrass; they’ve all been put to use.

For the last couple of years, Morris and chef Travis Kukull have been taking their food-and-beer pairings further, cooking up short menus specifically designed to pair with Morris’s brews. Cold smoked oysters, watercress with smoked trout, even Brussels sprout okonomiyaki with a fried duck egg, for starters.

There’ve also been a slew of beer brunches and the occasional five course dinner, with beer pairings, which always sold out mighty quick. The interest was there. And so, in their downtime, the duo were at work building out an adjacent space to feed their fans, which they planned to call Gastropod. But the buildout took a long time, almost two years. Now, having spent the last couple of weeks in soft-opening mode, they’re ready to throw open the doors. “We’ve been super excited this entire week. Our soft opening as gone really smoothly,” Morris told me today.

Which means it’s time to party. Gastropod, Epic Ales’ adjacent gastropub, will celebrate its official opening this weekend with a pig roast and veggie paella party, Sunday, from 4pm to 8pm (details here).

And! Beginning next week, Gastropod will be open Tuesday through Saturday from 4pm to 10pm with a menu that, Cody says, changes almost daily. There’s room for 25 in the new space (plus a little extra room for larger parties). I’ve got a feeling the place will have no trouble filling up. That okonomiyaki sounds pretty good, doesn’t it?