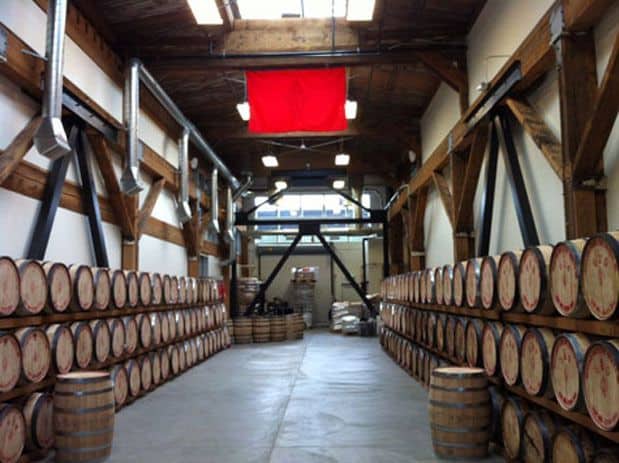 !–paging_filter–pOur ever-expanding distillery scene has been unleashing, and will soon be unleashing, a wide variety of awesome new spirits and such, with more to come within weeks of this very writing. I think (and sure, I’m biased) that we live in the most vibrant distillery state in the country. The fact that the following list of tasty news is longish proves my point./p
pstrongWestland Distillery Deacon Seat American Single Malt Release:/strong Though it has been toiling and tasting in a South Park location for three years, a href=”http://www.westlanddistillery.com” target=”_blank”Westland /ahas just now opened a new distillery location to the public in SoDo (2931 First Avenue South) and has released its first single-malt whiskey: Deacon Seat (375 ml bottle, around $33). A one-time only bottling, it uses five special malts (or malted barley), and has been matured for at least 26 months. The aroma and flavor is exquisite, orange marmalade at the beginning, easing into scents and tastes of pastries, vanilla, red fruits and more. Westland’s American Single Malt Whiskey, its flagship product going forward, comes out on 10/27, too (going for about $68 with taxes). Westland is also planning a peated single malt whiskey hopefully by the holidays. If you like single-malt whiskey, distilleries, or drinking in general, I strongly suggest visiting Westland (you can pick up Deacon Street there; it’s also at select bars like a href=”http://www.seattlemag.com/liberty” target=”_blank”Liberty /aand thea href=”http://www.seattlemag.com/rob-roy” target=”_blank” Rob Roy/a). It’s a great combination of rustic wood furnishings, copper stills, and friendly folks (and can be rented for events) who love talking about their product./p
pstrong2bar Spirits Bourbon Release:/strong While you’re down in SoDo, make a plan to visit Nathan ata href=”http://2barspirits.com/” target=”_blank” 2bar Spirits/a, just blocks away from Westland (2960 4th Avenue S). The 2Bar crew is incredibly passionate and friendly, and love talking about their spirits and the stories behind them. 2bar already has an award-winning vodka and a moonshine out in the market, and are releasing its first batch of bourbon on the 19supth/sup of October. The bourbon, like its other spirits, has a local history, using 95 percent Washington ingredients, with the other 5 percent coming from Oregon, and will be available in select restaurants and bars, as well as available in 375 ml bottles at the distillery (around $26). From the initial sips I’ve had, it’s going to have a layered flavor with a hint of sweetness–and make a smooth Manhattan./p
pstrongSeattle Distilling Company Idle Hours Whiskey Release:/strong Be sure to head out to Vashon on October 12, as celebrated spirits makera href=”http://www.seattledistillingcompany.com” target=”_blank” Seattle Distilling Company/a is releasing its newest product on that very day, as a part of the Vashon Cider festival, a big shindig that’s open to the public and will have tastings of island beer, wine, cider and spirits as well as great music. But the most important part (I think) is that the event stands as the release of the distilleries new Idle Hours whiskey. An Irish-style dram, it’s a single-malt whiskey, with a touch of honey added during fermention, which provides a smooth sweetness to the young-ish spirit (it’s aged 10 months in Cabernet Savignon oak barrels). Availability of the Idle Hours is limited at first, so get out to Vashon and pick up a bottle while you can (it runs $45 after taxes)./p
pstrongbroVo Bartender Amaros Round Two Release:/strong If you haven’t heard about the a href=”http://www.brovospirits.com” target=”_blank”broVo /aamaro program, and are a fan of the legendary family of Italian digestifs (or of interesting spirits and liqueurs or bartenders), then listen up, because it’s a darn cool. The distillery originally partnered up with six Seattle-based bartenders in 2013, allowing each to design a recipe for their very own amaro. Then, broVo worked with the bartenders to take the recipe to scale, then aged the amaros and released them (with each snazzy bottle having the bartender who made up the recipe pictured on the front with a quote). Now, broVo is about to release the second batch, with recipes from three Seattle bartenders, three San Franciso bartenders and three Chicago bartenders. They’ll be available ($52) in some liquor stores, but the best idea is to ask for them at bars like Local 360. And don’t forget the first round of amaros either–my favorite is #1 by John Ueding (it also won a Gold Medal at the Beverly Hills Spirits Competition)./p
pstronga href=”http://www.kisw.com/‎” target=”_blank”KISW /aand Mischief a href=”http://www.workersvodka.com” target=”_blank”Worker’s No. 9 Vodka /aRelease:/strong Just last week this new vodka was released at the a href=”https://www.facebook.com/pages/Mischief-Distillery” target=”_blank”Mischief /adistillery in Fremont (132 N Canal Street) as a combo effort between the radio station KISW (99.9 FM) and the distillery. Not only made from Washington-state grain and artesian water from Mt. Rainier, a portion of the profits is also going to support the Washington State Council of Fire Fighters (WSCFF) Benevolent Fund, so this is another great locally-focused product. The place to try the vodka, and show your support is at the distillery, though keep an eye out for it at local stores, too. I don’t have the price yet, but should that really be a question when you’re supporting local firefighters? I don’t think so./p
pstrongVessel Closes:/strong Not necessarily spirit- or distillery-specific news, but bar news. Unlike the above, it’s pretty sad news. Vessel reopened just over a year ago in its new space at Seventh and Olive after four award-winning years on 5th Avenue. It opened with a super interesting and ambitious cocktail plan with a wide variety of top bartenders from here and other spots coming in with special ever-changing nightly menus. All of which means that the bar’s closing is a crying shame. I just hope that owner/bar manager Jim Romdall isn’t out from behind a bar for too long, because he makes drinks that manage to be creative emand/em tasty, and he’s a swell fella, to boot./p