Family Meal of the Week: Joule 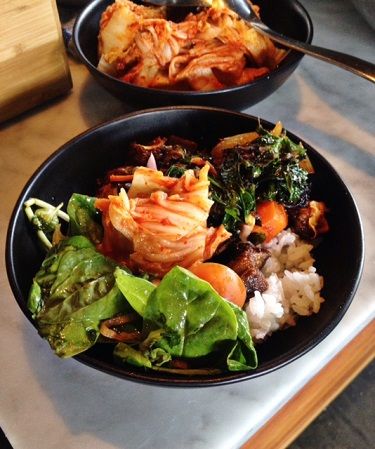 There are meals in almost every restaurant serving off-menu items that you would never be lucky enough to eat unless you worked in the restaurant. They’re called family meals and they’re served before or after service to feed those who work tirelessly to bring good food to your table — staff members who rarely get a chance to eat during their busy shift.

Joule restaurant is known for its incredible, bold flavors—a consistently perfect mix of acid, spice and heat. And their family meals are no different. A simple bowl of meat, rice and kimchi was as satisfying as just about anything I’ve enjoyed off their menu.

Sitting at the counter with proprietor and chef Rachel Yang, I scarfed my food down in about 5 minutes. So did she. Not because she lacks the proper chewing capacity like I do, but because she needed to prep for dinner. It’s also why she tries to simplify family meals.

“We usually try to do a one-pot dish,” she tells me. With everyone working, it’s hard to dedicate time to making an intricate staff meal. The sous chef will usually try to organize the meals, assigning who makes what.

All the short rib trimmings are slow-cooked with chilies, ginger, and sake soy. 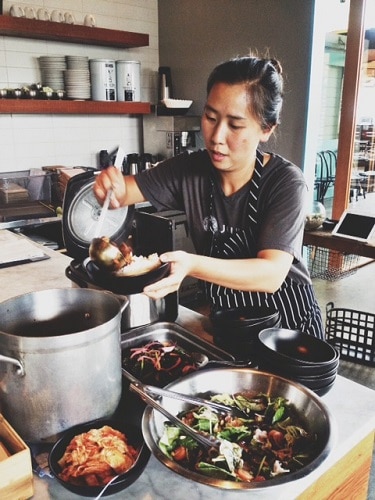 “The one thing we have a lot of here, because we’re a meat-heavy restaurant, is a lot of meat scraps!” says Yang.

The saucy result is spooned over a big bowl of rice.

“For us, we either go rice or tortilla.”

The vegetables used in the salads are samples from farms. “The best way to try samples out is to put it in a family meal and share it with everyone.”

The small staff (there’s less than 10), comprised of a few cooks, a bartender, host and server, usually sits down for their meal around 4 p.m. each day. Well, maybe not the cooks, according to Yang, who is out of her comfort zone sitting down and chatting with me while eating.

Today’s meal goes down quick. It’s Thursday and the staff is expecting a big dinner crowd.

“Earlier in the week, sometimes we sit down and eat,” Yang says. “But when it comes to weekends, it’s lucky if we can manage to get in a couple of spoonfuls before 5 p.m.”

Sustenance aside, family meal at Joule is a surprising source of inspiration.

“It’s a fun way to experiment with different things. We’ve never exactly copied a dish [for the menu], but the flavor…one day someone made a really amazing Indian curry and I was like, ‘That is really interesting flavor I hadn’t had in a while,’ and it inspired us to talk about whether or not it was something we wanted to have on the menu. So there’s definitely a lot of inspiration coming from family meal.”