Discover the autumn delight of the matsutake mushroom 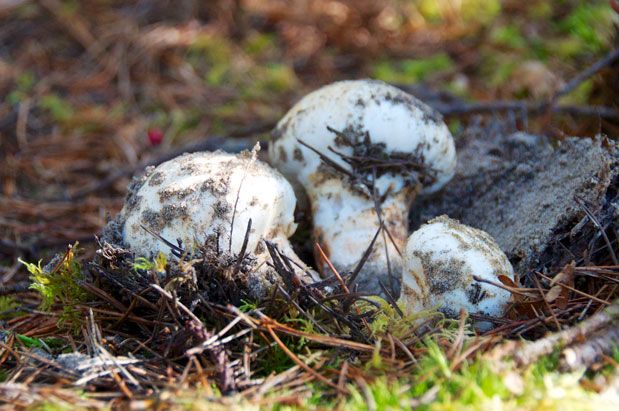 In the early 1990s, the Central Cascades of Oregon saw a feverish moment of fortune-seeking, reminiscent of the Klondike a century earlier. Hordes of itinerant prospectors descended on the small mountain community of Chemult, about an hour’s drive south of Bend, some of them coming from as far away as the East Coast, and pitched temporary, rough-hewn encampments in the surrounding national forest. They combed nearby hills for what some called “white gold”: an aromatic white mushroom that was being shipped halfway around the world.

This mushroom, the favorite fungus of Japan, is called matsutake, or “pine mushroom.” Noted for a complex flavor profile that combines earthiness with exotic spices—or, in the memorable phrase of Northern California–based mycologist David Arora, a “provocative compromise between ‘red hots’ and dirty socks”—matsutake mushrooms are beloved in East Asia, figuring in popular Japanese dishes such as sukiyaki, as well as Chinese soups and stir-fries. Savvy merchants discovered that the Cascade Mountains, with volcanic soils mimicking the sandy conditions preferred by matsutake, concealed the mother lode.

For a brief couple of years, the prices paid for matsutake rocketed into the stratosphere. Japanese customers shelled out wads of yen for pristine buttons nestled in decorative boxes of orange blossoms and ferns. Since then, prices have come back to earth, but even here on this side of the Pacific, you’ll still fork out as much as $60 per pound at Uwajimaya to enjoy this singular taste of fall, known in Japan as “autumn aroma.” Or you could find your own. There’s no need to travel down to Oregon. We have plenty right here in the woods of Washington, or the strictly urban forager can find traditional preparations, during the season, at Shiro’s in downtown Seattle.

Matsutake hunters are loath to reveal their secret patches. Besides, the quest is half the fun. Lace up your hiking boots and go for a fall hike in the mountains. Matsutake mushrooms like the same airy forests we do. The young, most desirable specimens will hide in the pine needle duff, forming subtle bumps on the forest floor known as “mushrumps,” so keen eyes are an asset. Once the matsutake is uncovered, be careful to pull gently so you don’t break the stem, a no-no for Japanese aficionados, who prefer a little dirt on the tip to preserve the mushroom’s life force in transit. If you’re not familiar with identifying traits—the scaly white cap; veiled gills; dense, tapered stem; and especially that telltale aroma of cinnamon and spice—it’s best to accompany someone who does, or join the Puget Sound Mycological Society (psms.org) and meet all kinds of matsutake fans. This is a mushroom that gives even mild-mannered foragers the fever, driving them into the woods each fall in search of a prized ingredient for the table.