Frances McCue Lives Inside Her Art

Behind the scenes of the local writer's art collection.

This article originally appeared in the March 2013 issue of Seattle Magazine. 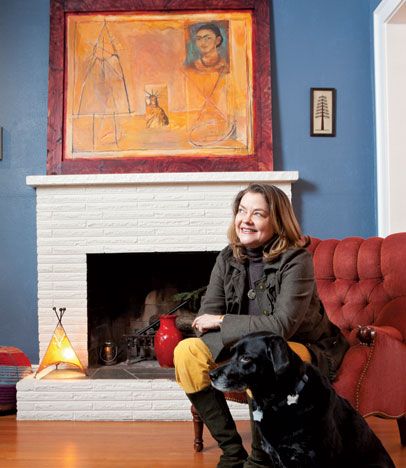 “I’ve never thought of myself as an art collector before,” Frances McCue says, with excitement. A poet, McCue considers herself more of the literary type, having served as founding director (1996–2006) of the Richard Hugo House writing center and currently teaching writing and literature to undergraduates as writer-in-residence at University of Washington. But step inside the cozy North Capitol Hill home she shares with her teenage daughter, Maddy, and it’s immediately clear: This aesthetically appealing abode could only belong to a true art lover.

“Paintings and drawings are like a series of portals.”
Several of the arresting works in McCue’s house are by a Moroccan painter, Mohammed Daoudi, whom she met when they were both working lousy jobs in a Seattle law office after grad school. His work vibrates with color, such as the first piece she bought from him in 1992, a wild swirl of yellow, red and blue surrounding two women. From the moment she saw it, McCue says, “I wanted to live inside it.” Glancing around at the rich blue walls, the Moroccan rug and pouf pillows, and the artwork, she says, “And now I am.”

“At some point I started substituting art for family photos.”
In addition to work by local artists such as Mary Ann Peters (an abstract in charcoal and oil), Dixie Peaslee (a petite rainy scene in oil) and Wes Wehr (an illustration of bugs in turtlenecks), McCue collects pieces by artists she has encountered on repeat trips to Morocco—journeys originally inspired by Daoudi—including small henna on animal hide paintings by Zini. Also in the dynamic mix: Maddy’s surprisingly mature portraits.

Art is a choice—but it doesn’t have to be an expensive one.
McCue can’t afford to spend much on art (between $5 and $800), but when she sees something she really wants (“It’s a switch that flips inside you”), she does the math to make it feasible. “I’d rather dress like a hobo [a complaint Maddy has lodged] and be able to buy art,” she says.

FIND IT: McCue prefers “finding things in the wild” to shopping at galleries. You can make the hunt easier by visiting some of her favorite artists online: mohammeddaoudi.com; dixiepeaslee.com; maryann-peters.com. Seek out Wes Wehr’s tiny, wonderful illustrations at Davidson Galleries in Pioneer Square.

Two local painters collect colorful art from around the globe.

This Seattle couple has an art collection built on personal history.