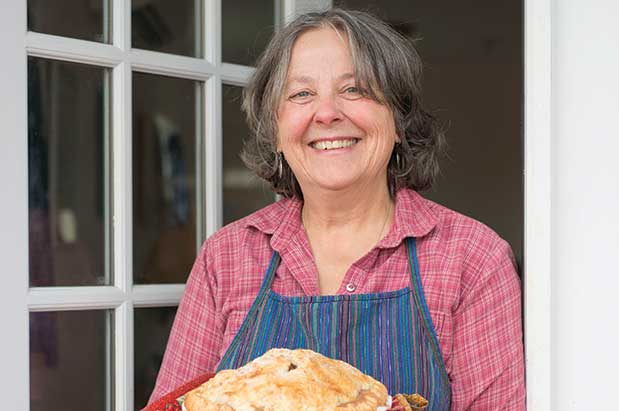 No nation has elevated sweet pie to the level of lore that America has—and never is our pie obsession as strong as during the holidays. Whether you’re emulating Aunt Angie’s apple or perfecting your own pumpkin, chances are, pie holds real value to you and yours. Which is why, if you’re setting out to make your own, it’s wise to call in the experts.

Pie maven Kate McDermott is a world-renowned pie maker and pie-making instructor based in Port Angeles (artofthepie.com). “I have a very primal urge to be working with flour,” says McDermott. “Pie is incredibly satisfying.” And teaching is even more gratifying for her—which is lucky for those of us not born with innate pie-making genius.

Her classes, taught to many who swear her sessions double as emotional therapy, teach people that the guidelines for good pie aren’t that different from the laws of living well. “First, remember that pie doesn’t have to be perfect,” McDermott says. After that, she lays out three basic pie rules. First, keep all the ingredients you use for your pie chilled—especially yourself. (Getting worked up about your crust isn’t going to make it flaky.) Second, mind your boundaries; dough that runs over the edge of your pie pan may burn underneath. Third, don’t forget to vent pies with top crusts, so their interiors don’t run overboard.

It’s no accident that chilling out, watching your boundaries and venting are also skills some of us have to work on every day. “I feel like my pies are always telling me what I need to work on most in the rest of my life, which changes from week to week,” says McDermott. “Being at the baking counter is one of my churches, and I need to attend, so to speak, to stay healthy.”
In that case, take us to church.

Art of the Pie Dough
Recipe by Kate McDermott, Art of the Pie
For information on where to find leaf lard, see artofthepie.com.

This is the dough that I have successfully taught to thousands. I continue to use it on an almost daily basis for pies that I make and share with friends and family.

1/2 cup ice water (this is an average, but sometimes the dough takes more)

1. Put all ingredients but the ice water in a large bowl.

2. With clean hands, quickly blend the mixture together until it looks like cracker crumbs with some lumps in it the size of peas and almonds. The lumps make flaky pies.

3. Sprinkle ice water over mixture and stir lightly with a fork.

4. Squeeze a handful of dough together. Mix in a bit more water if it doesnʼt keep together.

5. Divide the dough in half and make two chubby disks about 5 inches across.

6. Wrap the disks separately in plastic wrap and chill for about an hour.

1. Take out one disk and put it on a well-floured board, pastry cloth, parchment paper or plastic wrap.

2. Sprinkle some flour onto the top of the disk. Thump the disk with your rolling pin several times.

3. Turn it over and thump the other side.

4. Sprinkle more flour onto the top of the dough, if needed to keep the pin from sticking, and roll the crust out from the center in all directions.

5. When it is an inch or so larger than your pie pan, brush off the extra flour on both sides.

6. Fold the dough over the top of the rolling pin and lay it in the pie pan carefully.

8. Put the filling in the pie and repeat the process with the other disk.

This recipe will make one double-crust pie or two single-crust pies for 9-inch pie pans. Leaf lard is available at some butcher shops, farmers’ markets and also by mail order. Be sure to get already-rendered leaf lard. It will take about 5–7 minutes to put the dough together. Minimum chill time is 20 minutes on the lowest and coldest shelf in your fridge. One to 2 hours of chill time is great, too. After chilling, dough disks may be frozen for up to 1 month.

There’s nothing worse than a pie that’s only browned on one side. Which is why about once a year, Kate McDermott performs the toast test: With the oven set to her pie-baking temperature, she covers one entire rack of her oven with plain white bread and slides the rack into the center position in the oven. After 25 minutes, she takes it out—and gets a detailed education in where her oven has hot spots and whether it bakes evenly, so she can rotate future pies accordingly.