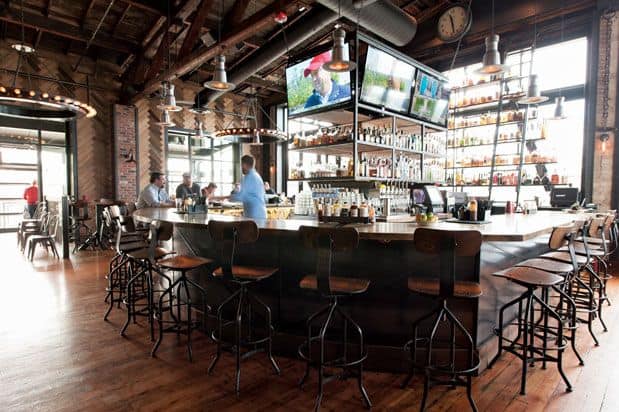 This article originally appeared in the December 2012 issue of Seattle Magazine.

Yes, Ballard has come to this: a barbecue joint with $8 valet parking. Kickin’ Boot Whiskey Kitchen isn’t really a joint, though. It’s an enormous, polished, ironwork-brick-and-beams concept in the growing restaurant empire of Nathan Opper and Zak Melang (seven Matador restaurants in three states, plus a Portland sibling to the Whiskey Kitchen). Luckily, the Kitchen works. It’s not only better than it has to be for a beautiful spot with a well-stocked bar on a happening corner, it’s almost—dare I say—kick-butt good.

The remodeled 1920s building is gorgeous, with high ceilings, reclaimed dark woods and giant, ring-shaped chandeliers. Meats are prepared in J&R smokers brought in from Texas, and the kitchen lets their flavors stand, instead of drowning them in sauces. Baby back ribs are tops ($17/$24). Chili made with hefty chunks of brisket ($8) is worth the price of parking. Main platters come with a choice of sides; try the cakey cornbread. Fried chicken arrives hot and crisp, but lacks seasoning. Pass on the unremarkable desserts, and instead spend that considerable caloric load on the lush, stick o’ butter mashed potatoes, or the whiskey-spiked soft butter siding the biscuits. Taken individually, that doesn’t sound like a rave, but the whole hefty experience was greater than its corporate parts.