These locally-made liqueurs put your palate in touch with nature.

This article originally appeared in the March 2012 issue of Seattle Magazine. 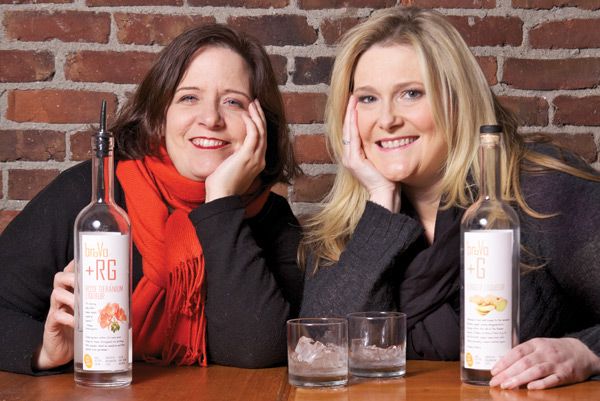 With backgrounds in marketing and sales, Mhairi Voelsgen and Erin Brophy may not be your typical team of craft distillers, but then, their self-described “lady-made liquor” is not your usual Jack-and-Coke happy-hour drink.

When Voelsgen and Brophy decided to create their own liquor brand, they aimed at setting themselves apart from other craft distilleries by steering away from the typical vodka, gin and whiskey of their competitors. Instead, the pair created BroVo Spirits (brovospirits.com) late last year with a focus on unique liqueurs made with ingredients local to Washington, such as Douglas fir foraged from the Glacier area (in the North Cascades) or lavender grown in Ferndale.

Lower in alcohol than most other liquors, liqueurs are spirits flavored with fruit, herbs, nuts, flowers or spices and bottled with added sugar. BroVo’s varieties use the least amount of sugar possible to still classify as a liqueur, so they’re light enough to be served solo on the rocks as well as in creative cocktails. Flavors include lemon balm, rose geranium, ginger, Douglas fir and lavender. Along with their original five options, new seasonal flavors of mint and rhubarb will debut in April; all can be purchased in select liquor stores (around $40 for a 750-ml bottle) and in restaurants around the city, including Ray’s Boathouse in Ballard, El Gaucho downtown and any of Tom Douglas’ restaurants.