It's National Lighthouse Day. Here's a roundup of a few of the gorgeous lighthouses in our state 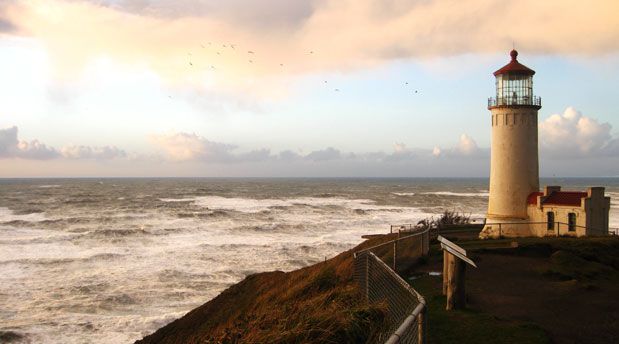 Lighthouses, though primarily used for navigating rough waters by maritime boatfarers, have always struck me as the stuff that great lore and legends are made of. (Think of tales about the ghost of the dutiful lighthouse keeper or one of shipwrecks and marauders.) If a story needs a hauntingly beautiful scene or two, put a lighthouse in it. That’s just what director, John Carpenter did for his famous 1980 horror film, The Fog, which was partially filmed in Point Reyes, Calif., the home of Point Reyes Lighthouse.

The Pacific Northwest has its own share of these stirring beauties with a little story behind each one. In honor of National Lighthouse day, we’ve rounded up some of our favorites.

Cape Disappointment Lighthouse is located in Cape Disappointment State Park (named as such by fur trader John Meares who did not discover the river he was in search of in the area). It served as the primary beacon for ship navigation in its treacherous location — the confluence of the Columbia River and the Pacific Ocean, also known as “The Graveyard of the Pacific.” It is said that one of the earliest keepers of the lighthouse, Joel Munson, held square dances in Astoria where he played the fiddle to raise money for a life-saving boat.

Despite this lighthouse dutifully shining its flame, a large number of shipwrecks continued to occur and it was determined that a second lighthouse would be needed in the area. The one you see in the photo above is that second lighthouse — the beautiful North Head Lighthouse. Both lighthouses are within 10 minutes away from each other. 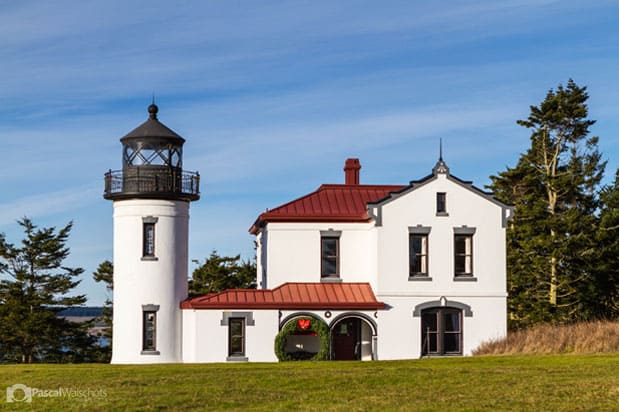 Admirality Head Lighthouse was the first on the Puget Sound and thus, shone full time to lead sailors to safe harbor. The original beacon was built in 1860, but was moved and reconstructed to make way for the building of Fort Casey behind it in an effort by the U.S. Army to protect the entrance to the Puget Sound. Though the actual lighthouse didn’t seem to make it on camera, the area right around it on Whidbey Island is one of the locations where the 1998 movie Practical Magic was filmed. 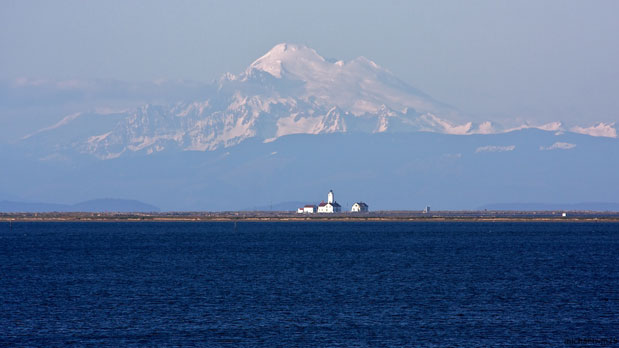 A gorgeous shot of Mount Baker serving as a backdrop for the New Dungeness Lighthouse
Photo credit: flickrphoto/Michael W Murphy

The New Dungeness Lighthouse is located at the tip of the Dungeness Spit near Sequim, Wash. It was lit for the first time in 1857 and used a fog bell to signal ships. The fog bell was later replaced with a steam fog signal since it was difficult to hear it in inclement weather conditions. A keeper’s dwelling was also added to house the head lighthouse keeper’s family. Today, the New Dungeness Lighthouse is one of the few that allow families to be lighthouse keepers for a week with its Keeper Program — complete with keeper duties and everything. 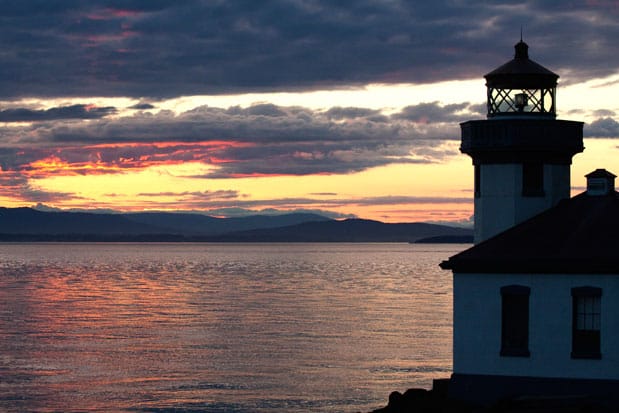 The alluring archipelago that consists of more than 170 islands and is only a ferry ride away from Seattle is home to five lighthouses, two of which are actually on San Juan Island itself: Lime Kiln Lighthouse and Cattle Point. Lime Kiln is one of the few lighthouses that serves an important purpose today. Located in an area highly populated by orcas, it serves as a research facility to study these magnificent creatures. Inside the lighthouse, there is a hydrophone that picks up radio waves of whale “songs,” or whales’ form of communication. 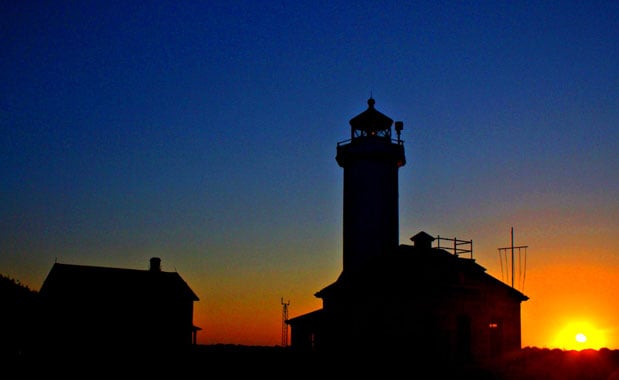 Point Wilson Lighthouse, located in Port Townsend, Wash., stands at a height of 51 feet making it the tallest lighthouse overlooking the Puget Sound. The lighthouse sits in Fort Worden State Park which also happens to be one of the filming locations for the 1982 flick An Officer and a Gentleman (starring a very young Richard Gere who got his professional start in Seattle, by the way).

Lighthouses are treasured symbols of our coastal heritage. To help preserve these landmarks, you can buy a lighthouse license plate and keep Washington shining.