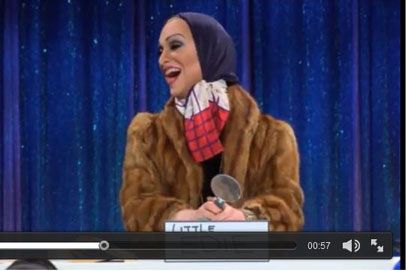 Local actor and drag performer Jerick Hoffer, a.k.a. Jinkx Monsoon, took the cake on RuPaul’s Drag Race this week with a delightful impression of Little Edie, one half of the eccentric duo introduced to the world in the documentary Grey Gardens (see the stage version in Seattle this spring).

Jinkx’s costars on the show couldn’t quite keep up with the apparently highbrow reference. I love the bewildered look on the Ke$ha’s impersonator’s face when “Little Edie” asks who “Ketchup” is.

Hoffer is a talented actor (he recently starred in BalaganTheater’s production of Hedwig and the Angry Inch); it’s fun to see him showing off those chops on a national stage. Watch the clip from the show, posted on Gawker.