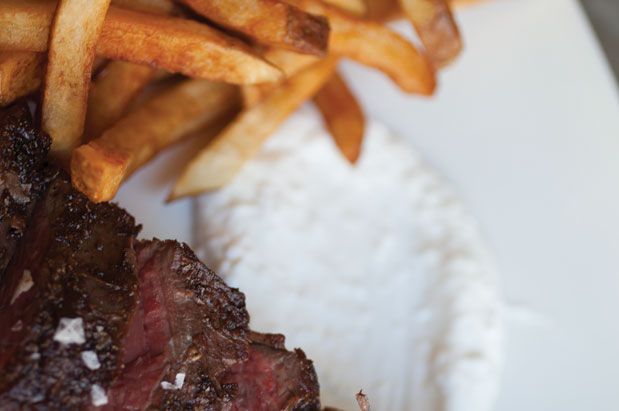 It looks like the revolving door of restaurants at this Madrona address may be standing still awhile. Before Ethan Stowell scooped up the cute space across the street from Bottlehouse back in February, it was home to a rotation of eateries that began with Cremant, followed by June and Restaurant Bea. Now, Stowell has brought the space full circle, taking a cue from the French bistro that started it all.

At first glance, the space may not seem all that different, but Stowell and his crew did a lot of reworking, most noticeably, changing out the archway separating the bar and kitchen—it’s twice as big now, allowing diners to see their food being prepared. The resulting look is cleaner, more streamlined, but also a little more austere.

Steak, six different cuts ranging from a $22 hanger steak to an $80 bone-in rib-eye for (at least) two with four different sauces to chose from, are the main attraction here, but they don’t overshadow the rest of the menu in any way. The charcuterie was a standout on several visits. Chef Thom Koschwanez, who was previously in Washington, D.C., working at Central Michel Richard before becoming a roving sous-chef for Stowell’s company, is the guy who gets credit for the wonderful, well-seasoned selection ($8 each, 3/$18, 5/$25). There are only a few, and they’re all good, but I would never begin a meal here without the pâté de campagne, a rustic, coarsely textured terrine that pairs perfectly with the house-made mustards and toast (often oiled with a heavy hand) that accompany the meat platters.

The other thing that should be required ordering on this meat-heavy menu is the frisée and bacon salad with a poached duck egg—a classic salad Lyonnaise ($12)—on the menu at Stowell’s insistence, along with the Little Gem lettuce salad ($10), with green beans and champagne dressing. Both dishes pair nicely with any of the steaks; the most popular and least expensive of which is the hanger. But my money is on the rib-eye. It’s just a really great, tender, well-salted and well-cooked piece of meat made even more memorable with a side of horseradish cream.

The house-made fries, which don’t automatically accompany the steaks, are truly tasty and, according to Stowell, not to be taken for granted. “There’s a reason Thomas Keller buys frozen fries [for famed Bouchon in Napa Valley]. Consistency [at a large level] is a really hard thing to achieve with homemade French fries.” What this new venture will mean to Madrona, though, is more than just dinner. It’s a neighborhood respite. Stowell says Red Cow regularly sees people who come in twice a week for the burger, and others who come in twice a week just to hang out at the bar. It’s a niche that hasn’t been filled consistently in this changeable location. But it’s too soon to know if Stowell will be the one to fill it permanently. “Check in with me in 10 years.” Dinner daily. Madrona, 1423 34th Ave.; 206.454.7932; ethanstowellrestaurants.com