Thanks to musical pacing issues and stylized staging, 'Charlie Parker’s Yardbird' is a brief opera but not a fast-moving one 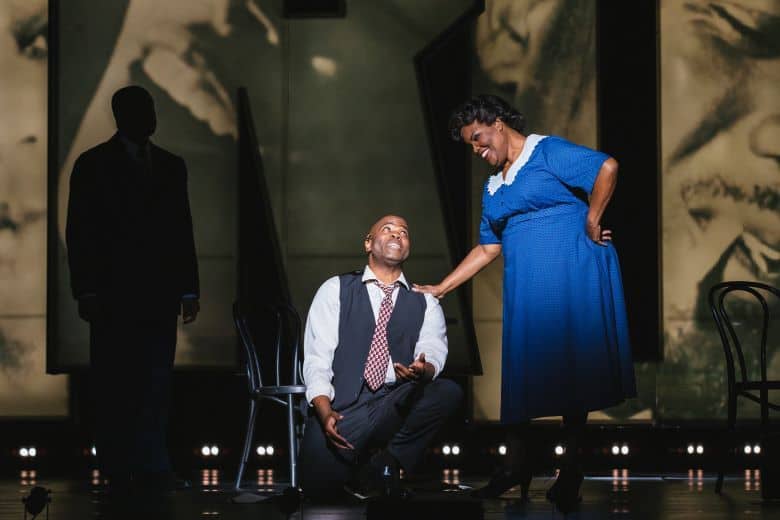 Bridgette A. Wimberly’s libretto for Charlie Parker’s Yardbird, which opened Saturday night at Seattle Opera (premiered in Philadelphia in 2015), casts the troubled jazz pioneer’s life as a suite of 21 continuously flowing scenes, in 90 minutes with no intermission. Wimberly sets up Parker’s 1955 death as a framing device and his career and personal struggles as flashbacks, adding as supporting characters Parker’s mother, Addie; three of his wives; his patroness, Nica; and his mentor Dizzy Gillespie. Most of these reminiscences are staged—regardless of where the events took place—on a single set representing Birdland, the New York jazz club named for Parker; this theatrical device tends to be static, as Parker (sung opening night by Joshua Stewart) remains almost always onstage among the tables and chairs and the others enter and exit to interact with him. Just in the nick of time, the opera opens up, when Parker’s nervous breakdown sends him to a California mental hospital.

On its own, Daniel Schnyder’s score is beguiling, never for one bar failing to grab the ear. Leaning extensively but not exclusively on jazz, from Gershwin to Parker-style bebop itself, plus hints of the then-contemporary composers Parker is known to have admired (Berg, Stravinsky), his music is expert, colorful, and imaginative, making the orchestra a bubbling fountain of ideas. An opera’s score, however, has other responsibilities—not just to decorate the story, but to support and drive it. Though rhythmically engaging and goaded by more snappy percussion than you usually hear in an opera pit, few moments, and practically none of the vocal writing, provide any sense of visceral propulsion—one aspect Schnyder’s music decidedly does not have in common with his subject’s music. In other words, Charlie Parker’s Yardbird is a brief opera but not a fast-moving one.

Both these non-naturalistic devices (the one-set staging and vocal lines that unfold considerably more slowly than actual speech) can work wonders in certain contexts, but used together they can really dial down a story’s dramatic power. Here’s one instance. In scene 5, Parker’s first wife Rebecca and his mother Addie commiserate on the difficulties of raising a black son. “Ain’t easy to be a mother and a wife…” they sing, and this is the sort of reflective moment that can take musical, and consequently emotional, expansion, existing in its own time frame outside that of the opera’s narrative. Opera composers have taken rich advantage of this convention for 400 years. But not all moments can survive this approach. The musical setting of person-to-person dialogue, especially in scenes of heightened conflict, requires some nod toward realism. Before Rebecca’s duet with Addie, upon her entrance, she confronts Parker about his neglect of their child, singing “Why did you leave me and your son here all alone?” As written, the singer playing Rebecca is asked to spread this line over, as I recall, about seven or eight seconds of music. Try it yourself and see what kind of urgency you can put into the line at that tempo.

There’s a lot of this in Charlie Parker’s Yardbird. The emotional immediacy of Parker’s interactions with the other characters is hampered throughout; scenes that should move and crackle and grab us, fall short. The defense that this whole opera is a kind of dream sequence only goes so far—and yes, it is possible to sing words onstage at a pace approximating naturalistic speech (see: every musical ever written). As a result, the most effective scenes are soliloquies: Parker tells us of his struggle getting the music he hears in his head on paper; Addie (Angela Brown, who earned the evening’s warmest applause) hears Charlie on the radio and rejoices; Parker wraps up the opera reflecting on his artistic legacy with quotes from Paul Lawrence Dunbar’s poem “Sympathy”: “I know why the caged bird sings!” But it’s indicative of the opera’s difficulty in bringing theatrical punch to the events of Parker’s life that the most gripping scene of all is a dance, performed by Mikhail Calliste and choreographed by Donald Byrd, representing Parker’s stay in the asylum.

Ruinous Media captures the Seattle experience, and then some

Podcasts are full of murder, mystery, mayhem and sports. Seattle’s Ruinous Media is focusing on another genre, music, with a veritable cast of well-known Seattle characters who tell stories in an engaging and compelling way. Along the way, Ruinous has exported Seattle’s unique brand of “weird” to audiences across the United States and around the…

Kevin Sur slunk to town looking for a rock to slip under, but instead found his place in the sun.  In 2003, he was a down-on-his-luck guitarist and songwriter who had invested seven years building up the punk band Luckie Strike, so named as a bowling reference.  Bonded by social rejection and the compulsion to…

Stories from Seattle: “Venues in Seattle are Going to Close”

Steven Severin, co-owner of Neumos, is fighting to keep the music alive