Hang out, drink beer, eat and play games at Altstadt 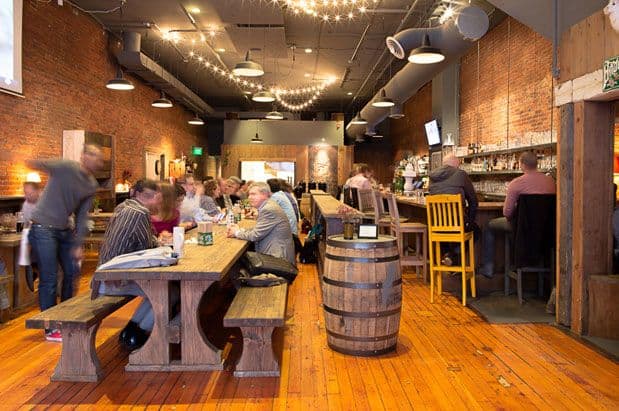 !–paging_filter–pLast August when Brendan McGill, chef/owner of Hitchcock on Bainbridge Island, announced that he was opening a German beer hall in Pioneer Square with partners Lex Petras and Ward Van Allen, he explained that he was going to call it Altstadt (209 First Ave. S; 206.602.6442; a href=”http://www.altstadtseattle.com” target=”_blank”altstadtseattle.com/a), German for “old town,” because to him, Pioneer Square is old-town Seattle. Today, Altstadt is a bridge between seasoned neighborhood bars and the “new” Pioneer Square (a href=”http://www.seattlemag.com/article/restaurant-review-bar-sajor“Bar Sajor/a, a href=”http://www.seattlemag.com/article/cheap-eats-il-corvo“Il Corvo /aand a href=”http://www.seattlemag.com/article/shop-and-sip-pioneer-squares-e-smith-m…“E. Smith Mercantile/a). Similarly, the menu, executed by chef de cuisine James Pech (from a href=”http://www.seattlemag.com/article/hitchcock-best-new-restaurant-2011“Hitchcock/a), is a link between what many expect traditional German food to be (heavy) and what Pech and his crew are creating. Everything has flavor without being weighed down by fat, something most noticeable in the sausages. Pech has adopted the supertraditional preparation of creating a rougher grind than the emulsified version ubiquitous in Germany. The result: a leaner link that still bursts with meaty essence. Four kinds are served as part of a lumberjack-sized meal that includes tangy, house-fermented sauerkraut, house-made mustard, fries (some of the best in Seattle) and traditional rye bread piled high on a platter. It’s a bargain at $12 and absolutely what you should order here. For something lighter, get the black kale salad ($7) with Belgian endive and pumpernickel croutons, which are most flavorful after a few minutes of settling into the creamy garlic dressing. The soft pretzel with sea salt and hot mustard ($6) is a nice snack on its own and perfect with one of the 14 (mostly) German brews on tap. A large open space with communal tables, fireplace and a narrow bar nearly the length of the dining room, Altstadt encourages you to hang out, play games, drink beer and eat. “People want to know if we’re one of those ‘fancy’ places that’s coming into the square or if we’re a bar,” says McGill, “and we really are both.”nbsp;/p