2012 serves up an emerging all-star team of top chefs and other palate pleasers. 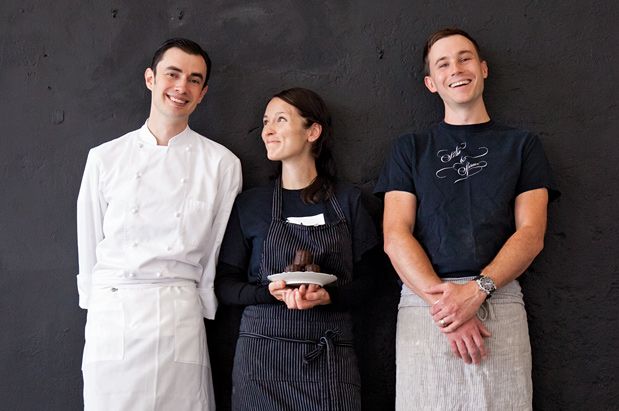 Seattle is home to such an array of delicious food that choosing a place to eat can be more than a little overwhelming. It’s about to become even harder to make a dining decision as we introduce a handful of new talent into our Northwest culinary club. This year’s lineup has a little bit of everything: pop-up rock stars, farmers market royalty and libation masterminds all poised to become the next big names in Seattle cuisine.

Baruch Ellsworth (shown above, left)
Pastry chef, Canlis
When celebrated pastry chef Neil Robertson left his post at Canlis last year, the foodie world was abuzz with rumors of who would step in. Enter Baruch Ellsworth, a 32-year-old San Francisco transplant whose culinary résumé, boasting kitchen time at The Dining Room at the Ritz-Carlton and Benu, had Seattleites swooning. Since starting last year, Ellsworth, a nominee for Food and Wine magazine’s Best Pastry Chef award, has introduced a new tasting menu and updated a handful of main plates while still offering up those quintessential Canlis desserts, such as the fruit-clad crème brûlée ($12) and the Grand Marnier soufflé ($14). With many of his pastry predecessors branching out on their own (see below) and a stellar support system at home (his wife is Sitka & Spruce pastry chef Sarah Ellsworth), we’re excited to see what Ellsworth has in store for us.

Michael Sanders and Sarah Ellsworth (shown above, from center)
Baker and pastry chef, Sitka & Spruce
When Matt Dillon announced plans for a bakery earlier this year, we knew Sitka & Spruce dream team Michael Sanders and Sarah Ellsworth were to thank for the inspiration. Sanders, who fell headfirst into baking after leaving his post as sous chef at Spinasse, does most of his work at The Corson Building, where he crafts the small batches of natural leavening sourdough that has fans singing his praises. Ellsworth, formerly of San Francisco’s Boulettes Larder, is the woman behind Bar Ferd’nand’s pastries, such as the wildly popular yeasted croissants ($4.50). She’s also married to Canlis pastry chef Baruch Ellsworth. We can only imagine, with such tasty hobbies and so many dedicated followers, the bakery nirvana that will emerge when Sanders and Ellsworth combine forces. Joe Herrin (left) and Mike Mora
Founders, Heliotrope Architects
Mike Mora and Joe Herrin may not be chefs, but their work will change the way you eat. Since founding Heliotrope Architects in 2000, Mora and Herrin have become go-to designers, noted for their use of modern, light and local materials. After transforming West Seattle’s Spring Hill (now Ma’ono Fried Chicken and Whiskey) into a sleek, glass-, maple- and steel-accented space in 2008, the pair was hooked on restaurant design. The recently opened Fremont Collective building boasts two recent Heliotrope projects: the newly minted Joule space, rich with popping color and custom art pieces, and Renee Erickson’s The Whale Wins, complete with cool, white-washed walls and a wood-fired oven. Heliotrope’s recent bragging right is its work on Meeru Dhalwala’s long-awaited SLU incarnation, Shanik (of Vancouver’s Vij’s fame), a project led by Herrin, who, in a personal e-mail to Dhalwala, urged her to consider moving southward to bless Seattleites with her heavenly Indian cuisine. Jeremy Ravetz
Executive chef and general manager, Quinn’s Pub
When former Michael Mina chef de cuisine Jeremy Ravetz left San Francisco in 2011 and headed to Seattle to claim a spot in the kitchen at Quinn’s, he went from caviar to burgers and never looked back. In the past year, Ravetz has infused the existing pub-fare menu with gourmet techniques, resulting in rustic dishes that toe the fine line between pretension and comfort food, such as Quinn’s famous Scotch egg ($8). Since adding general manager to his list of titles last May, Ravetz has been instrumental in a bevy of new projects, including the pub’s flagship brew, Quinn’s Tap, introduced last summer and a charcuterie operation planned for early next year. PK (right) and Wiley Frank
Owners, Little Uncle
Inspired by a year spent living in Thailand, former Lark sous chef Wiley Frank, 34, and wife Poncharee Kounpungchart (aka “PK,” 38) decided to introduce Seattle to their favorite Thai dishes. Armed with culinary secrets collected from PK’s family and how-to’s gleaned from Thai chefs, the Franks started wowing diners with melt-in-your-mouth beef-cheek-stuffed buns ($3.30) and flavor-packed curry egg noodle dishes, first under the name Shophouse and now Little Uncle. After building up a cult following through weekly pop-up dinners, and a stint at the Columbia City famers market, Little Uncle has settled in a humble yet functional walk-up window on Madison between Pike and Pine, allowing fans to satisfy their pad thai cravings every week, Tuesday–Saturday. Zach Agustin
Bar manager at Rob Roy
After being a Rob Roy bar-back (the person who restocks ice and does loads of non-cocktail-making work behind the bar) for a bit, Zach Agustin jumped at the chance to move to bartending. He’d done some less creative drink slinging at Via Tribunali, but hadn’t realized how bartending could be an artistic career until watching well-crafted drinks being made daily. Since making the move, he’s developed a welcoming, guest-first philosophy that involves “taking care of you when you don’t want to take care of yourself.” He’s also devoted to a drink-making education that goes beyond the menu, leading to a cocktail style steeped in classics (and lots of historical drink books behind the bar). As former Rob Roy manager Bryn Lumsden says, “He doesn’t just memorize recipes and factoids, but consumes any and all info on a subject. His drinks and bar chatter benefit from that, big time.” Great drinks and a great barside manner make Agustin a bartender to watch. Kevin Burzell and Alysson Wilson
Owners, Kedai Makan
Upon returning to Seattle after a chance meeting in the Bavarian Alps, a few years in Europe, and a trip through Asia, foodie couple Kevin Burzell, 35, and Alysson Wilson, 32, were ready to share their culinary findings with the Northwest. After logging time in the kitchens of a handful of Seattle eateries, including Poppy, Cascadia and Ba Bar, the duo realized that Seattle was in dire need of Malaysian food and returned to Southeast Asia in 2010 to research the local cuisine, arriving stateside with a plan for a small restaurant. In its current manifestation as a stand at the Broadway, Columbia City and Virginia Mason farmers markets, Kedai Makan offers a weekly rotating menu featuring sweet rices, hand-cut noodles and homemade curry pastes, which had converts vying for a place in line during their debut this past April. With a handful of pop-up dinners under their belt and aspirations for a brick-and-mortar restaurant, this power couple is sure to be around long after the market season ends.

Ian Roberts
Co-owner, The Pine Box
Former bar manager at Brouwer’s Cafe and cofounder of Seattle Beer Week, Ian Roberts joined forces with fellow brew buffs Dean Hudgins and Mark Eskridge this past March to open The Pine Box (1600 Melrose Ave.; 206.588.0375; pineboxbar.com) in the old Chapel nightclub space. The bar boasts 33 taps of predominantly West Coast craft brews along with a selection of imports, one tap of which is filtered through The Pine Box’s handmade Randall, a contraption that is packed with hops (or, for more adventurous drinkers, bacon or jalapeños), resulting in a flavor-infused pint. Keep your eye on Roberts and company; ideas for a pub with a small brewing system are in the dreaming stage.