Facing Homelessness, a local nonprofit behind the BLOCK Project, finds a new avenue for its advocacy 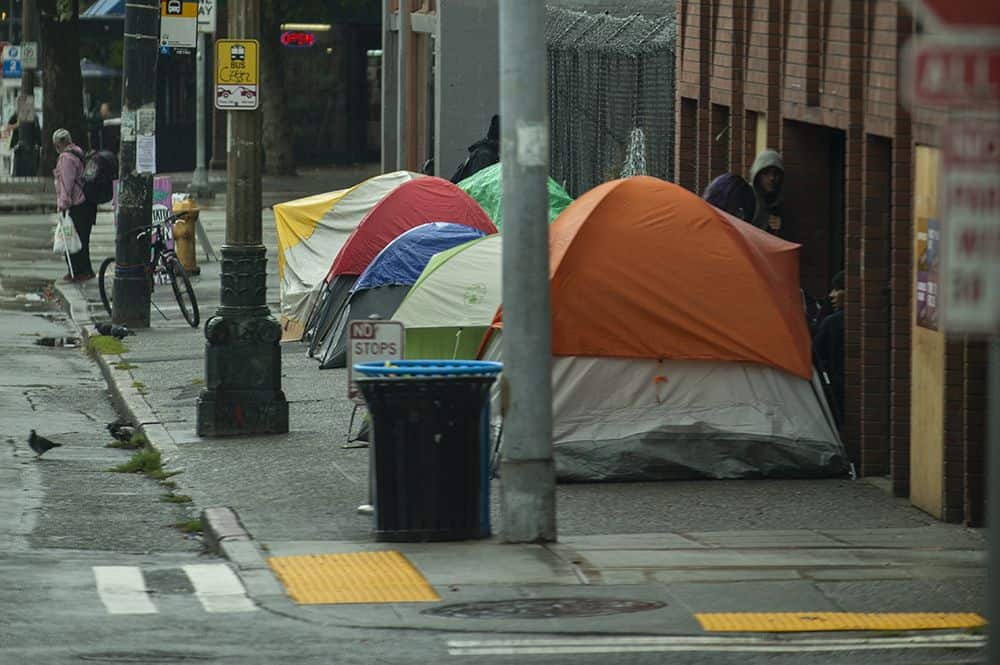 I’m standing next to a freeway overpass, chatting with a couple dozen strangers about what brought us here this Sunday morning. As we mill about, Rex Hohlbein, the head of the nonprofit group Facing Homelessness, beams and hugs each new arrival. A pile of garbage bags, a dozen hardware-store grabbers, two boxes of latex gloves, and several red sharps containers are piled up near the gate separating the overpass from a homeless encampment on a hillside overlooking I-5 and downtown Seattle. These will be our tools for picking up trash at this hillside homeless encampment as part of a new cleanup effort spearheaded by Hohlbein.

Facing Homelessness—which started as a Facebook page aimed at humanizing Seattle’s thousands of homeless residents by telling some of their stories, and expanded to include the BLOCK Project, which builds housing for formerly homeless people in homeowners’ backyards—has found a new avenue for its advocacy: cleaning up encampments that are at risk of removal by the city’s Navigation Team.

A bit of backstory: The Navigation Team is a group of police officers and outreach workers who remove unauthorized encampments and inform their residents about available shelter and services. Over the past several months, they have begun focusing primarily on removing encampments that constitute “obstructions,” as defined by city rules establishing when encampments can be cleared without the usual 72 hours’ notice. Mayor Jenny Durkan’s administration has interpreted the term “obstruction” broadly, to include virtually any encampment that is in a public park, on a sidewalk, or where a large amount of trash has accumulated. Once an encampment is deemed an obstruction, the Navigation Team can remove it without notifying its residents or offering them shelter or services.

The cleanups, which started in early June, now draw dozens of volunteers eager to help solve a vexing problem. Because the city only collects trash from 10 encampments at a time (a program that could expand to two more encampments this year), garbage—clothes, needles, food waste, and the detritus of everyday life—tends to pile up. (Illegal dumping in these areas by people who don’t live there exacerbates the problem.) Eventually, the Navigation Team will either come in and pick up some of the garbage or remove the encampment entirely and clear the trash away. Removing the trash, Hohlbein hopes, will help forestall this process by removing one of the city’s justifications for “sweeps.”

Before volunteers can start piling the trash that litters the bottom of this hillside into big black plastic bags, Hohlbein reviews some principles with the volunteers. First principle: Have respect. “We have to remember that we’re entering people’s home right now, and it may not feel like that because it’s outside, but we have to be respectful of people’s privacy and not leave the path below the encampment,” Hohlbein tells his volunteers. Second principle: Safety. Hohlbein shows the volunteers how to pick up needles—with a grabber, held at a safe distance—and dispose of them in the sharps containers provided by the People’s Harm Reduction Alliance. Third: Community. “We’re here to have fun. That is really important. We want you to come back and tell your friends and family about this.” And finally, “and least important”, he says: Pick up garbage. “If people come down [the hillside] to engage with you, that’s your opportunity to engage with another person, and that’s way more important than picking up garbage.”

Over the course of the morning, between marking needles on the ground with flags for the designated needle pickers and sorting through stuff to decide what’s trash and what might be useful—a dirty roll of paper towels goes in the bag, some barely damaged books are gathered and left on the ground—I talk to some of the volunteers to find out why they are here. One young woman, who works for the youth homelessness nonprofit YouthCare, tells me she was from Aberdeen, where youth homelessness is a major issue, and sees the cleanups as an opportunity to extend her service work. Another volunteer, whose organization builds tiny houses for people experiencing homelessness, says he is frustrated that the city hasn’t created more tiny house villages and showed up to support Hohlbein in his effort to prevent more encampment removals.

The trash pickups end at 12:30 sharp—enough time, on this day, to collect dozens of bags of trash and remove hundreds of needles from the hillside. After the volunteers pile up the trash outside the gate, the city’s Navigation Team, which was just leaving the camp when we arrived, will come back with a truck to gather the bags.

Hohlbein checks on some encampment residents he’s gotten to know, just to see how they’re doing. He snaps photos of several of the people living in the camp, which he will post on the Facing Homelessness website along with a request on the Facing Homelessness page for donations to buy tents, sleeping bags and tarps. On the way back down the hillside, he stops and poses a rhetorical question. “If [the city has], like, a five-prong plan for homelessness, why wouldn’t one of them be to clean up the garbage?” He says he hopes to expand the project to have weekly cleanups across the city. Yes, the project is “about cleaning up the city,” he says. “But really, we want to stop the sweeps.”