Our Favorite Dining Trends in 2012 Barbecue Done Right
Barbecue has long been branded as a summer food, but we think it tastes just as good on a chilly November evening, with sauce coating your fingers and steam rising from your plate to envelop you in a savory glow. This year, the Southern staple found a home in Seattle, with a quartet of restaurants opening in Ballard. In the old Zippy’s Giant Burgers place across from Ballard High School, RoRo BBQ & Grill (6416 15th Ave. NW; 206.783.3350; rorobbq.webs.com) serves up a variety of sandwiches, ranging from a smoked beef brisket ($11.99) to a hot links ($10.99) item, while a side ($1.99–$2.99) of good, old-fashioned potato salad ensures that no one leaves hungry. If it’s sauce you’re after, The Boar’s Nest has got you covered with seven distinct options. Try the spicy mustard-infused South Carolina or the bourbon-heavy Kentucky sauce on slow-cooked pork (or Field Roast for the meatless crowd). Mesquite-grilled steaks and house-smoked meats have made Kickin’ Boot Whiskey Kitchen an instant crowd-pleaser since it joined the grilling ranks this past summer. Our vote for best barbecue goes to Bitterroot, where dry-rubbed, slow-smoked meats nestle in soft Tall Grass Bakery pretzel buns dripping with sauce, and a killer whiskey list offers the perfect finish to any meal.

Fish Collar
In recent years, whole-beast cookery has returned to fashion; offal (sweetbreads, brains, tongue) and offbeat cuts have gained popularity. But many chefs have been slow to extend the idea to eating the whole fish. No longer: The fish collar, one of the fattiest, lushest, most flavorful parts of the fish, is turning up on menus all over Seattle. This delicacy, long served at Japanese restaurants (“kama” means collar in Japanese) such as Maneki (International District/Chinatown, 304 Sixth Ave. S; 206.622.2631; manekirestaurant.com), where the black cod collar ($7.50) has long had a loyal following, and Chiso (Fremont, 3520 Fremont Ave. N; 206.632.3430; chisofremont.com), where salmon collar ($8) and yellowtail collar ($8.50) are on the menu, is now hitting the mainstream. We’ve seen salmon collar at Steelhead Diner, and hot-smoked salmon collar has made an appearance on Palace Kitchen’s appetizer menu. And we spotted halibut collar on the menu at Ba Bar.

Smoke as a Flavor
For many of us, the taste and smell of wood smoke—clearly a culinary trend riding high this year—evokes something primal. Inducing memories of s’mores by the campfire or hot chocolate by the fireplace, it’s a scent that stirs comfort and nostalgia. So it’s no wonder we’re such suckers for the s’mores cookies at Hot Cakes ($9) in Ballard, where smoked chocolate chips and melting marshmallows add up to a fireside-worthy treat. Martin also uses the smoked chocolate in a baked-to-order molten chocolate cake ($7.50), which oozes house-made marshmallow and intoxicates with the scent of wood smoke in every bite. At The Willows Inn on Lummi Island, the first bite of the sensational multicourse dinner ($150) is a scene stealer: A small hand-carved wooden box is presented, like a gift, to each table. When the lid is lifted, a whiff of wood smoke escapes, perfuming the air, and a nugget of local salmon smoked to a candied finish is revealed perched atop smoldering shavings of alderwood. That salmon nugget? Incredible. And the theatrics? Enchanting.

When former Mistral Kitchen barman Andrew Bohrer (who’s now the spirits director at Vinum Importing, but also moonlights once a month at Vessel) invented the Courting Rachel ($15), little did he know the lasting impression the cocktail would have; it’s been a seasonal favorite on the menu for nearly three years. Essentially a play on an old fashioned, the drink’s magic comes via its presentation: the cocktail, made with Maker’s Mark, rye simple syrup and Peychaud’s Bitters, is poured into a hickory-smoke-filled decanter before being poured over a hand-carved cube of ice. It’s smoky, strong and sly.

Shots. Yes, Shots.
Throwing back an accelerated shot at the bar has rarely been seen as a cocktail connoisseur’s move. Lately, however, more gourmet shots have been showing up. This trend of a cocktail in a small glass (to be consumed at once or slowly, depending on drinker’s inclination) has been kicked into gear by local bar-star-turned-spirit-educator Andrew Bohrer. His new book, The Best Shots You’ve Never Tried, has a host of snazzy numbers in small packages. You’ll also find fancier shots at crafty bars like Rob Roy in Belltown, whose small shot menu includes The Cricket—Fernet Branca, crème de cacao and cream ($7)—and Tacoma’s exquisite little 1022 South (1022 South J St.; 253.627.8588; 1022south.com), whose menu boasts a Kokovoko shot of kava-infused rum, ginger syrup and cayenne ($8). 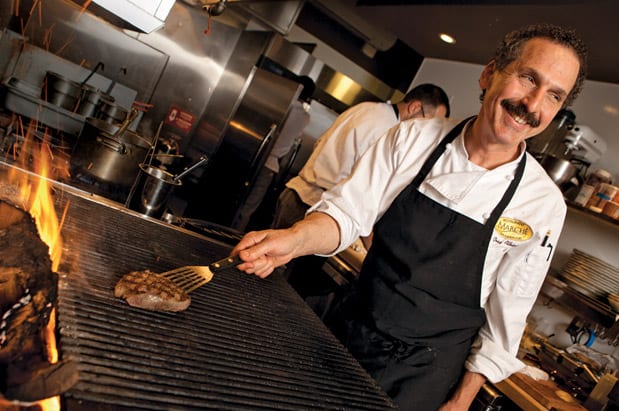 Cooking Over a Wood Fire
The hottest trend of the year involves not what we’re cooking, but how we’re cooking.. Many chefs are heeding the call of the caveman and cooking meats and vegetables over real wood fire. Because it just tastes better. Seattle’s pizza purists have long used wood ovens to blaze chewy crusts and add a whiff of smoke to blistered cheese; barbecue-pit masters rely on a variety of hardwoods under the grill.

Now, wood-fired cooking is going mainstream: At Marché on Bainbridge, chef Greg Atkinson cooks all his meats over wood, mostly applewood. At Matt Dillon’s Corson Building, the outdoor wood-fired oven is used year-round, and at Dillon’s Sitka & Spruce, not only does the local chicken or game birds get roasted in the brick hearth, flatbreads and vegetables gather whiffs of smoke from its fires, too. At Eastlake’s Cicchetti (121 Boston St; 206.859.4155; serafinaseattle.com/cicchetti), the room smells seductively of smoke from the blazing wood-fired oven, and at Ballard’s Essex, Brandon Pettit and his team of chefs cook all of the bar’s meats and seafoods, and many of its vegetables, in the wood-fired pizza oven of neighboring Delancey.

The reimagined and relocated Restaurant Zoë also features a wood-fired grill—actually, a special wood-burning capsule—over which the restaurant’s fabulous burger is grilled. Chef and restaurateur Renee Erickson (Boat Street Cafe, The Walrus and the Carpenter) built her latest restaurant, The Whale Wins around foods cooked in a wood oven. Come this time of year, when cozying up to a roaring fireplace feels like just the thing to fend off the chill, eating wood-fired foods feels right on schedule.

Cocktails on Tap, or Taptails
Starting at Montana, a gem of a bar on Capitol Hill’s Olive Way, cocktails on tap are bubbling up. Co-owner Rachel Marshall (the genius behind wondrous Rachel’s ginger beer) began with one tap, but has expanded to multiple taps with different cocktails, including stalwarts such as the Negroni, the classic Italian combo of gin, Campari and sweet vermouth. At Capitol Hill’s Liberty, owner Andrew Friedman thinks the trend is here to stay: “People love cocktails on tap!” The only real question is about the name: “Taptail” isn’t nearly as fun to say as these cocktails are to drink.