Pompeii on Puget Sound: Could it Happen to Us? 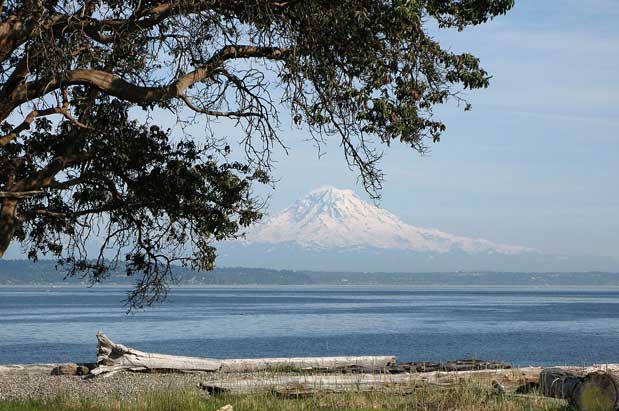 In our bi-monthly Seattlemag.com column, Knute Berger–who writes regularly for Seattle Magazine and Crosscut.com and is a frequent pundit on KUOW–takes an in-depth look at some of the highly topical and sometimes polarizing issues in our city.

A prosperous port city laid to waste by a volcano. You cannot view the current Pompeii exhibit at the Pacific Science Center (runs thru May 25) without feeling some kind of connection or kinship with the ancient Romans who lived and died in a city remembered best for the disaster that befell it at the foot of Mt. Vesuvius in the year 79 AD.

That link is made explicit as you leave the exhibit through a final gallery about the volcanos that surround us: Mts. Adams, St. Helens, Rainier, Baker and Glacier Peak. Helpfully, kids can use touch screens to set off their own eruptions of different kinds to see which spew lava and which unleash brutal lahars and pyroclastic flows. Maps of danger areas are helpfully provided. Note to self: Never live in Concrete which runs the risk of being wiped out by two volcanos, Baker and Glacier Peak.
Still, living in Seattle is hardly placing oneself far from a potential ground zero of natural disaster.
I remember Pioneer Square’s Underground tour used to tout itself as providing access to ruins bigger than Pompeii’s. Later this month, we’ll be hitting the 50th anniversary of the large (6.5) 1965 earthquake that shook Seattle out of bed one late April morning. Remember the influential Washington State Department of Transportation video that showed the Nisqually quake-damaged Alaskan Way Viaduct collapsing, images that proved to be influential in moving ahead the replacement project? You can go to the city’s website and see maps of what sea level rise will do to Seattle low-lying neighborhoods (bye-bye Harbor Island). Other animations will show you the devastation that could be done by a tidal wave in Elliott Bay. Mt. Rainier is regarded as one of the most dangerous volcanos in America, and its mudflows could reach Seattle along the Duwamish waterway and wipe out the Port. Recent books remind us to that in the Northwest, we’re vulnerable to tsunamis and the Big One–a 9.0 subduction quake that could act as the region’s great leveler. Message: Pompeii could happen to us!
We can’t plead ignorance, as the citizens of the real Pompeii could. Though living near Mt. Vesuvius, it hadn’t erupted for hundreds of years, Vulcan was a god and volcanology did not exist. The mountain’s slopes were covered with vineyards. The traditional warning signs, quakes and tremors, were ignored as not uncommon and were not related to volcanic activity.
Life in the city was something we can relate to. Pompeii was a trade center, well-to-do with villas and amazing infrastructure that included a massive entertainment arena and excellent plumbing. Pompeii was a green city of trees and gardens (the volcanic soils helped). It also had lots of “sports” fans. Instead of Seahawks gear, exhibit goers will see gladiator armor that once adorned the impressively huge and healthy physiques of ancient fighters who, we’re told by the exhibitors, were the Rock Stars of their era–or the Marshawn Lynches.
The ash from the eruption preserved artwork, household items. You can get an intimate picture of daily life that is not unlike what you might find in post-apocalyptic Denny-Blaine: their furniture, jewelry, garden statues and votive objects of the wealthy–even their bathtubs–their glassware, and amphoras of imported wines and oils. These people didn’t solely live and eat locally: they had grains from Egypt, ceramics from Northern Italy, and popular wines came from Crete. Their slaves and workers came from throughout the empire.
Their tastes in many respects were different from ours–a large, nude statue of a Roman emperor greets exhibit-goers. I do not think most of us would like to see our politicians toga-less and Full Monty-style, but we certainly aren’t the first culture to revere washboard abs. The Pompeiians were sensualists, if you go by their wall art, and sexually robust if you go by their graffiti and bordellos. They were more public about it than we are, though given that the sex trade in Seattle is booming, one senses we’re no less preoccupied.
Wandering through the exhibit, I wasn’t wowed as I was seeing the artifacts of King Tut, but felt a growing connection which grew when I entered the gallery featuring the plaster casts of the bodies of some of Pompeii’s victims. Most of Pompeii’s residents are believed to have escaped–the eruption unfolded over the course of a long day. It is thought that about 18,000 of its 20,000 residents got away, with some 2,000 killed. The casts were made from cavities in the earth left by some of those who didn’t make it, most likely killed by hot gas from the volcano. It is poignant to see men, women and children curled in defensive poses, or reaching out in the moment of death as if for help. They are essentially burn victims whose last moment in life was captured in the geologic record and they amount to a tableaux of pain, and warning. All in white, the figures are like ghosts made manifest.
Exiting through the gift shop, feeling more mortal than before I entered, I was not inspired to take home a Pompeii exhibit coffee mug.
I left with that thought: That could be us after an unlucky day.