The Problem of Pampered Pets

With dog spas, designer sweaters and “yappy hours,” Seattleites are loving their pets to death. 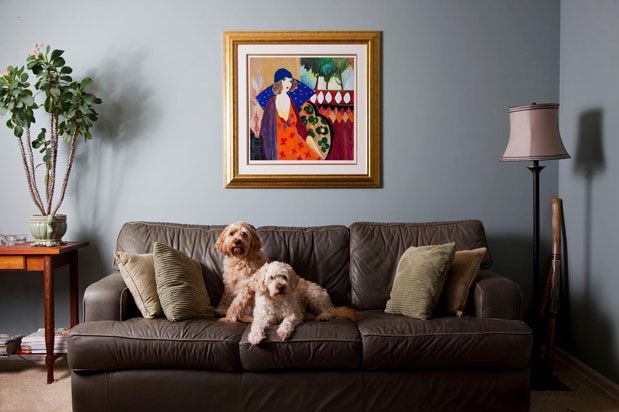 Forget images of Lassie devotedly tugging Timmy out of an abandoned well. The iconic Seattle dog lover is a single lass who loves her pooches so much they share lattes at Starbucks.

I stumbled upon this ritual a few years ago at Alki Beach, where I first watched a dog owner share her warm coffee drink with two fawning canines. She sipped from the cup, then let her dogs lap sloppily from it, then she sipped from it again. Sip, slurp, repeat. It was more than enough to alarm Rick Santorum about the slippery slope of French kissing other species.

Now, without going too far down that path—one that could lead to a barn in Enumclaw or a stage in Tijuana—let’s simply say that Seattle is a town with lots of adults who are very close to their pets. Pet closeness of all kinds is highly exaggerated here. Some years ago, I took a sick and dying lab rat to the vet, at the tearful behest of my children, and was asked by the doctor to fill out a medical history that asked me if the rat was a “beloved pet” or a “member of the family.” There was no box to check for “grotty little rodent.” Of course, I did the humane thing and spent a month’s pay buying “Ratty” another week or two of wretched existence. To do otherwise would have pegged me as a monster.

In PC Seattle, it is expected that we treat animals “ethically,” and fetishize them, which seems like a contradiction to me. Many people who are aggressively protective of their pets act like dominatrices (“Sit!” “Stay!” “Heel!”), at once bossy and adoring. I once walked into a bakery in Pioneer Square and noticed a young woman looking at me with what I took to be great interest. I was single at the time, and flattered, then suspicious. I looked behind me and realized her smoky gaze was fixed on her beloved Fido tied up at the door. It gave me the impression that true love comes on the end of a leash.

Some years ago, I took a sick and dying lab rat to the vet, at the tearful behest of my children, and was asked by the doctor to fill out a medical history that asked me if the rat was a “beloved pet” or a “member of the family.” There was no box to check for “grotty little rodent.”

Seattle, naturally, allows animals a wide range of rights: Dogs are in bars, they ride the bus, and the city is dotted with “dog spas” and dog yoga classes. Shops sell baked doggie treats worthy of Martha Stewart’s table. Outside some cafés, mutts are provided their own bowls for socializing and refreshment, and in cooler weather, you frequently see exotic breeds in designer sweaters milling around the door like groupies outside the Westminster Kennel Club. Walking in and out of these cafés can be like running a gauntlet of probing noses. If dogs are people, too, how come they can goose strangers without penalty?

You’re lucky if that’s all they do. If dogs are family members, they are often indulged like spoiled children. I remember visiting a friend’s house and being set upon by a yapping ball of fur named Cappuccino. When the dog’s mistress picked him up, the overly excited Cappy proceeded to urinate on me like a fountain cherub. No apology from the owner was forthcoming, no offer to wipe my shirt. Just a shrug: Dogs will be dogs. Our tolerance rules seem to judge it your fault if you step in a pile of shih tzu.

Seattle has long been concerned about extreme abuse of dogs. During the Alaska-Yukon-Pacific Exposition in 1909, locals were appalled that a “primitive” tribe from the Philippines on display at the fair was reportedly going to cook and eat dogs. “Igorrotes to Have Dog Feast” hollered a headline in the Seattle Times. A professor from Cambridge came to the tribe’s defense. “[I]s a dog’s life any more sacred than a cow’s or a pig’s or a chicken’s, all of which most of us eat with great relish?” he asked. The feast apparently turned out to be hype, but it did increase the exhibit’s box office. I was sad that the recipe for dog relish was not forthcoming.

Still, as Seattle turns toward urban farming with legalized chickens and mini-goats, perhaps our pet-o-philia will moderate with attitudes that treat dogs neither as food nor as spoiled lapdogs for the lonely. We’re literally loving these creatures to death as rates of dog obesity and diabetes are soaring along with our own. It’s time to stop treating city pooches as overly pampered coffee- and cupcake-consuming mini-mes.

Write editor at large Knute Berger at knute.berger@tigeroak.com. His Mossback column is at crosscut.com.