How the Seattle Steelheads became the baseball team the city almost forgot.

This article originally appeared in the May 2013 issue of Seattle Magazine. 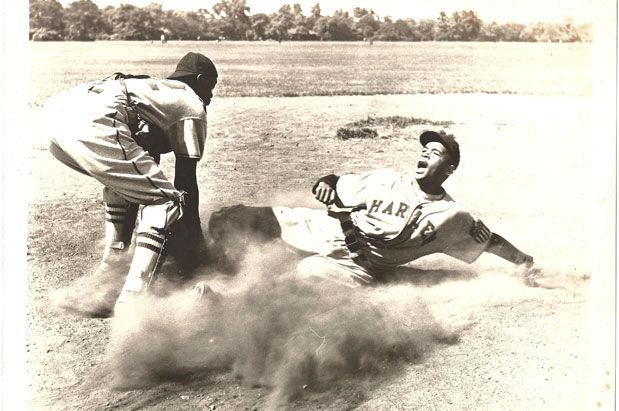 On September 9, 1995, the Seattle Mariners took to the field at the Kingdome wearing plain white uniforms with dark blue trim. The word “Steelheads” emblazoned across the players’ chests was a complete surprise to many in the stands. The M’s were sporting replica jerseys of the pre-integration, African-American Seattle Steelheads baseball team, whose very existence had, until that moment, been largely relegated to historical obscurity.

On that day, teams across the Major League honored the surviving players from the Steelheads and other Negro league teams, who had toiled in the shadows of baseball before the gradual integration of the sport in the 1940s and ’50s. The old-timers on hand told the media that life in the Negro leagues could be grueling. When the team traveled across the country, the Steelheads struggled to find places to bunk overnight because white hotels refused to rent rooms to them.

Still, former Steelie Sherwood Brewer told The Seattle Times that the indignities were worth it. “I had a lot of fun,” Brewer said, “and if I had to do it again, I’d start tomorrow.”

Brewer, along with many of the other players honored that night, has since passed away. Today, 92-year-old Herb Simpson is believed to be the only remaining Steelhead.

Simpson’s memory of his time in Seattle is fuzzy, and he doesn’t reveal too many details about life with the Steelies. But his modest house in hometown New Orleans is stocked with memorabilia from his playing days, including his Steelheads jersey, which he shows to visitors with pride. He is one of the final ties to this bygone era.

It was an aggregation of talented athletes who just wanted to play somewhere, somehow.

The Steelheads were the culmination of a long tradition of African-American baseball in the region. “Baseball was hugely popular in Seattle’s black community,” says Lyle Wilson, a local lawyer and historian who has researched extensively the history of black baseball in Seattle. “From the early 1900s through the ’50s, Seattle had a black team.”

After so-called “organized baseball” had firmly drawn the color line by 1890, African-American players formed teams in just about every major city in the country and at various levels, from amateur to semipro to professional. Wilson says the city’s black baseball tradition can be traced back to the early 20th century and included aggregations such as the Keystones, Queen City All Stars, Royal Giants and Carver Athletic Club.

Then came Abe Saperstein, part businessman, part huckster, whose Harlem Globetrotters basketball team, and to a lesser extent, his Globetrotters baseball squad, made him one of the preeminent sports entrepreneurs in the country.

On the Pacific Coast, Saperstein saw what he believed was a golden opportunity to capitalize on the influx of thousands of black workers in search of work in the Pacific Coast’s industrial economy. He roped in runner Jesse Owens, whose gold medals in the 1936 Olympics hadn’t blossomed into long-term financial success, to form the West Coast Negro League, also frequently known as the West Coast Baseball Association.

The league held its first meeting in Oakland in January 1946, during which Saperstein was elected president, and Owens, vice president. Founders settled on six franchises—Seattle, Portland, Oakland, San Francisco, Los Angeles and San Diego—a 110-game season and a $500 franchise entry fee, although some teams never ponied up that money, an early sign that the league might be on rocky financial footing.

But the formation of the West Coast league was overshadowed on sports pages across the country by a historic development—just a few months before the coast organization met in Oakland, Brooklyn Dodgers owner Branch Rickey signed Jackie Robinson to a minor league contract, tapping the UCLA grad and Negro league star as the man who would reintegrate first the minor leagues, and then the majors.

The news of Robinson’s inking took the country by storm, especially the African-American media, which closely followed developments. Robinson debuted for the Dodgers’ top farm team, the Montreal Royals, on April 18, just as the league was starting up, essentially guaranteeing the new Pacific loop would be mostly ignored by American journalists, black and white.

Seattle baseball historian David Eskenazi says Robinson’s signing, while crucially important to American society as a whole, portended disaster for the fledgling league. But those involved in the coast league, especially the players, can be excused for going all in.

“It was an aggregation of talented athletes who just wanted to play somewhere, somehow,” Eskenazi says. “They got swept up in this. The whole West Coast Negro Baseball League perhaps weren’t seeing the handwriting on the wall with major league integration that was changing the face of baseball.”

But the West Coast league’s leaders forged ahead anyway. The league’s six franchises worked out deals to play in the stadiums previously reserved for teams from the segregated Pacific Coast League (PCL), one of the top minor leagues in the country, while the PCL teams were on the road.

In Seattle, that meant the Steelheads would compete in Sick’s Stadium on Rainier Avenue South, which served as the home base for the PCL’s Seattle Rainiers, a franchise that dated back to 1903. (Sick’s would also be home to the city’s first major league team, the Pilots, during its one and only year in Seattle in 1969. It was demolished a decade later. )

The Steelheads were birthed by Saperstein himself, who stocked the Steelies’ roster with most of the players who made up his Harlem Globetrotters baseball team in the mid-1940s. The Globetrotters existed largely as a barnstorming squad; they traveled the country taking on any and all comers of all races. Owens often accompanied the Globies, racing against men and even horses between innings to attract more fans. Barnstorming was such a financial necessity in black baseball that virtually all of the squads, including the Steelies, played dozens of nonleague contests across the country to supplement their revenue.

That meant that Saperstein was ostensibly the owner of the Steelheads, although the ownership of the club appears to be murkier than that. While Saperstein supposedly pulled the strings, the franchise’s listed owner was former Seattle cop Claude Norris, according to Eskenazi. However, rumors circulated, and continue to circulate, that the team’s ownership had ties to organized crime, or at least illegal activity.

Such a situation certainly wasn’t isolated in the world of black baseball. One of the 1930s’ most successful Negro league teams was the Pittsburgh Crawfords, which were owned by numbers runner and quasi-mobster Gus Greenlee.

The Steelheads launched their league slate on May 12, 1946, by splitting a road doubleheader against the Portland Rosebuds. The contests received a single paragraph of coverage in The Seattle Times, which would become the norm in terms of media recognition.

By mid-June, things were rapidly declining. Although the Seattle franchise turned in decent gate receipts, such wasn’t the case elsewhere in the league, and travel costs hampered teams’ schedules. By July, the association’s collective hopes were over, not so much coming to a crashing, official halt, but an unceremonious petering out.

The league had disappeared, but Saperstein and the Steelheads didn’t, at least not entirely. The squad reverted to a barnstorming aggregation, at first keeping the Steelheads name but eventually re-adopting the Harlem Globetrotters moniker.

What fascinates Jonathan Shipley, who wrote about the team for the Washington State Historical Society, is that, even for a heady but fleeting few months, the Seattle African-American community rallied around a team of its own. Such devotion reflects the way the city has, for decades, nurtured small but thriving ethnic and cultural populations.

Ryan Whirty is a freelance writer based in New Orleans who specializes in sports history and, in particular, the Negro leagues. He holds two degrees in journalism from Indiana University with a master’s concentration in African-American studies. He is a regular contributor to Baseball America magazine, and he has written for ESPN.com, The Hockey News, and several newspapers and magazines. He is currently working on a book for LSU Press about African-American baseball in 1880s New Orleans.

Ichiro Suzuki Is Stepping Away from the Field

He isn't officially retiring, but he's taken a front-office position with the team. Plus: Watch a video of what might be his final at-bat in Seattle.

Netflix’s 'GLOW' may have put professional wrestling in the zeitgeist again, but it has nothing on Seattle-based Lucha Libre Volcánica.

Olympia's Three Magnets Brewing Co. made a beer to honor its favorite team, but not everyone was thrilled.