This article originally appeared in the September 2013 issue of Seattle Magazine.

There are two broad schools of thought when it comes to modern cookery. On the one hand are the modernist cooks, whose use of molecular gastronomy techniques and equipment—immersion circulators, sous vide machines, agar-agar and so on—can make diners feel like they’ve been rocketed into outer space. That plate dotted with what looks like blackberry jam? Turns out those are spheres of dehydrated, ground, and then rehydrated lamb “jelly.” Yum? These chefs are quite precise, playful and tricky but exacting in their measurements. We could call them the scientist chefs.

The other movement gaining momentum among modern chefs is that of the extreme-locavore. This goes well beyond the mainstream “farm to table” movement to include chefs such as Blaine Wetzel at Willows Inn on Lummi Island, who, along with his team of chefs, quite literally gathers dinner ingredients—berry flowers, wild herbs—during daily foraging walks around the restaurant and its adjoining beaches. These chefs embrace their restaurant’s place on the map by being seasonally aware to an extreme—actually, forget seasons, we’re talking about what’s at its peak flavor each day. These chefs are improvisational by nature and by necessity; there’s little time to refine and tweak when the menu changes three times a week or more. These are the jazz-musician chefs. 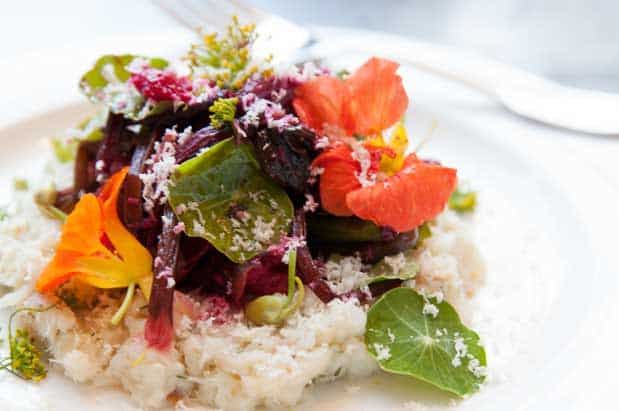 Chef Matt Dillon falls quite squarely into the latter category. Dillon’s cooking—at Sitka & Spruce, The Corson Building and now at Bar Sajor in Pioneer Square—is solidly grounded in the here; he grows a portion of his restaurants’ produce and raises animals on his Vashon Island farm. And Dillon celebrates the now; his menus shift almost imperceptibly as the clock turns, featuring, say, tender, spindly baby onions one week, mature bulbs later and finally the onion’s flowers, mixed into butter with sea salt to spread onto marvelous house-made sourdough. Dillon’s cooking has evolved along with his tastes. His use of unusual vegetables and spices, ancient grains, nuts, yogurts and honeys is deliberate; there’s a certain sophistication to it. There’s something quite chic about a small plate of smoked house-made yogurt with radishes and their greens, tender buckwheat crackers—made in house, too, naturally—alongside ($12). Or a lunch of wood-oven-roasted broccoli dressed in cod butter topped with a fried farm egg ($14). Then again, in a room as splendid as Bar Sajor’s, a little elegance is bound to rub off. Pictured above: Smoked and salted ling cod with potato and horseradish, beets and nasturtium

Entering through the corner door off Occidental in the reenergized Pioneer Square neighborhood, diners find their eyes drawn to the glowing wood oven, built into an expansive white wall. There, a gentle fire kisses smoke into the tender flesh of rotisserie chickens ($21 for half, served with seasonal accompaniments) and innumerable vegetables; stacks of firewood and the kitchen’s mise en place (prepared ingredients in small bowls) are on display along with wildflowers and herbs casually gathered into vases. It’s a European country-kitchen still life.

Once seated, you’ll likely note the size of the open kitchen—it takes up a good quarter of the expansive, airy, sensationally pretty room. Let this be your first clue about how things go at Bar Sajor. This is not a kitchen tacked onto the back, hidden away to maximize the dining room capacity. This is a kitchen that takes up precious real estate. A kitchen that takes into great account the experience of the chefs. A kitchen for putting on a show. A jazz-musician chef’s kitchen.

And so, you’ll taste food here that has a quite distinct point of view; food that will likely challenge you. Bar Sajor embodies a paradigm shift in the larger dining 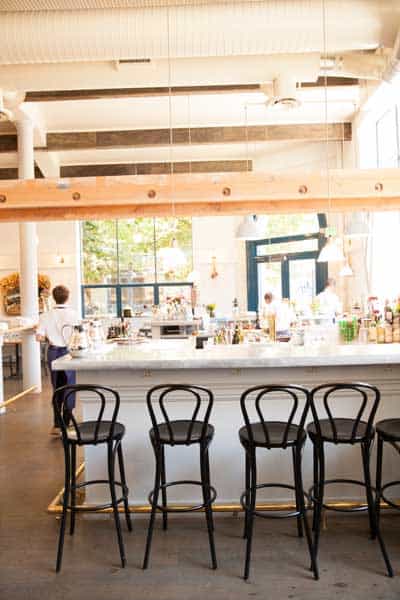 scene, one that’s been a long time coming. Pleasing people, while still nominally important, isn’t the chef’s first priority; the chef’s artistic expression is. At Bar Sajor, Matt Dillon and his team of chefs are cooking how—and what—they want. You likely didn’t know you wanted to eat cured pork loin and local silver smelt together, let alone with pickled fiddlehead ferns and king bolete mushrooms ($16). But now that you’ve tasted it, yes, you see it all makes sense. Holy hell, that was good. It’s for this kind of discovery that you eat at Bar Sajor.

The results of all the cooks’ riffing are often stunning, especially larger, sharable entrées cooked on the wood-fired rotisserie—a leg of lamb with sheep’s milk cheese and green almonds ($25), or a whole fish roasted in the wood oven ($24)—and the marvelous charcuterie. Some is outsourced—Portland’s Olympic Provisions provides the excellent salami ($11)—and some is house-made, such as the chicken liver mousse with pickled huckleberries ($12.50).

But it can strike a sour chord, too. The menu’s Rockwell beans with confit giblets, Treviso and chopped egg salad—a small bowl of beans, mixed up with fried chicken giblets, chopped egg and bitter greens ($12.50)—arrived with…crackers? A harrowing balancing act ensued, the beans rolling to and fro on their way into our mouths. Sadly, several of those little guys just didn’t make it. Another miss: rhubarb made even more teeth-achingly sour with a dressing of vinegar, this served alongside cured salmon a smidge past its prime. And a pizza ($13.50) topped with a wondrous wealth of morel mushrooms in spring: chewy crust, stinky cheese—it should’ve been dreamy. But then I noticed one of my fellow diners topping her slice with a piece of ham. Yes, someone forgot the salt, and those mushrooms needed it badly.

One wonders, perhaps too often, whether diners double as taste-testers. Are we eating the first iteration of this dish?

There’s little doubt that Dillon’s improvisations serve to push Seattle diners’ palates past their comfort zones, and in doing so, discordant notes are bound to happen. Often, Dillon’s riskier dishes are like a song you aren’t sure you like at first, but after a few listens, something shifts. You taste once, then again, and maybe you start to get it. Maybe you even start to like it. But still, you understand that it’s an acquired taste. THE SCENE
Bar Sajor’s instant allure lies in its look and feel. Credit chef Dillon and three friends, who chose a white-on-white palette enhanced by textural details and natural materials: zinc on the bar tops, wainscoting on the banquettes, and hand-hewn hemlock tables with natural edges—including one that spans two support beams, meant for guests to lean on as they dine or tipple an aperitivo or espresso while standing. But there’s no question that strongest impact comes from local artist Tamara Codor’s enchanting gold-leafed objet trouvé mirrors and her custom ornate sculptures built to look as if they’re emerging from the wall above the ovens.