Named for Eric Tanaka, Tom Douglas’ longtime executive chef, TanakaSan opened in May and heralds Douglas’ return to the Pan-Asian flavors that once defined Northwest cuisine—and to flavor profiles the chef hasn’t played with in recent years. Centrally located at the base of the quite stylish Via6 apartment building downtown, TanakaSan is a spirited place: noisy, and popular with young singles in small groups, as well as business lunchers and families. And it’s sprawling, with room for 150 in its sleek interior of metal, concrete and glass. It’s also a little tricky to figure out: TanakaSan is part of a larger, somewhat confusingly laid out main-floor series of food spots jointly called Assembly Hall, which sprawls along Sixth Avenue: On the south end is the Assembly Hall coffee shop and fresh juice bar; on the north end, a very well-stocked market with one heck of a salad bar (Home Remedy); in the middle is TanakaSan; and there’s an interior hallway that links them all. 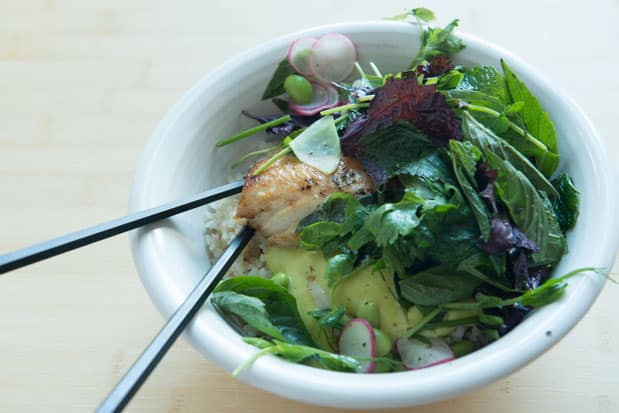 Servers are enthusiastic about the mix of plates, and several dishes live up to their exultations—particularly the smoked black cod served over rice ($18, dinner only) with an impossibly delicious avocado hollandaise sauce and a perfect fried egg; the Osaka pancake, a particularly addictive version of okonomiyaki, the eggy Japanese cabbage pancake topped with bonito flakes ($6 at lunch, $13 at dinner); and a very inspired radish and pea vine salad in mustard vinaigrette ($5 at lunch; note that during lunch, many plates are dim sum size, i.e., very small). But at other times, servers’ suggestions were puzzling: I twice ordered curried lamb dumplings ($6 at lunch, $13 at dinner) based on their advice, only to find the dumplings’ skins tough and greasy. And the servers’ fawning over the duck sausages in soft, pillowy “pinch buns” ($6 at lunch, $12 at dinner) is also overselling; they’re tasty, but they could use a little something. Drinks—both boozy (sake slushies! $7) and virgin (try the Galangale, zingy with kaffir lime, $5)—are quite fun, refreshingly devoid of pretension. So is TanakaSan, actually. Once the food kinks are worked out, it oughtta be a fun place for fusion. Lunch and dinner daily. Downtown, 2121 Sixth Ave.; 206.812.8412; tanakasanseattle.com