This year, we're going back to the classics 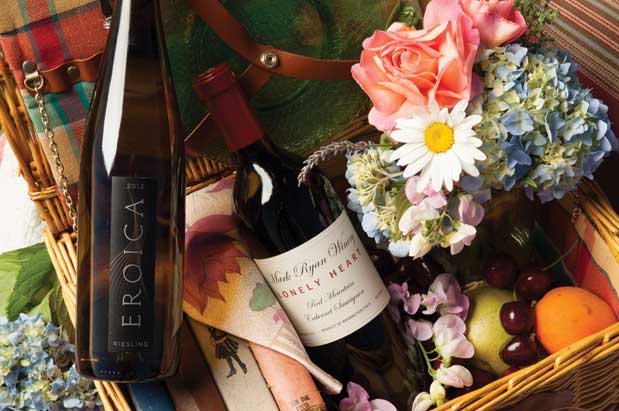 For the past nine years, the Seattle magazine Washington Wine Awards have taken the measure of Washington’s wine industry as it has matured from upstart on the national scene to a world player. We’ve followed winemaking trends, from the local boom in Bordeaux-style reds and unoaked Chardonnay to praise for our earthy Syrah and world-class Merlot, keeping tabs on small-production garagiste wines and the best grapes grown in the state’s 13 American Viticultural Areas (AVAs), and beyond.

After years of exploring the evolution of Washington wine, we return to the basics. Washington winemakers are gaining more attention for classic wines—Cabernet Sauvignon, Merlot, Riesling and Chardonnay—the “noble” grapes that attract excitement and loyalty around the world. This year, our judges focused on the best of these grapes, and the wines we all love. We’ve also carried on the tradition of honoring some of the outstanding individuals in Washington wine—those passionate people who make our state a thrilling place for wine, year in and year out. Rasa
Brothers Billo and Pinto Naravane call their winery the “manifestation of a dream.” In 2007, after nearly 20 years in the computer industry, these high-powered techies made the jump to start their own winery. They first explored Napa, Sonoma, Paso Robles and Mendocino to plant vineyards, but then saw the opportunity in the emerging area of Walla Walla Valley. Billo attended the University of California–Davis for winemaking, and together the brothers bought 28 acres in The Rocks District, just south of Walla Walla. While the 9 acres of grapes become established, the brothers have worked with some of Washington’s premium vineyards, including the Walla Walla Valley’s Seven Hills and Les Collines vineyards, plus up-and-comers SJR and XL. Their focus on quality has paid off in stunning wines, including superpremium reds (and some whites) that reflect the terroir of the vineyards from which they acquire fruit. Their Rhône-style wines—the 2010 Principia Reserve Syrah, for instance—are a complex, hedonistic experience, with notes of dark fruit, bacon fat and black pepper, espresso and garrigue (the French term for the aroma of fields of flowers and dried herbs). We’re excited to watch as they explore their new vineyard and new styles, laying down superb wines that should shine in the next decade and beyond.

Cortney Lease, wine director of Wild Ginger/The Triple Door
Wild Ginger’s cellar has grown over the years to about 2,500 selections from some of the best wines in Washington—and the world. Currently watching over that precious stash is Cortney Lease, whose excellent palate, dedication to quality and way with people make her our pick for Sommelier of the Year. It seems that everything in Lease’s life has lead her to wine. She received a chemistry degree from the University of Washington, which, along with her time at Oddbins wine shop in Cambridge, England, no doubt helped her in her studies to earn the advanced sommelier certificate from the Court of Master Sommeliers. No small feat; this third-level certification takes years of focused tasting and study to achieve. But it’s Lease’s connections with people in the wine business, her extensive knowledge and ease with diners at both The Triple Door and Wild Ginger that make her a standout among sommeliers and at this gourmet Asian restaurant, where Rieslings are the quintessential match with the restaurant’s flavorful, sometimes spicy food.

Greg Harrington, Gramercy Cellars
Of the many dreamers who started wineries in Washington in the past 10 years, Greg Harrington has one of the most dramatic stories. After sampling wines from Walla Walla at a backyard picnic/tasting in Brooklyn in 2004, he and his wife headed to the source to taste more, and within a year, they relocated and started Gramercy Cellars—bringing a bit of New York with them in the winery’s name and in the detail of a wrought iron fence surrounding Manhattan’s quaint Gramercy Park on the label. As a Master Sommelier who has worked with many famous chefs, including Emeril Lagasse and Wolfgang Puck, Harrington knew wine, and knew what he wanted to produce. Exploring Rhône-style wines—Syrah, Grenache, Mourvèdre, Viognier and Picpoul—he has also had great critical success with other lesser-used grapes, such as Tempranillo. His Inigo Montoya (of Princess Bride fame) shows what this grape can do outside of Spain, with luscious fruit and bright acidity, soft spice and earthiness that blend in a lively, delicious and food-friendly wine. He also partnered with Waters Winery to produce an affordable line called Wines of Substance (which was purchased by Charles Smith last year), to showcase a “periodic table” of varietal wines. Beyond winemaking, Harrington’s faith in the future of the Washington wine industry—and dedication to his dream—make him a perfect representative of his generation: young, passionate winemakers who are building on the first 30 years of wine in Washington and forging headlong into the future.

Jeff Lindsay-Thorsen, W.T. Vintners
Sommelier turned winemaker Jeff Lindsay-Thorsen has tasted some wine in his time. He was a general manager and wine director at Cafe Juanita in Kirkland, sommelier at Wild Ginger in Bellevue, and now is lead sommelier at Michael Mina’s RN74 downtown. Not to mention that in 2008, he won the Pacific Northwest Super-Regional Best Young Sommelier Competition hosted by La Châine des Rôtisseurs International Food & Wine Society. Now, he’s making wine as well. W.T. Vintners (White and Thorsen) began when he and his friend George White, an oenophile with a background in business and technology, decided to take their passion for wine one step further. This winery is focusing on “terroir-driven” wines that express the soil and climate of the vineyard in which they are grown. Lindsay-Thorsen is also making organic and biodynamically grown fruit a priority whenever possible, as well as farming practices that prevent the grapes from becoming too ripe (which avoids high alcohol and overly fruity wines). The duo loves the wines of the Northern Rhône, Germany, Austria and Burgundy—all lighter styles of wine that emphasize a balance between acidity, alcohol, minerality, fruit, wood and tannin. W.T.’s beautiful Grüner Veltliner, for instance, is grown in the Underwood Mountain Vineyards in the Columbia Gorge AVA, which has a similar setting to this grape’s birthplace, the Wachau in Austria. Lindsay-Thorsen used a traditional method of fermentation—part stainless steel and part neutral barrel—to balance austere acidity with soft Meyer lemon, nectarine and herbal spice for this lovely wine. We look forward to tasting more of these elegant and fascinating wines. Field of dreams: brothers Jerry (left) and Butch Milbrandt in their Evergreen Vineyard in Ancient Lakes (2014 Vineyard of the Year). Photographed on June 19, 2014

Tucked along the Evergreen Ridge in north-central Washington between the towns of George and Quincy, Evergreen Vineyard, in Washington’s newest AVA, Ancient Lakes, is becoming known for grapes that produce stellar wines, including bright, dry Rieslings and lovely, clean Pinot Gris. Planted in 1998 by brothers Butch and Jerry Milbrandt, this 1,000-acre vineyard was formed when the great Missoula Floods came through about 12,000 years ago, scouring the deep pools and the Columbia River, and leaving a unique soil profile, with clay, sand, silt and caliche soils. With a cooler climate than the surrounding area, this is outstanding terrain for growing Chardonnay, in addition to Pinot Gris and Riesling grapes, as evidenced by the delicious food-friendly wines coming out of this vineyard from Trust, Efestē, Charles Smith, Seven Hills, L’Ecole and, of course, Milbrandt Vineyards wines themselves. The Milbrandts say they have farming in their blood; they planted their first vines in 1997, and are now farming more than 2,300 acres of grapes for some of the top labels in the state.

Retailer of the Year

Dan McCarthy of McCarthy & Schiering
For decades, Dan McCarthy and Jay Schiering have been garnering “best retail wine shop” awards from all over the country (Food & Wine magazine, 1998; GQ, 2004). We’ve known all along that we had two of the best wine shops right here; the McCarthy & Schiering shops on Queen Anne and in Ravenna are where wine lovers go to find out about and taste new wines at the weekly public wine tastings. You may be lucky enough to be led through selecting a wine by McCarthy himself, who has been at the helm for more than 25 years with his friendly manner and encyclopedic knowledge of wine. Many future sommeliers and winemakers cut their teeth working for M & S, relishing the opportunity to taste unique, small-production wines from Austria to New Zealand and everything in between. After all these years, McCarthy & Schiering’s Northwest selection remains top-notch; you may meet a future winemaker behind the counter, refining her palate, or a Master Sommelier pouring his latest favorites. McCarthy & Schiering has managed to carve out a place for itself in Seattle as the go-to shop for advice, friendly service and a cutting-edge selection. Winemaker Kit Singh and director of marketing Riinu Rammal traveled a long road to their Woodinville winery, Lauren Ashton Cellars, named after their two children, Ashley Lauren and Ashton Troy. Singh studied chemistry at the UW, then became a successful dentist, but always had a passion for wine, which eventually lead him to study winemaking at UC–Davis, work at DeLille Cellars and teach at the Northwest Wine Academy. Rammal’s native Estonia inspired these captivating labels, delightfully teasing us with a fraction of a bird’s-eye-view of rooftops of some of the country’s beautiful traditional castles, churches and windmills, expressing simple elegance and architectural power. The same words might describe Singh’s wines as well. Drawn from excellent vineyards, such as Dineen, Ambassador, Den Hoed and others throughout the Columbia Valley, his wines show the subtleties of the winemaking process, rather than just the pure power of the fruit. What’s more, these labels express the story of the couple, who joins many other Washington winemakers in celebrating their cultural heritage through wine, and demonstrate the increasing acceptance of Washington wine on the global stage.

To see the rest of the winners, visit each of the links below. Ready to stock up on these award-winning wines? Go here to view our 2014 Washington Wine-Buying List.

Read more about how we conducted our 9th Annual Washington Wine Awards.