Seattle’s Ugly Past: Segregation in Our Neighborhoods

Tracing the history of organized intolerance in Seattle. 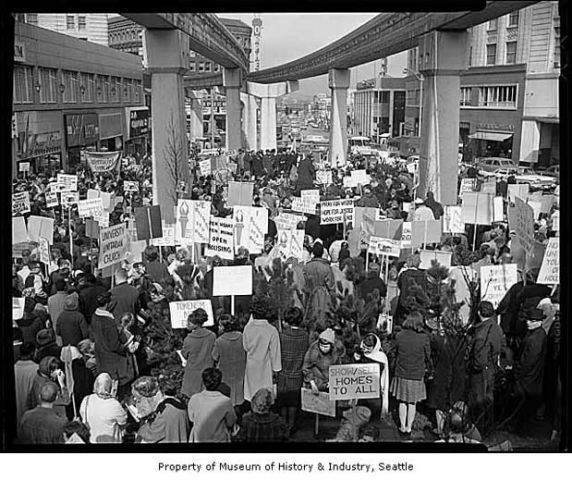 This article originally appeared in the March 2013 issue of Seattle Magazine.

Newcomers to Seattle love the variety of neighborhoods. We’re a counterpane of livable places with modest and grand homes often tucked together in a green and pleasant landscape. It’s a residential smorgasbord of cultures, home styles and enclaves, from houseboats to high-rises, bungalows to classic boxes. But that excitement of choice wasn’t always there for everyone. For most of the 20th century, the city was restricted and segregated, if not literally gated.

A clear-eyed view of our past reveals a history of racial and ethnic intolerance. In the 19th century, all Native Americans were banned from living in Seattle, a city named for a local tribal leader. In the 1880s, Chinese workers were expelled amid riots. The Japanese internment during World War II remains a stain.

But Seattle’s exclusionary practices extend beyond those events, and were in place much more recently. The city was stitched together with racial exclusions written into property deeds and community covenants. Real estate agents and lenders used “redlining” to draw racial boundaries. In 1960, Seattle was 92 percent white. More than 90 percent of Seattle’s black population was pushed into the Central District. In 1964, Seattle voters soundly defeated an “open housing” ordinance that would have let anyone live anywhere. It lost by more than 2-to-1. The city was segregated, and a large majority wanted it that way. According to MOHAI: “Reverend Samuel B. McKinney speaks through a megaphone at a segregation protest meeting in front of the Seattle Municipal Building. Listening are Mayor Gordon S. Clinton (left), Reverend Mance Jackson (right) and an unidentified boy. In response to calls for action on open housing and other issues, the mayor announced plans to fund a civil rights unit.” Photo courtesy of MOHAI.

While there were vocal advocates for integration, it took the assassination of Dr. Martin Luther King in 1968 and the resulting Central District unrest to finally get an open housing ordinance passed. The City Council voted for it unanimously just three weeks later.

The University of Washington has documented the practice of prejudice in real estate as part of the Seattle Civil Rights and Labor History Project (depts.washington.edu/civilr). If you really want to understand where you live, check census maps and covenants listed by neighborhood on its website.

Areas ranging from parts of Alki and Ballard all the way through the alphabet to View Ridge and Wedgwood were restricted to “whites and Caucasians only,” or banned “Jews” and “Hebrews,” “Negroes” or “Ethiopians,” “Asiatics,” Chinese, Japanese, “Hindus” or “Malays” (Filipinos) from owning property or residing there. In wealthier enclaves, such as Windermere and Broadmoor, domestic servants were conveniently exempt.

The covenants were mostly a 20th-century phenomenon. Although much of the city had been platted before they were in vogue, this didn’t deter neighborhood organizers. In 1927, for example, white Capitol Hill residents went door to door asking homeowners to insert restrictive language into their deeds to keep blacks south of Madison Street. Eventually, the restrictions covered 183 blocks on the hill.

In the 1930s and ’40s, Boeing Co. founder William Boeing and his wife imposed “white or Caucasian race”–only covenants on their new North End developments such as Blue Ridge, Richmond Beach and Innis Arden. Even Seattle’s pioneer public housing efforts had to fight hard to include minorities. The primary mover behind Yesler Terrace, Jesse Epstein, argued in 1940, “We have an opportunity to prove that Negroes and whites can live side by side in harmony.” The Yesler Terrace area was already mixed by Seattle standards. Still, a quota of 20 percent for people of color was set. More than that and people feared it would become a “ghetto.”

The current population of Seattle proper is just under 70 percent white and boasts diverse ZIP codes, such as the Rainier Valley’s 98118. But the legacy of segregation is still apparent on the map and in social patterns: The Ship Canal continues to be a rough diversity divide between north and south. Seattle public schools are attended disproportionately by students of color—nearly 60 percent are minorities—while many whites have opted for private schools.

Today, we’re still building and renewing neighborhoods from Yesler Terrace to South Lake Union. We talk less explicitly about race, with arguments now focusing on affordability and gentrification. Diversity and integration, racial and economic, are Seattle strengths, but we can’t take for granted that they will happen on their own. Our residential template evolved from intolerance and is a work in progress.

Write Knute Berger at knute.berger@tigeroak.com. His Mossback column is at crosscut.com.