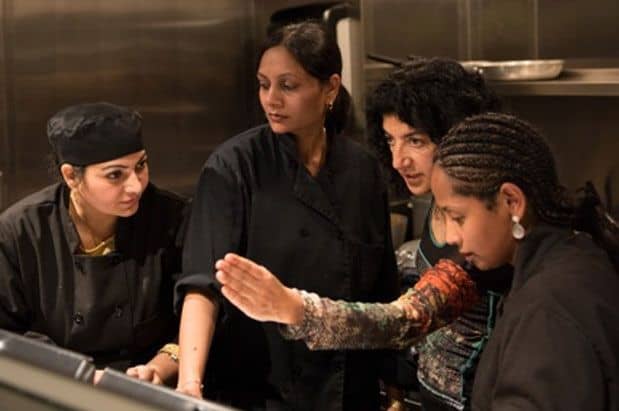 Mourning is permitted. When our food and dining editor Allison Austin Scheff rated Shanik’s debut in South Lake Union in 2012 as the most exciting restaurant opening of the year, leagues of Seattle diners tweeted consensus over what seemed an impossible fortune: no more would we need to trek to Vancouver for the world-renowned modern Indian cuisine of Vij’s co-owner and chef Meeru Dhalwala; it had just come to us!

And now, just over two years later, it’s leaving us on March 21. Shanik’s early challenges were well publicized, but when I interviewed Dhalwala in December, it seemed like she had figured Seattle out and Shanik had become an exciting outpost for her to explore new opportunities. What changed?

“Sales have never been great,” she says. “After the holidays, Monday to Wednesday evenings just got deader.” When she and I talked two-and-a-half months ago, the chef explains she “was basically being pretty hopeful” about the restaurant’s future.

Dhalwala and business partner Oguz Istif made the fairly sudden decision to close Shanik late last week, concluding that it is simply too fancy for its South Lake Union location, where the Indian style of decoration feels lavish to many. They also said it needed a stronger bar presence from the start.

“We were not thinking bar culture; we were thinking Vij’s. All I’d heard was ‘Seattle loves Vij’s’,” Dhalwala says. “I have to take some responsibility; I could have done some research on my own. Everything is so wise in hindsight.”

As Shanik stands, she says, the bar feels like “an afterthought” in the back corner of the eatery. And “who wants to talk through a big empty restaurant to the bar?”

If she had it to do over: “I would open up my own little den in a neighborhood, a cozy 30-seat restaurant.” This more intimate concept seems natural now because of her very personal relationship with Seattle. “I made so many friends [here], that I would walk into Shanik and my staff would have to try to drag me away the tables. I can’t go to a table and not talk for 15 minutes.”

With the personal community she has grown here, the chef will miss many things. Foremost is the tight, nurturing relationship among Shanik’s diverse staff (Indian and Ethiopian cooks, and a mainly Caucasian front of the house) who have mostly been with the restaurant since the beginning.

Another is the “amazing female chef-owner scene” in this city. In Seattle, Dhalwala has reveled in the camaraderie of chefs like Maria Hines (Golden Beetle, Tilth) and Tamara Murphy (Terra Plata) who are “generous and not about ego and care about the same things I care about—immigrant populations, climate change” and more. “I felt like a pig in mud,” she says.

Concerning these larger topics, one of the things Dhalwala has enjoyed most at Shanik in the last six months has been hosting conversations with nonprofits and other organizations in the lounge area about what she considers important local work for the environment and more. She conducts similar forums at the University of British Columbia Farm, especially around feeding the world sustainably, and is proposing more talks there.

As for our city, though, she doubts we’ve seen the last of her. “I have loved my two and a half years here and I kind of feel like I belong in Seattle,” Dhalwala says. At present she looks forward to staying involved with Tom Douglas’ cooking school and watching what else develops. “I think there is room for me and my cuisine here; right now I’m just waiting to see how it continues naturally for me in Seattle.”

Seattle can and will grieve the loss of Shanik on our culinary landscape, but Dhalwala says she’ll move on deeply filled and with much learning from the experience. “Minus the money, it was really great,” she says, and even the restaurant’s namesake, Dhalwala’s daughter Shanik, told her she doesn’t regret her mother naming the eatery after her because, “you’re so happy you did it.”

“I feel way more confident than I did two and a half years ago,” Dhalwala says, and in particular doesn’t want Shanik closing to deter other women from opening businesses. “I should be taken as an example of why you should because even if it doesn’t work, it can be great.”

And what about those spice-encrusted lamb popsicles, different from Vij’s, that she created special for our city? “I’m keeping them as my Seattle popsicles; I’m not ready to give them up to Vancouver. That’s how personal this is to me,” Dhalwala says.

Get to Shanik before March 21 to have the popsicles, the roasted, ground cricket paranta and other Shanik delicacies one more time.