Smoking Hot Barbecue Restaurants In and Around Seattle

With summer grills ablazing, it’s time to get your barbecue on 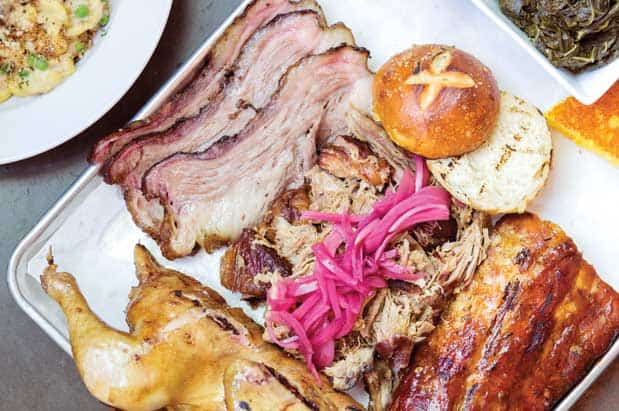 BALLARD
Bitterroot
It might not look like a traditional barbecue joint, but that’s because it isn’t. The Ballard Avenue–facing dining room is tight but bright and inviting. With a mix of clean, modern, white and metal tables and food served on rustic aluminum trays, the scene is set for what the restaurant calls “Northwest barbecue” a hybrid of Texas- and Kansas City–style barbecue flavors. Bitterroot’s fare, served in large portions, has a sweeter touch and incorporates indigenous applewood to its smoked meats. Standouts include smoked half chicken ($15) and house-made hot links ($12), casings and all. The restaurant is both family-friendly (the generously portioned mac and cheese, $12, with mixed-in pulled pork can feed all the kids and provide sides for grown-ups, too!) and set up for late-night diners. A happy hour (3–6 p.m. weekdays, 11 p.m.–1 a.m. every day) essential: Draper Valley hot wings ($5), brined, smoked, fried to order and tossed in emulsified buffalo butter sauce. 5239 Ballard Ave. NW; 206.588.1577; bitterrootbbq.com

BOTHELL
Carolina Smoke BBQ
Barbecue aficionados are often faced with a multitude of flavorful choices, and Carolina Smoke doesn’t make things any easier. To offset any indecision, this brightly lit North Carolina–style smokehouse in the Country Village shopping strip offers plenty of outdoor seating along with a platter made up of your choice of four meats and two sides ($19). We suggest the wings (hot buffalo style), tri tip or hot links. For sides, try the jalapeño cornbread and broccoli slaw, made from crunchy shaved broccoli stems. An extra $1.50 gets you one of Carolina Smoke’s “premium sides,” such as smoked mac and cheese—a small indulgence worth the price. The moderately upscale, tastefully decorated dining room is comfortable and boasts plenty of room for families. Lots of dark wood tables and a big booth in the back, which can fit a half dozen people, fill out the space. 23806 Bothell-Everett Highway; 425.949.8672; carolinasmoke.com

CENTRAL DISTRICT
The Barbeque Pit
Flames on the windows, flames on the marquee, and hot Outkast and Al Green tunes blaring from speakers create the fiery ambiance here. This is classic Southern barbecue, but with an urban edge. Pictures of athletes and musical legends (Muhammad Ali, Billie Holiday, Jimi Hendrix) adorn the walls of this cash-only Southern-style eatery. It’s the sort of place that neighborhood folk pop into for carry-out orders of spicy pulled pork sandwiches ($6.50), giant slabs of ribs slathered in tangy sauce ($24.50) and a slice of delectable sweet potato pie ($2.50), served up by the affable owner behind the counter, who is affectionately known as Pookie (real name: Edward Whitfield). Each dinner order ($13.50) comes with two sides, so try the sweet baked beans or the steamed and dripping, pork-infused collard greens. They’re light and supremely satisfying. 2509 E Cherry St.; 206.724.0005; Facebook, “The Barbeque Pit Seattle”

R&L Home of Good Bar-B-Que
Part restaurant, part neighborhood hangout, this classic barbecue kitchen—established in 1952—was reportedly visited by Martin Luther King Jr. on his one trip to Seattle. Order at the counter (cash only), admire the faded 1980s-era Pepsi vending machine and have a seat in one of the well-worn booths of this time-capsule hideaway. It’s the type of place where folks go to fill their bellies after sports practices on the weekend. R&L has knockout good sides, from perfectly cooked red beans and rice and the satisfying black-eyed peas (both $4.50) to the lip-smackingly sweet peach cobbler ($4/serving) for dessert. For entrées, you have your choice of Southern, Louisiana-style baby back ribs (served mild, medium or hot) literally painted with sauce ($19), moist slow-cooked sliced beef ($17), or the mysterious “scraps and thangs,” a mixture of whatever’s left over that day, usually pork ($10), all priced by the pound. This place has stood the test of time. 1816 E Yesler Way; 206.322.0271; Facebook, “R&L Home of Good BBQ”

FREMONT
Bourbon and Bones
Located in that nebulous area between Fremont and Ballard called Frelard, this 1-and-a-half-year-old barbecue restaurant, opened by Michael Law, formerly of The Wandering Goose, is fast becoming one of the most well-known spots for North Carolina–style ribs and brisket. The first thing you notice is the gleaming hot case full of just cooked ribs, mashed potatoes and fried chicken at the entrance of this dark, night-club-esque bar and restaurant. The second thing you notice, of course, is your mouth watering. The restaurant sends up signals from its smoker just outside, blanketing the neighborhood with tantalizing aromas, like a cartoon smoke finger waving you in. The “sweet heat ribs” (quarter pound $9, half pound $16) have a hint of spice and are perfect if you don’t like meat falling off the bone. Everything here is brought up a notch: The brisket (quarter pound $7, half pound $12) is smoked for 18 hours with hickory and applewood; the mac and cheese ($6/$11) is made with creamy Asiago and sharp white cheddar; and the juicy, buttery Carolina fried chicken (purchased by the piece) serves as a wonderful canvas for the hot sauce. Each plate is served with two sides, house-made pickles and white bread. 4350 Leary Way NW; 206.582.2241; bourbonandbones.com

Drunky’s Two Shoe BBQ
With its rusted handsaws on the doors and mechanical-horse kiddie ride (25 cents per ride) at the entrance, Drunky’s Two Shoe BBQ on Leary Way looks as if a Wizard of Oz twister dropped it into the neighborhood. Opened in April by Nate Rezac, who also owns Fremont’s 9 Million in Unmarked Bills, Drunky serves food is as unpretentious as the decor. Jump into its Texas-style, tomato-based sauces, especially the pulled pork sandwich, served with coleslaw on a soft bun, or indulge in the succulent beef brisket (both, $9.95). Another delicious option is the bursting-at-the-seams hot links. To wake up your palate, dip a bite in Drunky’s super-hot and tangy “Doom Sauce.” Perhaps most surprising on the menu, though, are the robust and satisfying salads: pulled pork chop chop ($9), smoked trout with tarragon dressing ($8) and smoked chicken Caesar ($7). This is a place where you can kick your boots clean and dream you’re in the honest-to-goodness Wild West. Also, look for the goats near the patio, which, according to the staff, were there before Drunky’s moved in. 4105 Leary Way NW; 206.693.3962; twoshoebbq.com

GEORGETOWN
Jack’s BBQ
With an all-black exterior and dozens of strung lights crisscrossing the space inside, this restaurant is barbecue chic. Located a stone’s throw from CenturyLink and Safeco fields, the Central Texas–style hall serves its meat dry-rubbed and toothsome. Owner Jack Timmons is a former Microsoftie and Texas native who passionately threw himself into the barbecue world. To start, order the Frito pie ($7)—Texas-style chili (a less soupy, drier, meaty version)—over Fritos in the bag. It’s tough to resist the savory buttermilk hushpuppies, served with finger-lickingly delicious tartar sauce ($5), different from the more prevalent, sweeter styles. Your next course in this large, family-style eatery should include the mac and cheese ($4), dripping with Tillamook cheddar and infused with tomato and smoked pepper. Jack’s chorizo-like hot links (they’re spicy and a touch crumbly) are a highlight and only outdone by the signature beef brisket: a tender, thinly cut, well-seasoned star on the menu. Mix them all together on a platter with The Texas Trinity (brisket, ribs and sausage combo) for $25 and top it all off with one of Jack’s excellent signature cocktails, such as the Smoked Old Fashioned or the Lone Star Rose (both $10) for a touch of nightlife to complement the down-home delicacies. 3924 Airport Way S; 206.467.4038; jacksbbq.com

SODO
Pecos Pit
If variety is the spice of life, you’re in luck here. Big picnic tables flank this walk-up-window barbecue joint tucked snuggly into the sprawling SoDo neighborhood, where a large selection of slow-cooked meats is sure to please any barbecue-loving palate. Choices include Southern-style shredded or sliced beef brisket, shredded pork, sliced barbecue chicken, hot links or turkey breast (on Fridays) served as a deliciously sloppy sandwich ($7.85), salad ($8.15), or topping a steaming smoked russet ($9.45) or smoked sweet potato ($9.85). It’s a midday affair only; Pecos is open 10:30 a.m.–4 p.m. weekdays, often with a long line of hungry, blue-jeans-wearing diners during lunch hours. The ambiance is decidedly Southern, lending to the feeling that Tim McGraw might come around the corner strumming his guitar as you wash your meal down with Pecos’ chilled iced tea or lemonade. 2260 First Ave. S; 206.623.0629; pecospitbarbeque.com 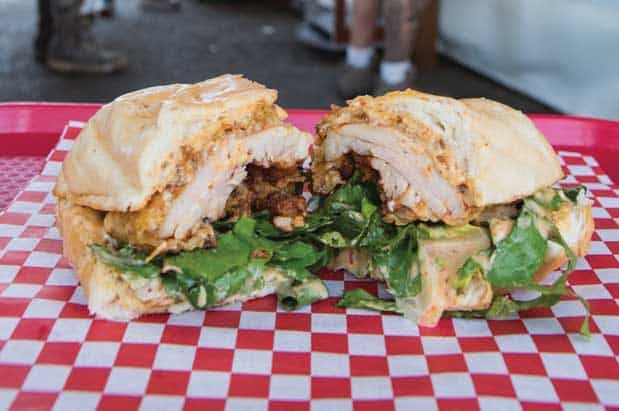 The smoked fried chicken sandwich at Pinky’s Kitchen
This food truck turned covered wagon on 45th Street in Wallingford makes an impression, as does the grub. The Australian-born founder of this eatery, who boasts that his menu will not conform to any single tradition, prides himself on his sauces—and rightly so. There are about a half dozen, ranging in flavors, both distinct and delicious, all created by head chef Andrew Bray. Try Pinky’s deep, rich Sweet Caroline sauce or the pineapple habañero, which pleasantly hits you in the nose with sweet, vinegary heat. (Sauces are also available by the bottle.) Try the smoked fried chicken sandwich ($5.50–$9.50, depending on size), which is double-batter-dipped and topped with lettuce and house-made cherry bomb pepper aioli (fried shoestring onions, 50 cents extra). The ribs are glorious, too: fall-off-the-bone tasty. Pinky’s is open late: From Sunday through Thursday, you can pick up food or dine at the counter seats from 11 a.m. to 11 p.m.; and on Friday and Saturday, it’s open until midnight. 211 NE 45th St.; 424.324.7250; pinkyskitchen.com

RoRo BBQ & Grill
Perhaps the most quintessential barbecue shack in the city, RoRo is a small, unassuming roadhouse-style spot situated on Stone Way, with maybe 25 seats in the entire place. Brightly lit and welcoming to “cowgirls” and “cowboys” (as labeled on the restroom doors), the establishment offers 14 different sandwiches, from pulled chicken to grilled tri tip (each $11.99). One of the sneaky-good menu items is the turkey club ($12.99), a smoke-forward, jaw-dropping (partly, because it’s so big!) option. The sandwich is best paired with RoRo’s thick and creamy house mac and cheese ($2.75), made with mild cheddar cheese, black pepper and a hint of cayenne, and washed down with sweet mint lemonade. Another “must” menu item is the portobello sundae ($10.99): smoked mushrooms cut into brisket-like slices sautéed with red peppers and layered with sides such as succotash and potato salad—all served sans bun, in a glass goblet. 3620 Stone Way N; 206.954.1100; rorobbqseattle.com