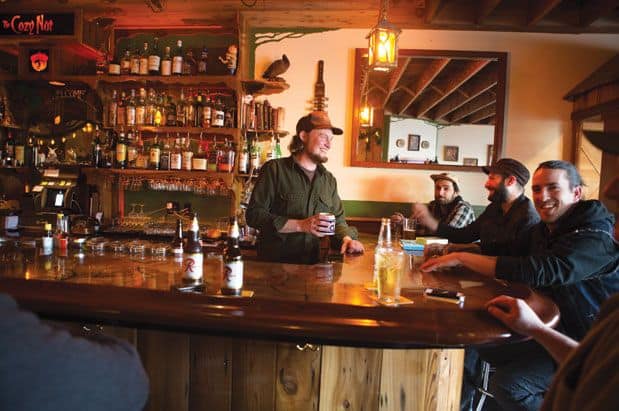 This article originally appeared in the May 2015 issue of Seattle Magazine.

Squirreled away near the intersection of 85th Street and Greenwood Avenue, The Cozy Nut (123 N 85th St.; 206.784.2240) has an English village pub atmosphere and hosts a crowd of regulars from the neighborhood.

But be warned: The first thing you’ll see when you enter is a large glass diorama with a big horned sheep’s head (stuffed, of course!) overlooking a forest scene of taxidermy squirrels tipping back airline-issue bottles of booze around a toy fire. It actually fits the fun and woodsy spot, which has many fixtures made out of reclaimed cedar from a Duvall barn.

The seasonally rotating cocktail list boasts new mixes alongside lively classic variations. For example, on a recent visit, I enjoyed The Salty Nut, a fizzy slant on a Salty Dog, with Campari and soda added to traditional vodka and fresh grapefruit juice ($8). The Blackberry Bootlegger ($9) was another favorite, with a burst of fresh blackberries and orange bitters in a traditional old fashioned. There’s a dandy U.K.-leaning beer selection, too, including eight on tap as well as 15 can and bottle varieties nestled in a lovely wooden fridge.

The food menu isn’t extensive, but is broken out in a handy manner. There’s an à la carte section with individual items from $1 to $4 (the highlights: a rich, chunky house-made hummus, $2; and duck rillettes, $4), plus a few entrées and some grand platters that serve two to four. The veggie ($12) version features dolmas, hummus, peppercorn pecorino cheese, roasted tomatoes with paprika, olives, nuts and cornichons.

Opened by Taryn Roy, her husband, woodworker Sam Weyer, his brother Jacob Weyer and friend Andrew Mitchell, all of whom have a range of past experience (including various positions at Bimbo’s, Cha Cha, Jai Thai and others), the bar is a handcrafted family affair, from a bar topped with slices of telephone pole to the brass lamps. And while Mitchell takes the lead on the cocktail menu, and Roy focuses on the food, they all pitch in. And you can be sure that when you sit down, one of them will be there to bring you a small bowl of spiced corn nuts.