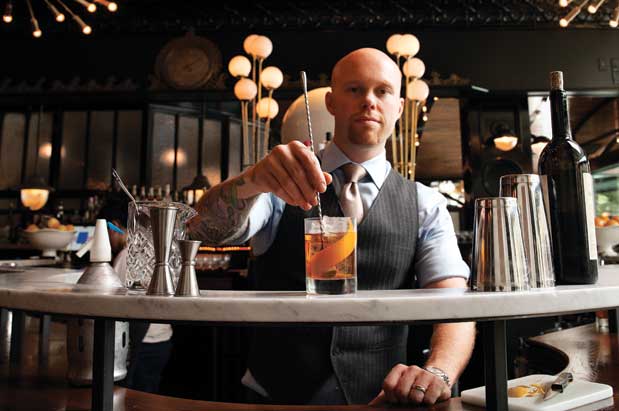 !–paging_filter–pAfter learning his trade in San Francisco favorites such as Scala’s Bistro and others, Erik Carlson moved back to his hometown of Seattle in 2008 to open the bar at Ballard’s Moshi Moshi. He soon garnered a reputation for crafting intriguing and delicious drinks. In 2011, he became bar manager at Ballard’s French outpost, Bastille. Since then, he’s taken over as bar operations manager for the raft of swell spots in the growing group of restaurants owned by James Weimann and Deming Maclise, including a href=”http://www.seattlemag.com/bastille-cafe-bar” target=”_blank”Bastille/a, a href=”http://www.seattlemag.com/poquitos” target=”_blank”Poquitos/a, Macleod’s Scottish Pub, a href=”http://www.seattlemag.com/article/bocce-meets-bavaria-von-trapps” target=”_blank”Von Trapp’s/a and most recently, a href=”http://www.seattlemag.com/stoneburner” target=”_blank”Stoneburner/a. You’d think it would be tough to keep the creativity high with such a wide swath of places, but Carlson’s drink menus are always top-notch. He draws on his experience of knowing how various flavors work together, and runs new drinks by a wide testing panel, including other bartenders and chefs at the bars. He works hard to make sure “each bar is looked at as a completely new and separate concept.” Because of this, he says, “you will never see the same drink on two different menus at any time.” While he enjoys all the bars he manages, he’s pretty attached to Stoneburner. He was “able to have input on the actual build-out,” he says, “to make sure it was my dream bar to work behind for functionality and execution.”/p