Shannon Borg visits a few of the most innovative members of the new guard in Washington vineyards.

This article originally appeared in the October 2012 issue of Seattle Magazine. 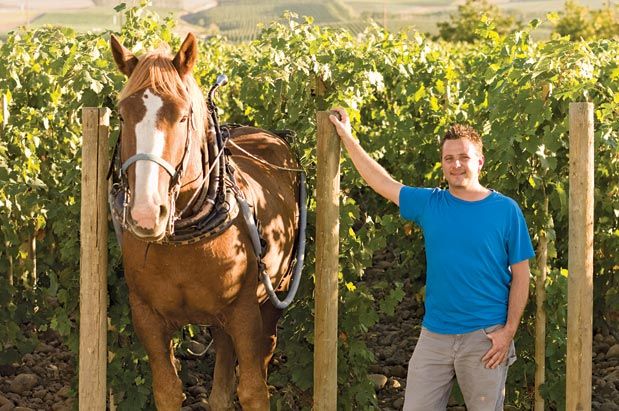 The Washington wine story is just beginning to be told. After 30 years of experimentation and steady growth, the last decade has brought growth that has been nothing short of exponential. Wineries now number more than 740, up from 101 in 1997. But where do all those wineries get their grapes? In past months, we’ve highlighted the grand dames of vineyards, dating back to 1917 (Upland Vineyards) and 1957 (Otis Vineyard), and the 20- and 30-something vineyards, such as Boushey and Champoux vineyards, showing the foundation laid by dedicated pioneers of Washington wine. But over the past 15 years, many more winegrowers have thrown their hats into the ring; there were 43,000 acres planted last year, up from 17,000 acres planted in 1997. There are too many “new kids on the block” whose vines are now coming of age, to mention here, but highlighting a few shows the incredible range of viticultural philosophies and practices now at play in our state.

To mention a few heavy hitters, The Benches vineyard (formerly Wallula Vineyards), part of a unique site on the steep, benched banks of the Columbia River Gorge, was planted in 1997, and awarded Seattle magazine’s Vineyard of the Year in 2010. Other newer vineyards range from the Evergreen Vineyards in the Ancient Lakes area (known for fabulous Riesling), started in 1995, to StoneTree Vineyard on the Wahluke Slope and Stillwater Creek Vineyard in Royal Slope, both planted in 2000 and known for producing great Cabernet Sauvignon; to the smaller Les Collines Vineyard in Walla Walla, planted in 2001 and churning out fascinating Syrah.

Many of the newcomers are planted using accepted “best practices” of viticulture for the spacing of vines, in-depth analysis of soil type and more. But a few of these “youngsters” are taking experimentation—and tradition—even further.

One of the state’s most noted vineyards, Cayuse, planted in Walla Walla in 1997, is pushing into new (and old) territory with its plantings. Cayuse’s vigneron (the French term for a winemaker who grows his own grapes), Christophe Baron, had a life-changing experience when he saw the stony fields that would become his vineyards, likening them to great old vineyards he’d seen in the Châteauneuf-du-Pape area of southern Rhône in France that produced amazing Syrah. He proceeded to plant vines closer together than usually done in Washington, replicating these French vineyards. His latest planting, in the 3 x 3 Vineyard, has the highest density of vines per square foot (4,840 vines per acre) in the state—perhaps in North America—based on the concept that, when the vines must vie for nutrients, the fruit becomes more intense and reflects the characteristics of this place more fully. Baron also farms using biodynamic practices, which are based on ancient concepts of planting and harvesting in rhythm with the moon cycles. He uses special preparations, such as nettle and chamomile, which are infused in water and used as soil amendments, and generally goes “beyond organic” in his treatment of his land. The result has been Cayuse’s hard-to-find, cult-status wines that have gained the respect of the country’s best wine critics.

Another, even newer vineyard that harks back to Old World practices is the Force Majeure Vineyards on Red Mountain (which started as Grand Rêve, but changed its name). Vineyard manager Ryan Johnson and business partner Paul McBride have planted a vineyard that is one part laboratory, one part viticultural history museum. On the experimental side, they planted a selection of the great varieties of the world, each chosen, through obsessive analysis, to best match one of nine different soil types found in the vineyard. Each “micro block”—some as small as a quarter-acre—not only has a different variety and clone of that variety, but also a different trellising method and irrigation. For instance, the Syrah vineyard blocks are planted in the traditional Old World “gobelet” style, with one straight center vine, where leaves and grapes grown in a round bunch like a goblet. Several of the blocks are planted with three or four vines per 4 and a half feet, much closer than most New World plantings. And because the area is so steep—these are the first plantings on the upper slopes of Red Mountain—much of the work on these very New World vineyards must be done in the ancient tradition, by hand, earning two of the blocks the names “El Terror” and “The Devil’s Playground.”

While the past 30 years in Washington wine history was about finding out which grapes would grow well in which region, the past 10 have welcomed an influx of passionate grape growers, who are fine-tuning Old World practices and getting micro with the terroir. As the newer vineyards mature, and experimentation with new varieties, planting methods and soil-building techniques become general practice, it will be exciting to see how the wines of Washington benefit from the wisdom of the pioneers and the enthusiasm of the newcomers, all interested in the same thing: making great wine.

The latest in a series of collaborations between vineyard manager Ryan Johnson and Syncline winemaker James Mantone, this classic “GSM” Rhône-style blend made with Grenache (28 percent), Syrah (24 percent) and Mourvèdre (48 percent), has depth, spice and body, along with bright red fruit aromas and flavors of plum and pomegranate. Pairs with: Grilled lamb chops with Asian spices.

Chris Gorman, winemaker/owner of Gorman Winery, collaborated with vineyard manager Ryan Johnson on this Grenache (90 percent) and Syrah (10 percent) blend, aged in 100 percent new French oak. Consistent with Gorman’s style, this wine is bold, but expressive of Red Mountain fruit, with floral, black raspberry and cherry aromas. A lush mouthfeel and rich texture make this a great example of the power of Red Mountain fruit. Pairs with: Beef tenderloin with red wine demi-glace.

Cayuse 2008 Cailloux Vineyard Syrah, Walla Walla Valley ($75)
Classic Syrah components of floral, mineral and game aromas, with intense red and black cherry, pepper and anise, this wine is meant to show the vineyard’s beautiful fruit. A tiny bit of Viognier (4 percent) is added, which lifts the floral and fruit notes of the Syrah, and adds softness. Pairs with: Roasted duck breast with black cherry demi-glace.