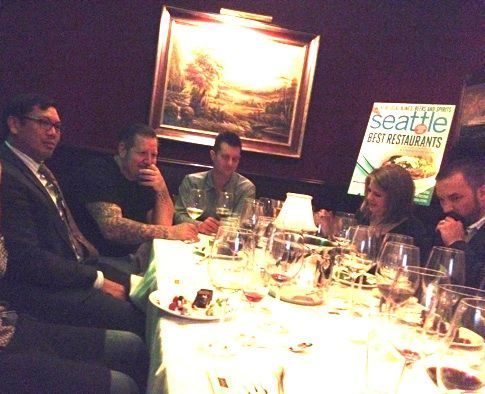 OK, there was no smoke. That would be illegal and/or generally frowned upon.

But for the newest installment of Seattle magazine’s Salon Dinner Series, we did find ourselves in a cozy private dining room near the back of the Capital Grille, a classic downtown steakhouse.

Our hope for these dinners is that Seattle mag can bring together bright minds and influential leaders from within particular communities or industries for candid and inspiring discussion.

Ulterior motives? Only one: while our guests loosen up over good food or a glass of wine, we get to know them and their passions a little better.

As myself and other Seattle mag staffers (including editorial director Rachel Hart, associate publisher Lisa Fazio and wine writer Shannon Borg) arrived at the restaurant, a few of our guests were already gathered in the bar, catching up over draught beer and ribbing each other over accolades given out earlier that day at the 2012 Washington Wine Restaurant Awards.

Winemakers drinking beer. This would not be the first surprise of the evening.

The impression I got after four courses of good food—and a full flight of wine: serious wine people are not the stuffed-shirts presented in some cheesy “Escape to wine country!” visitor guides.

Washington wine people, at least, are a bit like loveable, old cowhands. They boast sun-warmed skin, deep smile lines and an easygoing nature—and, of course, they are wickedly knowledgeable about all things dirt, water and fruit.

The winemakers we met last night—including Brian Carter (Brian Carter Cellars), Brennon Leighton (Efeste) and Chris Sparkman (Sparkman Cellars)—all have compelling stories to tell about the Washington landscape, about its unique gifts and its particular challenges. Better yet, they all know each other well, so it’s entertaining to listen to them speak candidly and trade friendly barbs across a table.

Though we were eating delicious filet mignon in a swank restaurant, the vibe felt more like you’d encounter at a back porch BBQ with old friends.

Even Nelson Daquip, sommelier at iconic Seattle restaurant Canlis, as refined and gracious as you would expect him to be, projected ease at our raucous table. Having just received the honor of “Sommelier of the Year” earlier in the day at the aforementioned awards ceremony, he was offered up a bout of loud applause upon entering the room—and then later playfully teased for the powerful influence he has over the industry.

Leighton uncorked and poured his own bottle of Efeste’s 2009 Big Papa Cabernet, which he brought with him to the restaurant in a tote bag (never mind that we all had four glasses of wine in front of us already). Winemaker Bart Fawbush (Bartholemew Winery, based in the old Rainier Brewery) admitted he had once served this same wine to his own “Papa” because he liked it so much. Not to be outdone by Leighton, Morgan Lee (Covington Cellars) opened two bottles: a Petite Syrah and a Zinfandel. Our lovely servers distributed spill buckets and we all started dumping and recycling our glasses to get as many tastes as possible.

Conversation flowed as easily as the wine: Robert Mondavi was referred to (and revered) on a first-name basis; lighter glass bottles were lauded not only because they’re better for the environment, but because a lighter case of wine is easier on the back. We talked advertising, marketing, education, food; debated the weather at volumes slightly louder than normal; and later, when I explained I was from Texas, Sparkman proudly threw a foot up on a chair to show off his Lucchese boots (the ultimate, authentic Texan cowboy boot).

I want to tell you more…but suffice it to say: what happens “in the back room” at a Seattle mag salon dinner stays there.

What I can share, however, are a few insights our group discussion illuminated:

Sometimes their territory overlaps and they fight—but it comes across in the spirit of friendly competition. They help each other find fruit during difficult years. They brag about each other’s wines when they genuinely like them. They agree that promoting Washington Wine over their individual varietals is paramount – because if the region isn’t recognized as a hot spot for wine, their jobs will only be harder.

The “David vs. Goliath” parable doesn’t seem to play out here. Without the path finding St. Michelle has done for Washington in and beyond the region, our guests generally acknowledged, their wineries probably wouldn’t be in business. Also, Chateau St Michelle makes more Riesling than any other producer in the world! So continue to feel good about your St. Michelle collection (but explore the boutique varietals when you can!).

3. A new director is coming to the Washington State Wine Commission

Chris Stone, deputy director of the Commission, told us there’s a new sheriff in town: executive director Steve Warner. With strong business savvy and a knack for listening, Warner seems to have convinced those who have met him that he will bring important leadership to the region. One salon guest asserted, “[If he] shows me the wall, I’ll run through it.”

That means we’re exporting more of our “homemade” wine than we are consuming ourselves. How does that make sense in a community that is smitten with the “locavore” food movement?

For the smaller wineries, distribution is a quandary, one that SoDo-based wine retailer Paul Zitarelli’s business model (Full Pull Wines) is founded on. Starting off writing a wine blog for fun, he ran up against one question repeatedly among his readers: “This wine is great, but where can I get it?” The best answer he found was to start selling the wine himself. Business is going well he says, but as far as widespread support of boutique wineries, he said it best when he said to the table at our salon dinner: “There are hearts and minds to be won.”

Look for dispatches from future Salon Dinners all around the city. We plan to take many more opportunities to gather outspoken leaders and passionate voices for an intimate discussion about what’s happening right now in their respective industries, fields and communities.

“No one knows how much cows influence our wine.”

This post has been edited slightly since its original publication.