Where Chefs Go to Eat When Visiting Seattle 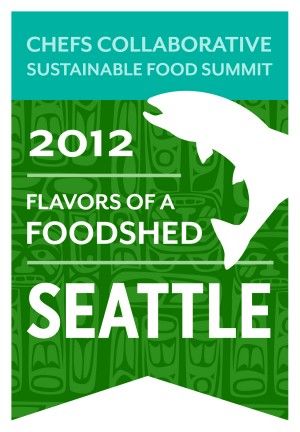 A bunch of amazingly talented chefs from around the country have convened in Seattle this week, and while there were plenty of meaty discussions and panels and tastings at the Chef’s Collaborative Sustainable Food Summit, the burning question many asked was, “Where are you going to eat?”

The universal answer seemed to be: There’s not nearly enough time to try everything on everybody’s must-try, can’t-miss list.

This annual meeting of like minds explores topics such as “Do chefs have a responsibility to advocate for a more sustainable food system?” (a panel that included Tom Douglas, Greg Atkinson and Piper Davis of Grand Central Baking, moderated by New York Times reporter Kim Severson) and “How to Manage the Cost of Sourcing Quality, Sustainable Ingredients” (which featured Maria Hines and Andrea Reusing of Lantern in Chapel Hill, S.C.), as well as demos on butchering goat, lamb and beautiful salmon from Bruce Gore Fisheries. Chef Chris Keff from Flying Fish made filleting those pretty fish look so easy! (Watch highlights from the conference via Chefs Collaborative’s Facebook page.)

While the group of about 350 chefs, purveyors and farmers/ranchers/fisher folk were well fed throughout the day – kudos to the student volunteers cooking lunch at the Seattle Culinary Academy, shining the spotlight on locally grown, gorgeous produce and to the lineup of Seattle chefs cooking at the post-program reception (Kevin Davis of Blueacre, Mark Fuller from Ma’Ono Fried Chicken and Whisky, Wayne Johnson from Ray’s Boathouse, Thierry Rautaureau from Rover’s and Luc, and Steven Ariel from Trace did the city proud with a stunning lineup of seafood snacks.)

This organization has been around for 20 years and Seattle being a host city is a really big deal, especially because it gives a whole bunch of serious tastemakers a chance to sample what we do best.

If you check in on the Twitter hashtag for the event (#natlsum12),  you will find visiting chefs gushing about Serious Pie, Quinn’s and the pumpkin ale from Pike Brewing. While standing in line for lunch, more Monday dinner options were chewed on: Madison Park Conservatory, Shiro’s, Rione XIII, Matt’s in The Market, Etta’s, Palace Kitchen, Lechoso, Terra Plata and more were mentioned.

Cochon chef Stephen Stryjewski from New Orleans made a beeline for Walrus; Mike Lata, the chef at FIG in Charleston, S.C., hit Sitka & Spruce and Carpenter and Miller Union’s Steven Satterfield, who is from Atlanta, was thinking about sushi until somebody insisted that he should head to Revel instead. Or, maybe in addition to. These pros know how to squeeze a whole lot of eating into one or two days.

Overhearing food-savvy folks making meal plans reminded me yet again how damn lucky we are to live here.

The program at Tuesday’s Summit continues with short talks designed to educate and inspire. I’m going to go hear author Paul Greenberg speak about why every chef should care about Bristol Bay salmon and Pebble Mine, and hope to catch the tail end of Seattle chef and author Becky Selengut revealing some juicy details about her culinary fiascoes.

An awards lunch follows, with honors going to Rick and Lora Lea Misterly from Quilisascutt Cheese and Farm School of the Domestic Arts, as well as Kären Jurgensen, chef-instructor at Seattle Culinary Academy, who is also the driving force in the kitchen for the summer programs at the Misterlys’ Farm School of the Domestic Arts. (You can read about their mission in Chefs on the Farm, a book co-authored by Seattle Mag’s Shannon Borg.) Congrats to the winners.

And so long to the chefs! It sure was fun having all you enthusiastic eaters in Seattle! Come back soon.