Why the Monorail is Still the Best Ride in Town

The monorail's had its ups and downs, but some locals still love this retro rail rider. 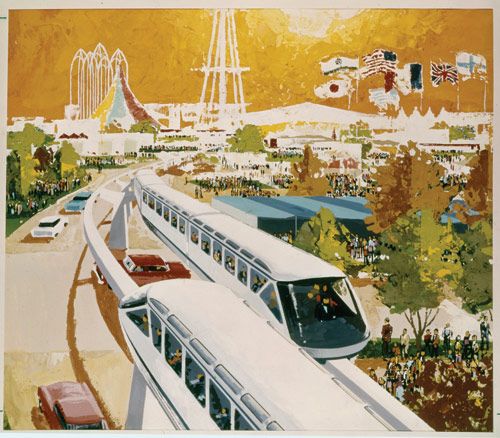 This article originally appeared in the March 2012 issue of Seattle Magazine.

Is there any form of transportation in the Northwest more bizarrely storied than the monorail? In a region famous for infamous means of travel—the barrel-rolling Boeing jet, Galloping Gertie crumbling into the Tacoma Narrows, the zombie ferryboat Kalakala emerging from the mist again and again, unidentified flying objects first called “flying saucers” near Mount Rainier in 1947—the 50-year-old monorail remains a simultaneous, if somewhat incongruous, nod to the past and the future.

Along with the Space Needle and the Pacific Science Center, the Alweg Monorail remains one of the most unchanged, most identifiable and most continuously operating artifacts from the Century 21 World’s Fair. Like a low-altitude landmark, it clatters overhead through Belltown daily, and its pylons are an unofficial slalom course for drivers on Fifth Avenue.

Originally envisioned as a demonstration of futuristic technology as well as a practical means of connecting Seattle’s retail core and hotel district with the Century 21 fairgrounds, the monorail’s twin red and blue trains have survived crashes, fires and even politics to become something of a critical, if quirky, link between downtown and Seattle Center.

As Knute Berger pointed out in an interview last year, boarding the monorail at the old Westlake station back in 1962 meant that the World’s Fair experience began right there, a mile from the Space Needle and other iconic attractions. The exciting ride made Century 21 unlike any other world’s fair before or since, and signaled that the fortunes of downtown and the fairgrounds were inextricably linked.

And that’s partly why it was a relief to many when the effort to build a modern version between Ballard and West Seattle collapsed a few years ago. Since construction of the new system would have required that the old monorail be dismantled, several meetings to discuss disposition of the old trains were held with Museum of History & Industry (MOHAI) staff and officials from the short-lived Seattle Monorail Authority. I was there in my then-capacity as deputy director of MOHAI, and while it pained me to think of the original monorail coming down, I relished the possibility of taking possession of the red train, on which scenes from It Happened at the World’s Fair were filmed with Elvis Presley.

But, at the same time that officials were looking to mothball the monorail, an unofficial scheme emerged to move the entire system—concrete columns, track and both trains—someplace else, maybe to the suburbs. I was at a few of those meetings, too, and thought it was a kooky—yet somehow plucky—idea. But the scheme evaporated when it was derailed by a sobering finance package.

And now, 50 years after it first whisked people back and forth, the monorail endures. While downtown has expanded and evolved, and Seattle Center has stumbled yet somehow survived, the monorail just keeps doing what it does: going back and forth, day after day. As many times as monorail trains have crashed into the station, collided with each other or simply caught fire, the City of Seattle and the monorail operators have brought the system back to life again, and, theoretically, made it safer for the next time.

Meanwhile, the passengers just keep coming back, since the monorail is still the most efficient way to get from downtown to the Seattle Center. Best of all, distinctive monorail rituals have endured. Just watch the next time you’re at Westlake or Seattle Center on the platform, as the doors open and families with young kids pile in and jockey to get the front window seat on the train, right next to the driver. It’s still the best ride in the city.