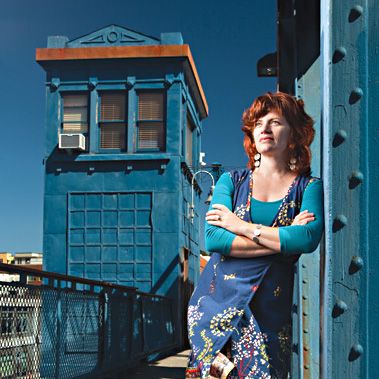 “As an artist, I’m really not used to all this attention,” says Kristen T. Ramirez, climbing the stairs to her temporary studio in the northeastern tower of the Fremont Bridge. The 38-year-old Ballard-based artist is referring to the tremendous amount of press her summer residency in the tower has received. “It’s making it hard to actually do any art.” But, she admits, it’s a pretty nice problem for an artist to have.

This isn’t the first taste of success for the flame-haired, easygoing Ramirez, who moved to Seattle from her native San Francisco in 2002 to pursue an MFA in printmaking at the University of Washington. Over the past five years, she has had numerous shows in local galleries, been selected by the city for public art installations, and secured instructor roles at both Cornish College and Pratt Fine Arts Center. But ever since the Office of Arts & Cultural Affairs chose her as the inaugural artist-in-residence at the Fremont Bridge, her profile has reached new heights.

Looking out at the 360-degree view from the tower (previously empty), Ramirez answers the most common question first: No, she does not sleep in the tower (and no, there’s no bathroom). During her three-month stay, which ended in late August, she spent 15–20 hours per week inside, working toward her final project—a temporary public artwork based on her experience at the bridge (to be presented on or around 9/12). As part of that project, she collected input from locals about their relationship with the bridge, in the form of a Fremont Bridge quiz she devised and a voicemail line where people could leave memories and historical tidbits about the bridge.

Ramirez hopes to mix these narratives with the sounds audible from the tower—the boats honking and the bridge operator signaling, the mechanics of the structure’s opening and closing, the birdsong, the voices of earbud-wearing cyclists singing out loud as they cross the bridge—into a sound collage. Her grand plan involves making this soundscape available via cell phone to people waiting for the the bridge—so that instead of feeling irritated, they’ll be learning more about what the bridge means to Seattleites.

Though it might seem odd that a visual artist is focusing on sound, the theme fits seamlessly with Ramirez’s previous work, which has an emphasis on place. Her print pieces portray urban landscapes via bold, collaged, pop-art-influenced graphics. Text plays a big part in her work, as does the barrage of billboards, signage and ads we’re exposed to in daily life. “I’m amazed by the amount of visual clutter we have to negotiate,” she says. But rather than criticize the clutter, her work celebrates it with bright yellow-red-orange images, streetlamps sprouting like flowers and, sometimes, substituted bits of what she’d prefer to be seeing (instead of ads, blues lyrics).

Her first post-bridge project, which will show at Capitol Hill’s Grey Gallery this fall, is centered on a “ghosts of commerce” concept, for which she is creating three-dimensional structures representing old West Coast buildings being used in a different way than originally intended. “I like the idea of repurposed spaces,” says Ramirez, sitting in the artist studio formerly known as the bridge tower. A boat blares its request to pass, prompting an additional thought about these new pieces: “They’ll have to have sound, too.”