We tried the pie and the drinks Pie Bar's Ballard outpost. Here's what we thought 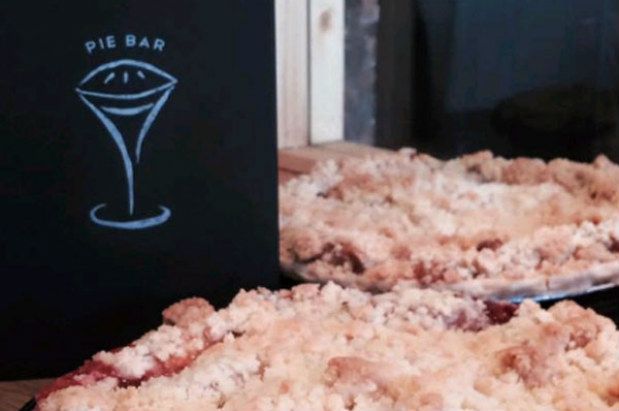 Pie Bar’s Ballard outpost opened a few months back, in March (the original location is on Capitol Hill, and has been around for a few years if you haven’t yet visited) and it has taken up a swell spot right on Market Street in the former Great Harvest Bread space. It’s run by Natalie Stroeve and her sister Alyssa Lewis. We recently stopped in to try the pie – and the cocktails.

Here are our three impressions of Pie Bar Ballard:

The Drinks: You’ll find a solid selection of drink choices, including some twisted classics (like the Root Beer Old Fashioned, with bourbon, Art In The Age Root liqueur, sugar and bitters) and some actual classics (you’ll see a lot of Moscow Mules in traditional copper mugs, for example). But I feel that if you’re in a bar devoted to pie, it’s the sweet drinks that need to be the tops – and it’s hard to find a decent sweet drink, really, as bartenders usually frown on them. And while the dessert drink selection here is lacking in naming originality, it’s certainly rich in choices. The finest I tasted was the Key Lime Pietini (see what I mean about the names), with Licor 43, key lime juice and cream. It was tangy and smooth and delicious all at once.

The Space: Though situated in downtown Ballard, the wooden tables, and brick and wooden walls, give it a little ski lodge feel (the fire playing on the TV also added to that effect). It’s a long and lean space, too, but well laid out and cozy. The spacious marble-topped bar is worth sitting at, if you’re just passing by for a slice and a cocktail solo, but for larger groups grab on of the tables and extra forks for all.

The Pies: There were eight sweet pies, and three savory pies on the menu when I was in, and I think that’s the basic plan. While normally I’d sing the crust’s praises, here it was the filling that really stood out.

Of the pies tasted (and it’s best to go with a few so you can share and taste a couple), my favorite was the Boozy Nut Pie – a slice runs you $9, but comes with a heaping scoop of vanilla ice cream. It was a rich pecan pie in the time-honored sense, accented by dark chocolate and a nice bourbon essence. If bourbon isn’t in every traditional pecan pie, it should be. It’s good enough that you might want a second slice, but filling enough that I’ll bet only serious eaters could have two. You can order a full pie, too, but you’ll need to let them know a day in advance. Oh, also, there’s a window to the sidewalk where you can pick up a slice. Sadly, you can’t get cocktails from the window!