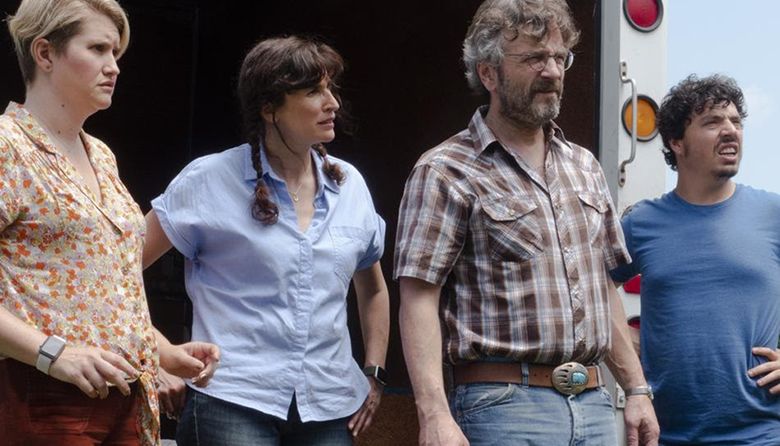 Our city’s annual film extravaganza (May 16‒June 9) gets underway today, and it can be daunting to try to figure out which of the more than 400 films in this year’s Seattle International Film Festival you should try to see.

But thanks to Seattle magazine’s arts and events writer, Gavin Borchert, we’ve got the inside scoop. In his spare time, Borchert—for the third year—works with the Festival’s publications team, responsible for its free guide and the catalog. As such, he gets a better sneak preview of the Festival’s offerings than just about anyone except the programmers themselves. Here are his top five suggestions for films he’s already seen (and you should too), and the five he’s most eager to check out.

Enamorada
In this 1946 classic, the two biggest stars of the Golden Age of Mexican cinema, Maria Felix and Pedro Armendariz, play a high-born landowner’s daughter and a low-born revolutionary who clash, and eventually fall for each other, during the Mexican Revolution. Felix, barely known in America (she never made a picture in Hollywood), smolders, sizzles, sears and kicks butt.
6:30 p.m., Monday, June 3, SIFF Cinema Uptown

Patrinell: The Total Experience
The career of Seattle music legend Patrinell Wright—who founded the Total Experience Gospel Choir, toured it around the world, and retired it last October—is recounted against the backdrop of Seattle’s unpleasant racial history and the gentrification of the Central District, Wright’s home base.
4 p.m., Sunday, May 26, SIFF Cinema Egyptian
3 p.m., Monday, May 27, SIFF Cinema Uptown

Sune vs. Sune
Sort of the Swedish equivalent of the “Diary of a Wimpy Kid” series, the character of schoolboy Sune has been a multimedia favorite in Sweden for 35 years. In this sharp family comedy, the first day of fourth grade brings on an existential crisis—a popular new kid with his same name and designs on his girlfriend.
1 p.m., Saturday, May 18, Majestic Bay
11 a.m., Sunday, May 26, Pacific Place
1 p.m., Saturday, June 1, Kirkland Performance Center

HONORABLE MENTION: The Apollo, One Two Three, What She Said: The Art of Pauline Kael

Between the Lines
In 1977, a struggling Boston alt-weekly tries to avoid takeover, and blandification, by a media conglomerate. So what else is new?
6:30 p.m. Tuesday, May 21, SIFF Cinema Uptown

I Am Cuba
Assigned by the Soviet Union to make a movie glorifying its new comrade Cuba, director Mikhail Kalatozov visited in 1964 to tell four stories of the common people’s struggle against rapacious capitalism—and he went off the rails with his camera technique, resulting in one of the most stunningly shot films ever, moving beyond propaganda into poetry. Ignored for decades, I Am Cuba appears in a ravishing new restoration.
6:30 p.m. Tuesday, June 4, SIFF Cinema Egyptian

Sonja – The White Swan
For a few years in the ’30s, Norwegian figure-skating champ Sonja Henie was the highest-paid “actress” in the world, salchowing her way into the hearts of movie audiences everywhere (especially in Nazi Germany). Onscreen, she made Shirley Temple look louche; offscreen she was a shrieking nightmare. This camp biopic chronicles her rise and fall.
4:15 p.m., Tuesday, May 21, SIFF Cinema Uptown
6:30 p.m. Wednesday, May 22, Majestic Bay
8:15 p.m. Monday, May 27, Lincoln Square

Storm in My Heart
Susan Hayward and Lena Horne: two grand and gorgeous Hollywood stars, born, coincidentally, on the exact same day in Brooklyn. But they grew up to enjoy very different careers; perhaps you can guess why? This innovative doc runs two of their musicals, With a Song in My Heart and Stormy Weather, simultaneously, side by side on a split screen, adding running commentary that explores the industry’s unsavory treatment of race.
1 p.m., Sunday, May 19, SIFF Cinema Uptown
9 p.m., Tuesday, May 28, SIFF Cinema Uptown

Sword of Trust
To open the Festival on Thursday, May 16, SIFF’s presenting the latest from hometown hero Lynn Shelton: her satire about a Civil War antique that unlocks a comic conspiracy theory. Shelton and actor Marc Maron are scheduled to attend.
7 p.m., Thursday, May 16, McCaw Hall. $75.