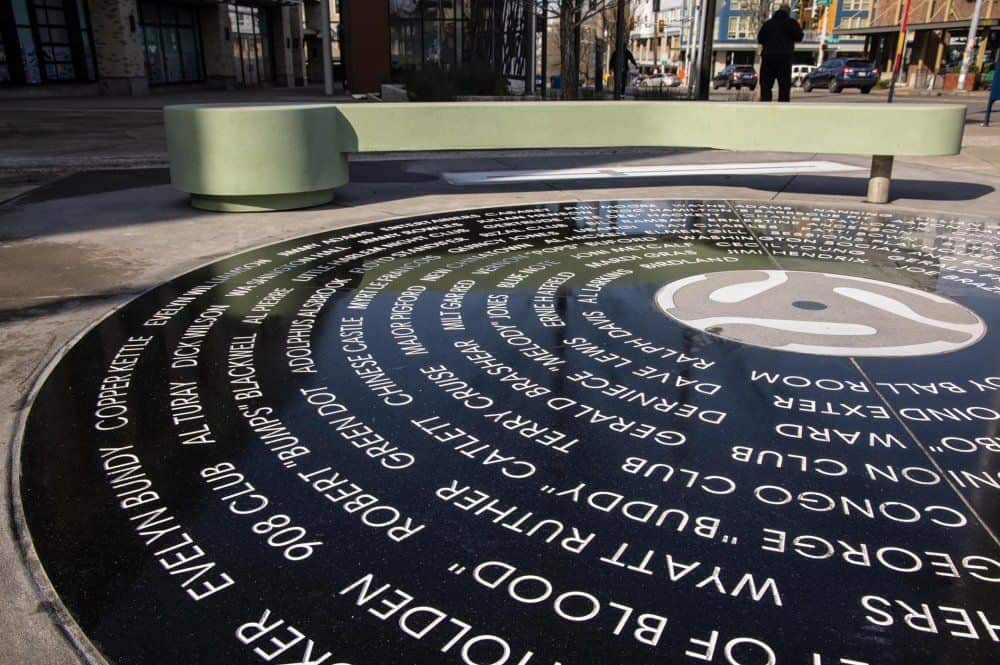 Vulcan engaged art consultants and neighborhood advocates Vivian Phillips and Leilani Lewis to curate the experience and commissioned more than a dozen Black artists, many of whom were born, raised, and still live in the Central area, to create the artwork, which will be permanently displayed throughout the apartment complex.

One piece, pictured above, is a life-size 78 rpm record made of concrete, granite and steel that celebrates the once-thriving Seattle jazz era. Artist Paul Rucker, a musician and multimedia artist who has lived on Jackson Street since 1998, did extensive research on the city’s jazz history before designing the piece. Visitors can sit on a bench-like arm and recall the names of famous musicians and venues along the record’s spiral.

According to HistoryLink.org, the jazz scene was “grounded in the speakeasy culture of the 1920s and nurtured by the wartime boom of the 1940s,” noting that Jackson Street was home to numerous nightclubs and dance halls.

Photos of each piece and interviews with the artists who created them are chronicled in a virtual art walk: artwalkjacksonseattle.com.

When I was 28 years old, I was diagnosed with a late-stage cancer and given a prognosis of “three months at best.” At the time, my wife was eight-and-a-half months pregnant with our only child. Not wanting to terrify her with the news, I chose instead to take the train from New York City to…