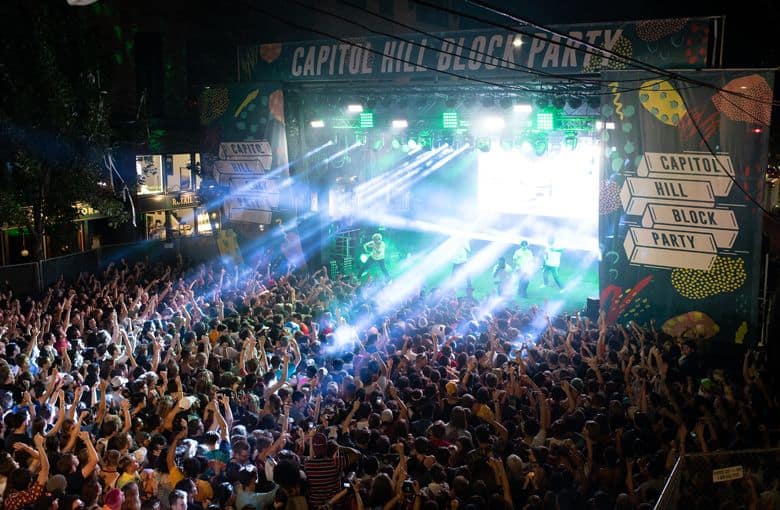 Capitol Hill Block Party
(7/19-7/21) This anticipated neighborhood soirée might be a bit bigger than mom and dad expected. Capitol Hill Block Party (CHBP) spans the weekend with live music on six stages, featuring artists such as Lizzo, Big Wild, Peach Pit, Mitski, RL Grime, Golden Record and dozens more. Since the shows run by the hour, you can stop into local bars and restaurants to fuel up between your favorite acts, then meander through art shows and retail shops. CHBP is one of the last independently owned festivals of its size in the country, so come support local hangs and nonprofits that are partnering up and matching donations until $5K is collectively reached. Times and prices vary. Capitol Hill, 1122 E Pike St.; capitolhillblockparty.com

Ali Wong: The Milk and Money Tour
(7/18-7/21) Comedian-writer-actress Ali Wong is presenting The Milk and Money Tour with an almost completely sold out show, so goers clearly know they’re in for more than an obligatory chuckle. Tickets are selling fast, but Friday and Saturday still have limited open seats—perhaps an excuse to take yourself out for that overdue solo date, which you deserve, of course. So get your tickets soon and raincheck on Netflix! Times and prices vary. Paramount Theatre, downtown, 911 Pine St.; 206.682.1414; stgpresents.org

Music Under the Stars
(Through 7/26) If you forgot to buy a ticket to one of Seattle Chamber Music Society’s Summer Festival concerts, fret no further—there will be an audio-only broadcast for locals to enjoy in five Seattle-area parks. Bring a friend, a picnic and blanket and lounge on green lawns while listening to the orchestra’s melodic tunes through dusk until the stars come to light. Before the broadcast and during intermission, local student musicians will perform for the crowd. 7:30 p.m. Free. Locations vary. 206.283.8710; seattlechambermusic.org

Shapes of Native Nonfiction
(7/22) The basket—whose function determines its materials and shape—is the guiding metaphor in this just-released collection of essays by native writers. Drop in on this roundtable with editors Elissa Washuta and Theresa Warburton and contributors Ruby Murray and Laura Da’. 7 p.m. Free. Seattle Central Library, downtown, 1000 Fourth Ave.; 206.386.4636

MUST GO TO THE MOVIES

Comedy Gold from the American Cinema
(Through 8/15) The six screwball comedies, dating from 1934 to 1943, in the Seattle Art Museum’s film series are children of the Depression and World War II eras: They gave the audience an escape from those grim times. Audiences flocked to these airy fantasies about romance, high society and martinis. Included in the lineup are the first two of the “Thin Man” series, in which William Powell and Myrna Loy play upper-crust crime solvers, and Mr. & Mrs. Smith, Hitchcock’s only American comedy. 7:30 p.m. $9 ($47–$52/series). Seattle Art Museum, downtown, 1300 First Ave.; 206.654.3210

The Last World Octopus Wrestling Champion
(Through 7/28) There’s a big, otherworldly secret the title character in The Last World Octopus Wrestling Champion is hiding—find out what it is and let playwright Justin Huertas’ latest fantasy musical wrap you up. It weaves mythology, adventure, and coming-of-age queer love and the talented cast perform double and triple duty as narrators, sprits and humans lending their singing voices to an unusual—yet very human—story about relationships of all kinds. Prices vary. Times vary. ArtsWest, West Seattle, 4711 California Ave. SW; 206.938.0339

Bite of Seattle
(7/19-7/21) The Albert Lee Appliance Bite of Seattle is a food and beverage extravaganza with more than 200 vendors, outdoor craft beer gardens and plentiful cider tastings to sip while listening to 70+ live bands—or just your favorites, at least. The night is bound to be prime with a BBQ competition and free movie night, so stop by to show off your skills at the cook-off battles while your kiddos stay occupied with play structures and games in the family fun zone. Times and prices vary. Seattle Center, Lower Queen Anne, 305 Harrison St.; 425.295.3262; biteofseattle.com

Ragin’ Viet-Cajun
(7/20) Seafood lovers, rejoice! Pho Bac Sup Shop and Crawfish King are teaming up to bring you a Viet-Cajun feast for the ages. Presented by Friends of Little Saigon, this cross-cultural fest celebrates food and community, so roll up your sleeves and get ready to dive into seafood boils, Cajun pho and more. Plus, enjoy live DJs while sipping brews in the beer garden—and if you’re feeling brave, take a chance on karaoke. Proceeds from this event will benefit the Little Saigon creative space, a community and arts space promoting the celebration of Vietnamese identity and culture. 12 p.m.- 12 a.m. Prices vary. Pho Bac Sup Shop, International District, 1240 S Jackson St.; flsseattle.org