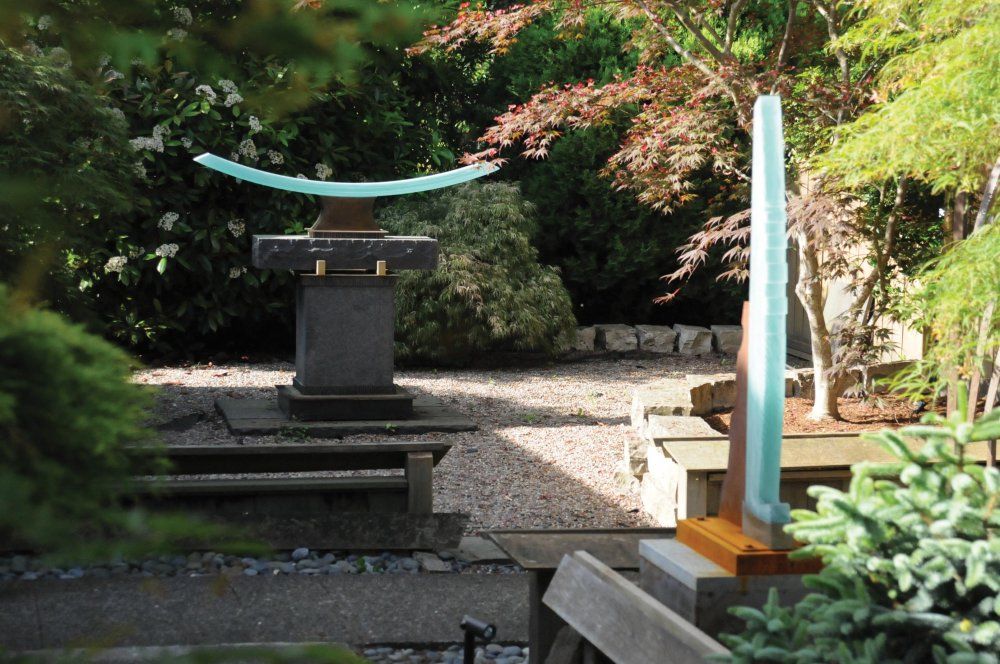 Having just returned from a kayaking vacation, Ingrid Lahti was already feeling a bit rubbery when she walked in the door of her home on Sept. 11, 2001.

She learned of the attack on the Twin Towers from a voice mail left by her brother, a former ﬁreﬁghter. Like much of America, the Mercer Island artist spent the rest of the day watching grim replays on television.

In April of 2002, Community Partners of Bellevue solicited proposals for a memorial to erect in conjunction with the one-year anniversary of the attack. Lahti won the competition. She wanted in part to honor her parents, who were grateful immigrants from Finland.

“My father always talked about his great love for this country, which embraced him and gave him many opportunities,” she says.

Lahti, with the help of perhaps of 100 businesses and volunteers, devoted the next six months of her life to her vision of the towers. Two 15-foot-tall, 30-inch-wide aluminum frames were outﬁtted with horizontal rows of dog tags — which look like windows at a distance — imprinted with the names of the victims.

“It was a wonderful time, that time between when we were attacked by terrorists and when (President George W.) Bush attacked Afghani-stan. People were coming together, and there was so much love,” Lahti recalls.

The haunting installation, rooted in the pond at Bellevue’s Downtown Park, was ready for public viewing by Sept. 7, 2002. At the time it was Seattle’s most prominent homage to 9/11.

Bellevue Parks Department whisked the memorial away in the winter of 2002 because it uses the park as a skating rink. Lahti didn’t get it back for a decade and now, as the 20-year anniversary of the attack approaches, “9/11 Memorial” is now used to store wood in her yard. She hopes to restore and display it again.

On Sept. 10, 2001, Dennis Evans worked late into the night on a newly arrived bulldozer, happily busting sod for a garden on a lot adjoining his northeast Seattle home.

Evans, a painter, and his wife, Nancy Mee, a sculptor, were devastated the next morning. They told their studio assistants that they could go home with pay, but nobody wanted to be alone. They all watched the news of the attacks unfold.

“Finally, Dennis slapped both hands on his knees and said, ‘Enough of the violence! Let’s go start something beautiful today,’” Mee recalls. Thus begat “Garden of Souls,” which shaped up handsomely over the next few months, and a year later was dedicated “to the memories and in honor of the fallen,” Mee says.

Evans is the gardener in the family. His energy for pushing dirt approximates that of the gopher in “Caddyshack” and includes the planting of 49 “Thundercloud” ﬂowering plum trees. His stunning garden rooms, bejeweled with Mee’s soaring sculp-tures, attract buzzing horticulturalists and art patrons from throughout the region.

In this self-declared ﬁefdom of “Uto-pian Heights,” parking strips have been reimagined, including benches that invite passersby to rest their backside, but not their cortex. Carefully crafted rock designs are a feast for the eyes, and inlaid bronze plaques oﬀer bons mots such as, “Trust in God, but tie up your camel ﬁrst.”

The goal is to engage the neighborhood and bring people closer together. The gardens have hosted numerous weddings and anniversaries.

Mee and Evans have been improving Utopian Heights since 1976, when they purchased a circa 1932 bungalow that had been abandoned in the wake of the Boeing collapse. They bought the house at a HUD auction, despite a long shopping list of grievances from the city code department and the fact that the structure was occupied by canines.

They married in 1980 and together, even as their reputation as artists has grown nationally and internationally, they’ve added thousands of square feet of beautiful living and studio space. With the exception of some framing, they’ve done it all themselves, including window construction.

The garden is not advertised or public, but they aren’t the type to shoo away a neighbor or a wilted soul.

An 80-year-old woman recently stopped Mee on the street. “She said, ‘You’re Nancy, aren’t you? I just wanted to tell you that 20 years ago, I was going through a very diﬃcult time, and I meditated in your garden. Your garden healed me.’”

Evans popped his head out the back door one day to ﬁnd a woman in surgical scrubs sitting in the garden.

A Shinto shrine attracts about 1,000 unsolicited messages every six months. They are gathered and burned in a ceremony on the equinoxes.

“It’s incredible what people pray and wish and hope and laugh and cry for,” Mee says.

Gretchen Campoux isn’t an artist. She’s a therapist who owns Seattle-based Garden + Soul. She says the 20-year anniversary of 9/11 may carry many of the same emotions sparked by the Covid-19 crisis. She is convinced that what people want most after a stressful event is peace, calm and a sense of safety.

Champoux doesn’t prescribe gardening in her therapy, but notes that science increasingly supports the idea that gardens like the one created by Mee and Evans boost mental health and signiﬁcantly reduce stress and anxiety. She gardens for her own wellness and also operates Sacred Spaces Design, which specializes in container gardens.

You don’t have to be an accomplished artist to create a sacred garden space, Champoux says. “All you need is a place where you feel safe, feel grounded and feel joy.”