The Barrel Thief Shines in Fremont

This article originally appeared in the March 2015 issue of Seattle Magazine. 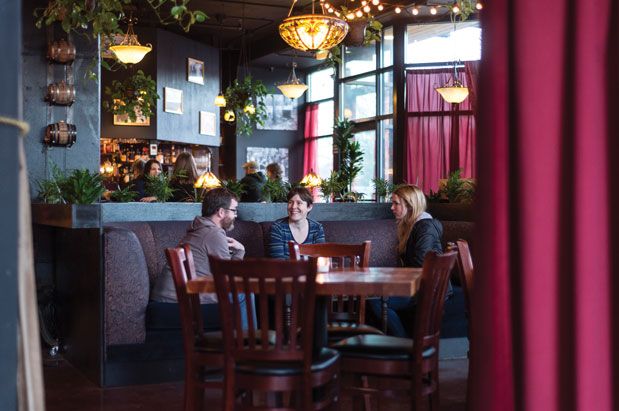 With a name like The Barrel Thief (3417 Evanston Ave. N, No. 102; 206.402.5492), it’s no surprise the drink menu at this Fremont bar features a short list of trendy barrel-aged cocktails, with some creative takes on the genre (see: the light and surprisingly dry Sobremesa, featuring mezcal, bourbon, house cacao liqueur and orange liqueur, and house-made cacao bitters; $10). But also grabbing our attention were nine unaged, seasonally rotating house cocktails along with volumes of other offerings. When I stopped in last, I swooned over The Dean Martin ($13), a lovely bitter-and-whiskey mix of local Westland Distillery’s flagship American single malt whiskey, Vya sweet vermouth, walnut liqueur, those house cacao bitters (which are for sale at the bar for $10, along with chocolates and other bar merchandise) and amaro nonino. The cocktail program is run by bar manager Nicholas Utke (formerly of Hattie’s Hat), who also makes many of the tinctures, bitters and liqueurs.

The creative drinking options don’t stop at cocktails; there are also beer and cider choices, and more than 150 wines available by the glass ($8 and up). When I was there, the wine included some overseas dreams, such as the beautifully berry-driven Castello di Ama Chianti Classico ($16), alongside in-state favorite Two Vintners Grenache Blanc ($16), a refreshing sipper with floral and lemon accents. The bar also stocks more than 100 whiskeys. Try a flight—I suggest the Area 206 bourbon flight of local stars: 2bar, Batch 206, Oola and Tatoosh (half-ounce pours, $15). There’s a short food menu, too, offering pizzas, appetizers and small plates that rotate seasonally.

Opened by Christopher Gronbeck as the Wine Tea Chocolate shop in 2012 and converted to a wine and whiskey bar in 2013, the space has an eclectic decor, with tall bar tables, red booths and flowing curtains that call to mind The Arabian Nights, and long, low café tables crafted from 100-year-old reclaimed fir. A green aesthetic underlies it all, which makes sense as Gronbeck also owns Sustainable By Design, a green building and renewable energy consulting firm. The end result is a hospitable spot for people of all sorts: couples on dates, groups of friends taking part in bar events, such as tango lessons, or Fremonters seeking a creative twist.