A tour through Washington’s most scenic destination breweries

This article originally appeared in the October 2014 issue of Seattle Magazine. 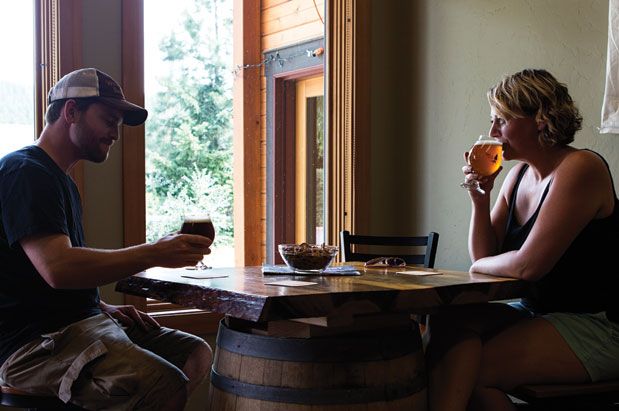 IN THE CASCADES:
Located on the main drag in Roslyn, the tiny town located just a few miles from Suncadia Resort, Wild Earth Brewing Company invites you to visit its intimate beer-only tasting room, where thirsty locals and beer tourists vie for barstools or a seat at one of just three tables. Sip a pint of Tamarack pale ale, Wild Earth’s flagship beer, gaze out the tall, wood-framed windows at the surrounding ridgelines, and imagine yourself as a character in the television series Northern Exposure (filmed in Roslyn in ’90s). Open Fri.–Sun. 21 and older only. Roslyn, 200 N First St.; 509.649.2466; wildearthbrewing.com

Include a stop in Leavenworth and join someone else’s party at one of the large, shareable tables on the patio in front of Icicle Brewing Company—or slip inside and cozy up to the bar in the tasting room, which overlooks the brewery’s towering stainless steel fermentation tanks. Hops lovers enjoy the Bootjack IPA, while those looking for something lighter appreciate the Crosscut pilsner. The food menu is limited but delicious, offering sandwiches and snacks made using local products. Open daily. All ages welcome before 10 p.m. Leavenworth, 935 Front St.; 509.548.2739; iciclebrewing.com

IN LAKE CHELAN:
With brightly painted walls and cozy booths, the hip little pizza joint Local Myth Pizza serves salads, thin-crust pizza and good beer in a casual, kid-friendly scene. While the Margherita Myth pizza is legendary (consider adding prosciutto), don’t be afraid to skip the pie and order beer only; many locals gravitate to Local Myth for brews. With nine taps pouring a rotating selection of Northwest beers, you’re certain to find something satisfying, but be sure to try the Alpine Märzen from Alpine Brewing Company, the only beer that’s always in the lineup. Chelan, 122 S Emerson St.; 509.682.2914; localmythpizza.com IN YAKIMA VALLEY:
There is something enchanting about drinking beer in the middle of a hops field, and that’s exactly what you’ll do at Bale Breaker Brewing Company, where the children of one of Yakima’s hops-farming families constructed a brewery and beer-only tasting room in 2013. In addition to a taproom and bar, there is plenty of room on the patio to enjoy a sunny afternoon and a pint of Field 41 pale ale, named for the surrounding field, where Bale Breaker grows Cascade hops. The hops grow tall by the first of July and are ready for harvest at the end of August. Open Tue.–Sun. Kids welcome. Yakima, 1801 Birchfield Road; 509.424.4000; balebreaker.com The large, lodge-like building conjures thoughts of a ski vacation, which is odd, because Snipes Mountain Brewing restaurant and brewery is located in the heart of the Yakima Valley in the gritty, work-a-day town of Sunnyside. The mountain lodge theme continues inside, where the dining room features an enormous rock wall and fireplace. Order one of the regular offerings, such as Coyote Moon brown ale, or ask for one of head brewer Chad Roberts’ fresh-hops ales—made with freshly harvested hops from the nearby fields—of which he plans to brew several versions this year (available starting in mid-September). Open daily. All ages welcome. Sunnyside, 905 Yakima Valley Highway; 509.837.2739; snipesmountain.com

Don’t expect anything too fancy at the no-frills Prosser brewery and eatery Whitstran Brewing; basic burgers, fries and sandwiches accompany a broad selection of beers crafted by brewmaster Larry Barbus. You’ll usually find at least seven or eight different creations on tap at Whitstran, so the sampler tray is perfect for sharing. Order a Steamy Cream California common ale, a light and refreshing beer that is a hybrid of two styles—cream ale and a steam beer, each noted for its effervescent quality. It goes down smooth on a hot afternoon, especially when sitting on one of Whitstran Brewing’s two patios. Open daily. Kids welcome. Prosser, 1427 Wine Country Road; 509.786.4922; whitstranbrewing.com

A few blocks away, in historic downtown Prosser, Horse Heaven Hills Brewery offers a tasting room if you’re looking for a beer-only experience, but don’t miss Horse Heaven Saloon, which is just a half-block up the alley from the brewery. The same people who run the brewery opened Horse Heaven saloon in 2013. Along with a full complement of Horse Heaven Hills beers, Western-themed murals painted on every wall and top-shelf cocktails reminiscent of the swankiest Capitol Hill nightspot, the saloon’s food menu features inspired renditions of pub grub devised by chef Laurie Kennedy (formerly of Wine O’Clock Wine Bar and Bistro). The menu is seasonal, as are many of the beers, but you cannot go wrong if you order a pint of Mustang Red along with the slow-braised brisket hoagie, which is the saloon’s version of a Philly cheese steak and is made with its own beer-cheese sauce. Open Tue.–Sun. All ages welcome. Prosser, Horse Heaven Hills Brewery, 1118 Meade Ave., 509.781.6400; Horse Heaven Saloon, 615 Sixth St., 509.781.6228; horse-heavensaloon.com

IN RED MOUNTAIN:
Located just outside Richland, east of Red Mountain, in a seemingly out-of-place business park along a desolate stretch of State Route 240, the tasting room at white bluffs brewing (Richland, 2000 Logston Blvd., No. 127; 509.554.7059; whitebluffsbrewing.com) has a most notable quality of exceptional beer, which is generally unobtainable anywhere else, and that’s what makes this a beer destination worthy of a slight detour along your wine trail. The sizable beer catalog is longer than the sandwich-focused food menu. Reach for any of the French farmhouse-style ales, such as the Biere De Mars. Open Mon.–Sat. Grown-ups only (21 and older). For you history buffs, the Manhattan Project B Reactor Tour headquarters is next door.

IN WALLA WALLA:
Burwood Brewing opened in June and is surrounded by wineries amidst the Walla Walla Wine Incubators near the airport, a group of five adjacent buildings constructed to house small, boutique wineries (and now, one brewery). Burwood feels very familiar to wine tourists and is practically indistinguishable from a winery tasting room, except for the beer-garden-esque seating, where people share communal tables and enjoy full pints of Burwood’s Walsch, a crisp and refreshing beer that pairs perfectly with a warm Walla Walla afternoon. Take note: Sipping, spitting and dumping are frowned upon at this all-ages tasting room. Open Wed.–Sun. Walla Walla, 602 Piper Ave.; 509.876.6220; burwoodbrewing.com

Just southwest of Walla Walla, on the Oregon side of the border, Dragon’s Gate Brewing serves up small-batch beers on a 10-acre farm (also home to some stunning Friesian horses). The brewery and tasting room occupy an outbuilding, surrounded by an inviting patio, complete with Adirondack chairs and farmland views, where you’re invited to enjoy a particularly tasty IPA. Trust your GPS and don’t fear one-lane, unmarked roads; this is definitely a rural address. Open most Saturdays, 1–5 p.m. (check Facebook, “Dragon’s Gate Brewery”). Kids welcome on the patio but not in the brewery or tasting room. Milton-Freewater, Oregon, 52288 Sunquist Road; 541.215.2622; dragonsgatebrewery.com Burwood Brewing in Walla Walla, where tastes (below) come in their own carrying case

ALONG THE GORGE:
Double Mountain Brewery’s taproom doubles as the town’s collective living room, where locals gather to share highly coveted couch space, salads, “New Haven–style” pizzas and an array of great beers. Expect a large and energetic crowd on nights with live music. Hops lovers will want to bathe in the Molten Lava Double IPA (seasonal), while those seeking something less bitter often reach for the Tahoma Kriek (Belgian-style sour cherry ale). Bring something to entertain the kids because there’s usually a wait, but one that’s well worth it. Hood River, Oregon, 8 Fourth St.; 541.387.0042; doublemountainbrewery.com

Located across the street from Hood River Waterfront Park, Pfriem Family Brewers (pronounced freem) has an atmosphere that is best described as Pacific Northwest meets Belgium. The beers, as well as the sleek, modern-meets-rustic décor, remind you of a Belgian beer hall, while through the window you watch windsurfers bouncing on the Columbia River’s waves. Imagine you’re in Brussels as you enjoy an award-winning Belgian strong dark ale along with the mussels and frites, or embrace the spirit of the Northwest by pairing an IPA with the Mt. Shadow cheeseburger, made with local, grass-fed beef and white cheddar. As the name suggests, the entire family is welcome. Open daily. Hood River, Oregon, 707 Portland Ave., Suite 101; 541.321.0490; pfriembeer.com

One of the Northwest’s oldest and largest craft breweries, Full Sail Brewing co. sits perched above the Columbia River in a sprawling industrial complex in downtown Hood River. At the heart of this venerable beer factory, the Full Sail Brew Pub is surrounded by towering stainless steel fermentation tanks and buzzing brewing equipment. Along with typical pub grub, enjoy a broader selection of Full Sail beers than you knew existed, and be sure to sign up for a brewery tour, which is conducted every day on the hour from 1 to 4 p.m. Kids are welcome but must be at least 12 years old for the brewery tour. Hood River, Oregon, 506 Columbia St.; 541.386.2247; fullsailbrewing.com

Not far from Hood River, on the Washington side of the Gorge, across the Hood River Bridge, the tiny town of White Salmon overlooks the river and is home to everybody’s brewing, an all-ages brewpub offering a majestic view of Mount Hood. There is plenty of beer to entertain your palate, but the costar of this show is the hamburger with Muenster cheese. Be brave, order it “XXX style,” with pickles and peanut butter, and wash it down with something light and refreshing like the Local Lager, or be really bold and chase your burger with a Big Brother Imperial IPA, which unleashes a beautiful barrage of hop bitterness in your mouth. White Salmon, Washington, 151 E Jewett Blvd.; 509.637.2774; everybodysbrewing.com

About 20 miles from Hood River on the Washington side of the Columbia River, Acadian Farms & Brewery sits on a hill on the western edge of the little town of Carson. This is a real farm that sells organic produce at local farmers’ markets. Ask for the Saison, a traditional farmhouse-style ale, which is the perfect libation for this exceptionally bucolic beer-drinking experience, and feel your blood pressure drop as the nearby sheep and chickens serenade you. Kids love farms, so bring them along. Open Fri.–Sun. Carson, Washington, 342 Carson Creek Road; 509.427.4297; acadianorganics.com