‘Last Call’ Asks Bartenders What They Want as Their Final Drink 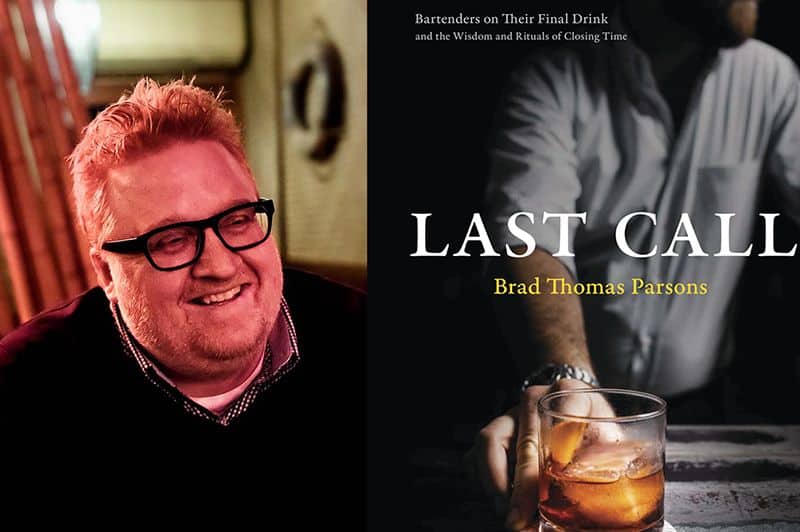 While he left Seattle ten years ago for NYC, I still think of author Brad Parsons as a crucial part of the development of Seattle’s drink and food soul. A longtime cookbook editor for Amazon, he wrote his first, now legendary, book Bitters here, and was a friendly face at many bars when the cocktail renaissance was kicking off. Since leaving, he’s written two more books that should be on any respectable bar shelf (the bella Italian-inspired Amaro, and the purrfectly charming Distillery Cats), and has a fourth, Last Call, about to be released—and it may be the best of the bunch. He’ll be at Book Larder Wednesday, October 23 at 6:30 p.m. in conversation with local author Paul Clark, another libation-driven literary light, and then hosting a cocktail party at Willmott’s Ghost on Thursday, October 24 from 7:30 to 9:30 p.m.

All lovers of good bars, good drinks and good conversation won’t want to miss the events and won’t want to miss Last Call. In it, Parsons travels to bars around the country, asking bartenders, “What is the last thing you’d want to drink before you die?” and surrounding their answers with bar narratives, closing time rituals and recipes. But the premise unfolds past that short description like one of those nights out you never forget—it bubbles over as the stories become a look not just into bars and drinks, but a tipsy treatise around what makes bar culture so important, our modern bar landscape’s diversity, and life itself.

How did Parsons decide on such an intriguing topic? The idea came deep in the night, when, as he tells me, “I opened an email draft and called it LAST CALL. Those two words have such weight, promise, and possibility, but are also cloaked in an element of darkness—whether you’re talking about the end of someone’s night, or mortality itself.” To get to the heart of his subject, Parsons traveled the country visiting many spots with photographer Ed Anderson, who has more than 300 lovely shots in the book, and who Parsons has been working with since Bitters.

Those personal visits are how the book feels so alive, even with its subject. “It was vital to actually visit all of the featured bars in person,” says Parsons. “We usually had to hit multiple bars in one day in each city, so we’d spend the mornings and afternoons in the bars doing interview and taking the bartender’s portrait, and then come back at night and embed ourselves in the bar with just a handheld camera.”

The bars range from neighborhood and dockside dives to top shelf spots and everywhere in between—Seattle is well represented, including Rob Roy, Dino’s Tomato Pie and Canlis. For the latter, head barman James MacWilliams Last Call drink would be, surprisingly, a margarita and beer. Why? The story, like so many other honest and touching tales, is shaken and strained in Last Call—as is MacWilliams’ margarita and Almost Perfect Cocktail recipes.

Parsons says, “For me, most of those drinks are really about the stories behind them. Whether it’s a Miller High Life and a glass of rye or a martini whose spec is in tribute to the way the bartender’s father used to drink it.” And while individualized martinis may show more than any other drink, the libation variety is vast as the bar types—there’s even a nonalcoholic choice, from Damon Boelte, of Brooklyn’s Grand Army, who picked a glass of Lipton iced tea. Parsons said, “he no longer consumes caffeine so if this was indeed his final drink, he’d want one last jolt, though he’s not against spiking it with a splash of Benedictine.”

Like a memorable bar and a memorable night, with a tone that’s somehow elegiac, convivial, and a party, you’ll remember Last Call and the drinks and stories inside a long, long time. And, they’re also accompanied by music, as Parsons picks a song for each bar. If you’re someone who has enjoyed a night at a favorite lounge, tavern, saloon, gin mill or just bar until the wee hours with pals (and I sure hope you are), you won’t want to miss Last Call—or the events with Parsons (you also might catch him outside of the events at some of his Seattle favs like Palace Kitchen, Rob Roy and Barnacle).

Those who want to enjoy a cold craft beer in Washington state have no shortage of options. The state has 437 craft breweries, according to the 2021 report from the Brewers Association. This trade group based in Boulder, Colorado, represents small and independent craft brewers across the United States. That’s up significantly from 2011, when…

The best sparkling wines for fall

Reality check: sparkling wine doesn’t only have to be uncorked during the holidays or hot weather. In fact, it shouldn’t be reserved exclusively for New Year’s Eve while wearing those stupid glasses molded into the shape of numbers and/or enough sequins to power a drag show. Nor should it only be for summertime wedding toasts…

From the pool to the campfire, enjoy these warm-weather beverages

During the precious warmer months in Seattle, let’s admit that it’s all a little too easy to flick the tab on a tallboy of Elysian Space Dust IPA when the thirst for an adult beverage strikes. It’s lazy, but not all of us have the air conditioning — or motivation — to put forth much…

It’s been years since Bob Monroe has had more than a sip of his own beer. That’s about to change. Shortly after cofounding the popular Figurehead Brewing Co. in Seattle five years ago, Monroe got some surprising news: He had an autoimmune disease that makes him prone to pancreatitis. He was told if he continued…